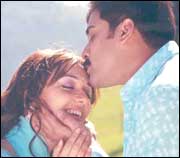 Deepa Menon / fullhyd.com
EDITOR RATING
3.0
Performances
Script
Music/Soundtrack
Visuals
NA
NA
NA
NA
Suggestions
Can watch again
NA
Good for kids
NA
Good for dates
NA
Wait to rent it
NA
Lakshmi really does seem to have found a niche for herself as the definitive Bitch On Wheels. Her roles both as the vindictive granny in Hulchul and the power-mad landlord in Sakhiya are convincing and a little scary. Me votes a whole movie made just around her; eliminate the chokra-chokris and give her something she can really sink her claws into. It's sad to see such a talent for viciousness wasted on pasty faced heroes and a cop-out script.

Sakhiya is a vague sort of film that you can't honestly hate or like. Contrary to popular belief, this is not a good thing. You get restless as a vague story gets buried in vague-er details and emerges hours later with an air of confused triumph. If we were hip we would say, whatever.

Hari is a precocious lad who can talk his way out of any situation that involves people dumber than himself. He gets caught in a mess of a scene when his older brother is hauled to jail for a robbery he did not commit, and the law demands full repayment. As he sets out collecting money, Hari (Tarun) chances upon a helpless little lady whose life needs immediate rescuing (Lakshmi).

Pleased by his abiding interest in the well-being of a complete stranger he met on the train, Durga Devi (the rescued lady) makes him a dubious offer - fetch my absconding daughter from Switzerland and I shall reward you richly. Thoroughly satisfied by these details, Hari sets out to dupe a girl he's never met and bring her to a woman he barely knows in exchange for money he's not sure exists. Nice.

Hari and Chandana (absconding daughter) fall in love in Switzerland, much to the amusement of the gora by-standers. But when he brings her (Nauhid) to her native village, he realizes - gasp - that the woman he's working for is an evil maniac. Durga Devi tends to chop off heads she finds annoying and has a bodyguard of looming he-men who take orders very well.

Now Hari must rescue Chandana and take her to her original family that looks every bit as menacing as the opposition party. Blood, guts, gore and a few frantic dances later, the enemy is vanquished and love beams toothily.

The song-and-dance routines are strategically placed in order to give you a chance to leave the theater and get home early. Just as the hurt and traumatized heroine makes her way to her hospital-bound hero, we cut to a song sequence featuring flabby dancers and manly pink pants wrought with manly sequins. Very cool.

The comedy is decent in parts, and, Lakshmi plays the deranged princess with skill. Neither Tarun nor the girl is given anything special to do and there's a whiff of campus-canteen about them that no amount of blood and grime can obscure. On the whole, nothing to write home about unless you're looking for sympathy.
Share. Save. Connect.
Tweet
SAKHIYA SNAPSHOT

ADVERTISEMENT
This page was tagged for
Sakhiya telugu movie
Sakhiya reviews
release date
Tarun, Nauhid
theatres list
Follow @fullhyderabad
Follow fullhyd.com on
About Hyderabad
The Hyderabad Community
Improve fullhyd.com
More
Our Other Local Guides
Our other sites
© Copyright 1999-2009 LRR Technologies (Hyderabad), Pvt Ltd. All rights reserved. fullhyd, fullhyderabad, Welcome To The Neighbourhood are trademarks of LRR Technologies (Hyderabad) Pvt Ltd. The textual, graphic, audio and audiovisual material in this site is protected by copyright law. You may not copy, distribute, or use this material except as necessary for your personal, non-commercial use. Any trademarks are the properties of their respective owners. More on Hyderabad, India. Jobs in Hyderabad.