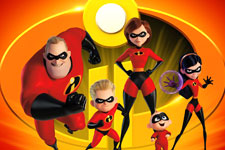 T J Reddy / fullhyd.com
EDITOR RATING
7.0
Performances
Script
Music/Soundtrack
Visuals
8.0
5.0
10.0
10.0
Suggestions
Can watch again
Yes
Good for kids
No
Good for dates
No
Wait for OTT
No
In the before times and the long, long ago, Pixar Animation Studios used to make wholly original content. Because great original ideas don't come around every single day, Pixar looked at their catalogue and asked themselves, "What here can be made into a franchise?" It began with Toy Story 2 followed by Toy Story 3. Yay. Then there was Cars 2. Uh-oh. Then came Monsters University. Um. After that, Finding Dory made its way onto screens. Something isn't right here. And finally, there was Cars 3. Houston, we have a problem.

Now we have Pixar's premier, Nietzsche-powered superhero family making their way onto our screens for the second time with a hope of turning the tide. And for the most part, it is good news.

So the Supers still live in a world that outlaws their existence, and are forced to keep their uniqueness hidden away from society, lest they offend the normies. But billionaire businessman Winston Deaver (Bob Odenkirk) and his sister Evelyn (Catherine Keener) have made it their mission to bring Supers back into society. They enlist the help of Elastigirl (Holly Hunter) and slap body cameras on her supersuit in an effort to show that her actions result in more good than harm.

Perfectly placed amidst these socio-political developments is a bad guy to defeat simply known as Screenslaver. The gauntlet is set. Defeat the bad guy. Show it to the world. Legalise Supers. Live happily ever after.

If only things were that simple. There are babies to be taken care of, teenagers to be dealt with, male egos that have to be contained, and tons of math homework Mr Incredible (Craig T Nelson) has to learn.

The family dynamic and political commentary-infused storytelling make Incredibles 2 rewarding while discussing its many ideologies more than while watching it as an isolated cinematic experience. The movie has spellbinding action, gut-busting humour, top-notch animation, characters we love and relate to, and Disney's self-sufficient marketing machine that is destined to butts in seats. To its determent, the film relies on all these aspects a tad more than it should.

In the words of Tom Hardy's Eames from Inception, a complex idea needs to be simplified to its very essence before a person well and truly absorbs every facet of it. Syndrome from the original Incredibles had a line that went "If everyone is super, no one is". This sentiment was in direct contradiction with the view of the world of Bob / Mr Incredible and the lessons he imparted to his children. The conflict here was bulletproof from both ends. The Screenslaver's ideology, while intellectually stimulating, isn't presented as well as it needed to be. We as an audience are either pro-Super or anti-Super, but at no point are we ever pro-Screenslaver. The script's many logical loopholes could have been overlooked if the movie fixed the primary one.

However, the voice acting presented in the film along and its exceptional score are par excellence. We are one step away from letting our inner Dash out and giggling uncontrollably at how much we loved the extraordinary auditory experience. Composer Michael Giacchino and the voice cast's clear understanding of the story, stakes and characters help them put nearly every MCU score to shame, and stand shoulder to shoulder with Hans Zimmer and Junkie XL's inspired work with the DC extended universe. And the lesser we talk about the Fantastic Four films, the better.

That last statement applies to the movie's visual presentation as well. The unique ways in which the characters use their superpowers cannot be assigned proper superlatives. There is thought, intelligence and sheer vision put into making these fight, chase and comic sequences peerless. High-quality animation sans imagination can make your film look good, and as we all know, beauty is only skin deep. The visual brilliance populating this movie serves as a reminder that the ill-effects of poor pacing, thin (and in some cases, unresolved) storylines and weak characters can all be alleviated by thoughtful packaging.

14 years is a long time. Technology has improved by leaps and bounds. Films and filmmakers have fresher takes on society and newer stories to tell. Audiences are divided into socio-political lines. And in those 14 years, I, for one, have doubled in age. 14 years is a long gap between a movie and its sequel. But through all those years, I have returned to the first Incredibles simply because it is that damn good. Will I return to the first Incredibles 14 years from now? Yes. Will I return to its sequel just as often? The jury just came back in, and even though they enjoyed the film on their first viewing, the long-term verdicts don't look good.
Share. Save. Connect.
Tweet
INCREDIBLES 2 (HINDI) SNAPSHOT 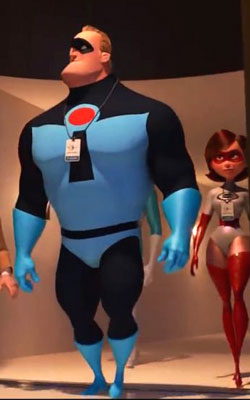 ADVERTISEMENT
This page was tagged for
incredibles2 in hindi
incredibles 2 hindi
Incredibles 2 (Hindi) hindi movie
Incredibles 2 (Hindi) reviews
release date
Follow @fullhyderabad
Follow fullhyd.com on
About Hyderabad
The Hyderabad Community
Improve fullhyd.com
More
Our Other Local Guides
Our other sites
© Copyright 1999-2009 LRR Technologies (Hyderabad), Pvt Ltd. All rights reserved. fullhyd, fullhyderabad, Welcome To The Neighbourhood are trademarks of LRR Technologies (Hyderabad) Pvt Ltd. The textual, graphic, audio and audiovisual material in this site is protected by copyright law. You may not copy, distribute, or use this material except as necessary for your personal, non-commercial use. Any trademarks are the properties of their respective owners. More on Hyderabad, India. Jobs in Hyderabad.