Tej I Love U Review 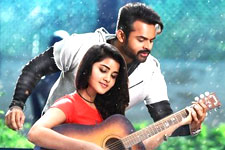 Veturi Sarma / fullhyd.com
EDITOR RATING
5.0
Performances
Script
Music/Soundtrack
Visuals
5.0
4.0
6.0
6.0
Suggestions
Can watch again
No
Good for kids
Yes
Good for dates
Yes
Wait to rent it
Yes
Hero part of a music band - check. Impossibly nice family members with negligible differences of opinions - check. Insufferably cute heroine who appears in angelic white for the first time to the hero - check. And add to this all the climax at the airport. Throw in a memory loss episode in the middle to divide everything neatly into two halves, and voila, we have the recipe for the new Karunakaran movie. So old and stale that we probably need to appreciate the makers for mustering any enthusiasm for making this into a movie.

Tej I Love You follows each of these familiar tropes in narrating the story of an orphan Tej (Sai Dharam Tej) with a giant extended family. As a kid, he saves an NRI couple from goons, and ends up killing one of them and going to jail. The wife (Pavitra Lokesh) writes a check for the kid in a show of gratitude but the ignoble husband (Anish Kuruvilla) makes sure it doesn't reach Tej. Their daughter Nandini (Anupama Parameswaran) learns of her father's subterfuge and travels back to India to meet Tej and thank him / fall in love with him / give him a new check / whatever.

She conveniently forgets the task on hand once Tej sets her sight on her, and the two quickly morph into Tom and Jerry, not just in characters but also in their antics. The fun and games last for a while as Nandini tries to convince Tej that she is the daughter of a Commissioner and makes him dance to her tunes. It's all harmless levity for an hour till the director decides to move the story ahead and Tej proposes her saying that he fell for her on the very first day he saw her. But before Nandini can accept Tej's love, she meets with an accident and forgets the previous three months and 12 days of her life.

Nandini's father sees it as a chance to take her away from Tej, but Tej's gang will have none of it. They make plenty of plans and stories to get her memory back, but each of them backfires. Meanwhile Nandini comes to know that she came to India to find out the kid who saved her mother's life, and goes on a road trip to Vizag with Tej to find him. Before they reach Vizag, everything falls into place through a million coincidences. You won't know if she's gotten her memory back, but she and Tej re-unite at the airport and that's that.

The memory loss angle on which the film pivots has been done to death in the movies, and it's no surprise that it never works anymore. Karunakaran can't fare any better with the device, and instead works on the script with his trademark assurance and a languid pace. He ensures that the saccharine levels never drop and that the movie doesn't take itself too seriously, resulting in a harmless film that can help you have a reasonably decent time if you don't decide to poke fun at the happenings onscreen. It's a low bar, but they appear to be conscious about it, and to their credit they don't cram unnecessary drama or heavy-duty dialogues to make the movie any deeper than it deserves to be.

The lead pair is just about right for this romance. Sai Dharam Tej always looks comfortable with Anupama Parameswaran, but he is not very good with the family crowd around him. He dusts himself off gamely after every scene he can't pull off convincingly and gets ready for the next one with the same earnestness. Anupama gets a meaty role where she gets to make faces, pout, sing and dance, and even shed an occasional tear all the while wearing copious amounts of makeup. The lead pair might not be able to create memorable characters out of their roles, but they do quite well with what they have.

The film looks vibrant - a Karunakaran touch - as Andrew's frames are filled with lot of colours, bursting at the seams with the people in it. Gopi Sundar's music and score are decent enough to make the movie float along breezily without hurting any of your senses. It's a neatly packaged film, and that's perhaps the best that can be said about it.

Tej, I Love You is not objectionably bad, and after his recent series of debacles it must come as a relief to Sai Dharam Tej. He will take it, but that may or may not be reason enough for you to.
Share. Save. Connect.
Tweet
TEJ I LOVE U SNAPSHOT 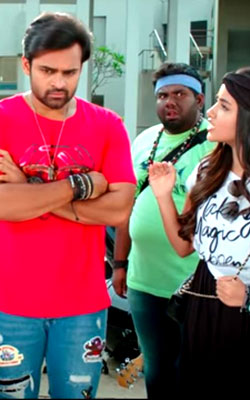 ADVERTISEMENT
This page was tagged for
Tej Love movierulz
Movierulz tej Iove you talugu
movierulz tej
tej ilove you full movierulz#spf=1579333899970
tej i love you full movie in telugu
Follow @fullhyderabad
Follow fullhyd.com on
About Hyderabad
The Hyderabad Community
Improve fullhyd.com
More
Our Other Local Guides
Our other sites
© Copyright 1999-2009 LRR Technologies (Hyderabad), Pvt Ltd. All rights reserved. fullhyd, fullhyderabad, Welcome To The Neighbourhood are trademarks of LRR Technologies (Hyderabad) Pvt Ltd. The textual, graphic, audio and audiovisual material in this site is protected by copyright law. You may not copy, distribute, or use this material except as necessary for your personal, non-commercial use. Any trademarks are the properties of their respective owners. More on Hyderabad, India. Jobs in Hyderabad.