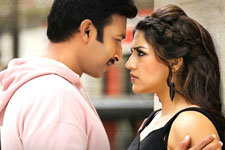 Veturi Sarma / fullhyd.com
EDITOR RATING
3.0
Performances
Script
Music/Soundtrack
Visuals
5.0
2.0
3.0
6.0
Suggestions
Can watch again
No
Good for kids
No
Good for dates
No
Wait for OTT
Yes
In Gopichand's 25th film he does what he has always been doing, except that he does them with a stubble in the first half and a goatee in the second. And there is little of what worked in his previous films and more of the same old action sequences and ill-timed songs. One can only wish the landmark film might trigger introspection, for the man looks like he could do with some.

The movie begins with a series of robberies committed by Vikranth (Gopichand) along with his sidekick (Srinivas Reddy). These are basically vignettes of tomfoolery and the usual gravity-defying stunts ending with slow-motion shots of the thieves walking away with the loot. The victims are all benamis of a corrupt minister Naik Bhai (Sampath Raj), and he screams his guts out instructing everyone in sight to catch the thieves.

Anyone who can put two and two together in the audience knows that the thief is indeed a Robin Hood. And Achari (Thanikella Bharani), a private investigator hired by the minister, tells them that the thief is Vikranth Surana of the world-famous Surana industries, and that he gives all the money to the victims of serial bomb blasts who are waiting forever for the ex-gratia announced by the government to arrive. Why the multi-millionaire decides to spend his time robbing people is revealed in a flashback straight out of Srimanthudu, only a little less effective this time.

Vikranth surrenders in front of the media with all the loot and puts all the blame on politicians, bureaucracy, the common man and whoever else he can point his finger at. You must be wondering by this time that we missed a key thread and character in the narrative. We apologize - there is also a romance involving Akshara (Mehreen Pirzada) that takes up about 10 minutes and 2 songs in the first half, and 3 minutes and 2 songs in the second, even those testing your patience.

Pantham is mounted on 3-4 pivotal scenes that are put up at the right places, but the moments in the narrative leading up to them are pretty lacklustre. K Chakravarthy's script (screenplay: K S Ravindra, Ramesh Reddy) doesn't build any suspense or lend any edge to the narrative. An overwhelming sense of boredom pervades the film all through even though the twists are revealed with a dramatic score and theatrics.

The film obviously borrows from Shankar's Gentleman, but the hero being ultra-rich and not among the victims of the blast becomes an outsider to the proceedings. Despite the kind-hearted Vikranth taken in by the plight of the poor, the audiences are not invested in his pantham since he has nothing to lose even if everything goes wrong.

It then falls upon the actors to provide something to enhance the material. Gopichand however doesn't put in any special effort, and merely looks prim and sauve. We know he can spout the dialogues, but this film needed a little more than that. Sampath Raj probably drew the short straw between him and Mukesh Rishi, and gets to be the main villain. But not only is he no match for the all-conquering hero, he also gets on your nerves with his high-pitched screaming and desperate antics.

Mehreen as we already noted has lesser screen time than even Rahul Dravid in the anti-smoking ads, and that is not a bad thing to happen for her or for the movie since the romance is pretty laughable. There are also a whole lot of comedians and character artistes all over the movie who go through their motions and seem to wish for this to end.

The makers have spent a bomb on this, shooting in exotic locales and filling frames with more actors and colours than you can take in. However it all doesn't matter thanks to the generic script and tedious narration. Gopi Sundar's music and background score are forgettable. Prasad Murella ensures that he gets everybody in the frame, and Pravin Pudi ensures that the film ends at some point.

If there was any belief in anyone who worked for this movie that it would work, we would like to ask them what, how and why.
Share. Save. Connect.
Tweet
PANTHAM SNAPSHOT ADVERTISEMENT
This page was tagged for
pantham movie telugu review
Pantham telugu movie
Pantham reviews
release date
Gopichand, Mehreen Pirzada
Follow @fullhyderabad
Follow fullhyd.com on
About Hyderabad
The Hyderabad Community
Improve fullhyd.com
More
Our Other Local Guides
Our other sites
© Copyright 1999-2009 LRR Technologies (Hyderabad), Pvt Ltd. All rights reserved. fullhyd, fullhyderabad, Welcome To The Neighbourhood are trademarks of LRR Technologies (Hyderabad) Pvt Ltd. The textual, graphic, audio and audiovisual material in this site is protected by copyright law. You may not copy, distribute, or use this material except as necessary for your personal, non-commercial use. Any trademarks are the properties of their respective owners. More on Hyderabad, India. Jobs in Hyderabad.