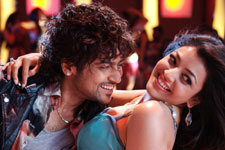 In a scene in Brothers, the Telugu-dubbed version of Maattraan, a ruthless corporate honcho whose seemingly harmless food product is on its way to killing an entire generation of Indian kids, is chased down by a mob of villagers and beaten up. Before he goes on to die a death of unprecedented indignity.

Sigh. If only this were the story of Union Carbide.

Brothers is a sci-fi film with a promising idea, combining as it does reality and a dystopian view of life. Suriya plays the conjoined twin sons, Vimal and Akhil, of a genetic engineering scientist Ramachandra (Sachin Khedekar). Akhil is the happy-go-lucky curly-haired one while Vimal is the goody-goody kinds with neatly-combed hair. Ramachandra's company, with its Energion brand, is the leader of the health drink market. In a romantic side-plot, Vimal is attracted to Anjali (Kajal Aggarwal), who is an employee of Ramachandra's competitor.

Olga, a journalist from "Ukvania" (what is with this need to make up country names?) lands up on the scene, bent on stealing the Energion formula. Olga hangs out with the twins, who are warned by Ramachandra of her intentions. Vima gets suspicious of her motives, even as he dismisses his doubts with a "She can't do anything - she's a dumb chick". Who is Olga? Who planted her on the scene? What is Olga hiding?

Brother deals with the larger themes of corporate greed and merciless nationalistic ambition, and talks about how they are furthered by the tools of genetics. It is fantasy wedded to realism in a way, and this makes for an engaging concept. Given that even the ostensibly benign (and almost holy) Johnson & Johnson is now known to use formaldehyde and other harmful (some carcinogenic) chemicals in its products, Brothers is not way off in its imagination. Plus, there is also talk of designer babies.

Like we said, these are good ideas. It all logically adds up to an engrossing thriller, a film you'd not change channels on. Even without the fact that this has twice the amount of Suriya than usual.

What goes wrong is the movie's disturbing focus on the wrong things, in the way of most Tamil movies. For instance, there is a detailed scene of a surgery performed on the conjoined twins.

Also, despite the film having a high concept, there is surprisingly little class in execution. For example, the chilling depictions of the after-effects of a poison-laced product on athletes who have been made to drink it for years are low on imagination. And with the nauseating ending leaving a sour taste in your mouth, you are likely to walk out of the theatre displeased.

This being a film about corporate crime, there seems to be a pressing need to infuse frustratingly dumb characters all over - empty-headed people who do not seem to think before they strike conversations about "something wrong" happening in the company's plant. As a result, the most obvious targets get bumped off in murders you can sniff from 10 minutes away. The problem isn't about the murders - Kahaani had innocent people getting killed, too, but there was an element of unexpectedness there.

Meanwhile, does the concept of the conjoined twins work? The film attempt to be sensitive about the condition, but it is a tool to showcase some cinematic technology and some innovative gimmickry like dances and fights (watch out for the 15-minute fight in the amusement park), which works for its part. The director seems to have given up on handling this inconvenient genetic accident after a while.

Suriya is quite polished in his performance. Kajal can be said to have been given a woman-centric role, by south Indian film standards, since she stars as a translator and is present in all crucial scenes. Sachin Khedekar has a strong presence.

The music isn't anything to write home about. The visuals deserve lots of credit, at least for the way the twins have been shown on screen.

Brothers could have been far better if it prioritized well. If you still think you can stomach it, watch it by all means, but we'd rather you catch it on TV.
Share. Save. Connect.
Tweet
BROTHERS SNAPSHOT 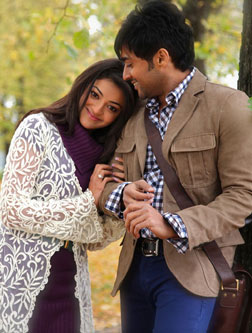 ADVERTISEMENT
This page was tagged for
telugu brothers movie tamilrockers2015
brothers telugu movie review
Brothers telugu movie
Brothers reviews
release date
Follow @fullhyderabad
Follow fullhyd.com on
About Hyderabad
The Hyderabad Community
Improve fullhyd.com
More
Our Other Local Guides
Our other sites
© Copyright 1999-2009 LRR Technologies (Hyderabad), Pvt Ltd. All rights reserved. fullhyd, fullhyderabad, Welcome To The Neighbourhood are trademarks of LRR Technologies (Hyderabad) Pvt Ltd. The textual, graphic, audio and audiovisual material in this site is protected by copyright law. You may not copy, distribute, or use this material except as necessary for your personal, non-commercial use. Any trademarks are the properties of their respective owners. More on Hyderabad, India. Jobs in Hyderabad.