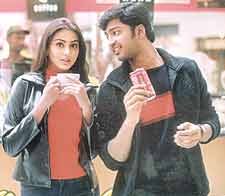 A glorified pleasantry-coated imitation of the offbeat classic Dil Chahta Hai, Sontham merely adds yet another vibrant brick to the ape-movie wall of fame, and we snoots at fullhyd.com, ninety-nine times out of hundred, are not happy for/with these remakes. However, fortunately for Sontham, it has some good things (petite variances in plot, decent music and admirable Sunil-ing... er, clowning) going for it that most of the bygone ill-fated and dear departed remakes didn't.

Sontham is a tale of three best friends - Vamsi (Aryan Rajesh), Bose (Rohit) and Nandu (Namitha) the Nandini. Reminiscent of DCH, Vamsi is the vivacious Akash, Bose is the somber Sid, and Nandu is both the sparkling Sameer and the sexy Shalini come together (how very clever, ain't it?!). And then, to squeeze the story into a few words, it is all about how Vamsi, an unfaltering nonbeliever of love, realizes that he is actually in love with Nandu, and about the victory of their love against all odds.. 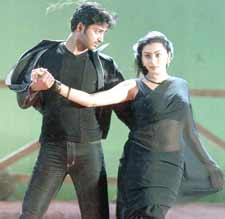 Aryan Rajesh unquestionably performs well compared to his debut dud Hai. All the same, he still needs to step up in crucial areas like facial expressions and dialogue delivery. Reading from his unchanged physique, he must be dangerously in short of attendance at the local gym. Blind me Holy Christ, his rapping zillions of goons in one go must be lulling oodles of thin guys out there into

Namitha, choochie-faced curvy tubby lass, has managed to pull off a swell show in her debut venture. Worth mentioning is the comedy-duo Sunil and MS, which spawns brilliant comedy in the first half that has you almost rolling with laughter. And then, ah, Telangana Sakunthala...! Her act as a vile, angry and criminal mom (aw, pity Sunil) is not a needle short of a scrrrrream. And last but not the least, the rendition of background score and music by Devi Sri Prasad could be deemed as appropriate for a flick like this.

ADVERTISEMENT
This page was tagged for
sontham greatandhra review
sontham movie
sontham movie review
sontham movie hit or flop
sontham telugu movie
Follow @fullhyderabad
Follow fullhyd.com on
About Hyderabad
The Hyderabad Community
Improve fullhyd.com
More
Our Other Local Guides
Our other sites
© Copyright 1999-2009 LRR Technologies (Hyderabad), Pvt Ltd. All rights reserved. fullhyd, fullhyderabad, Welcome To The Neighbourhood are trademarks of LRR Technologies (Hyderabad) Pvt Ltd. The textual, graphic, audio and audiovisual material in this site is protected by copyright law. You may not copy, distribute, or use this material except as necessary for your personal, non-commercial use. Any trademarks are the properties of their respective owners. More on Hyderabad, India. Jobs in Hyderabad.