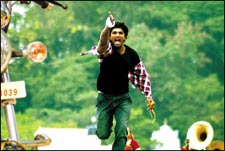 Deepa Garimella / fullhyd.com
EDITOR RATING
7.5
Performances
Script
Music/Soundtrack
Visuals
8.5
7.5
8.0
8.0
Suggestions
Can watch again
Yes
Good for kids
No
Good for dates
Yes
Wait for OTT
No
In Krish's sepia-tinted world, the rich have it easy. The right-wingers have it easy. The money-extorting goons have it easy. The kidney-selling middlemen have it easy. The exploited, on the other hand, have sensitivity, sarcasm and a sense of humour. And one hell of a writer.

So, Vedam. Where thumbing your nose at the shallowness of the wealthy feels classy. Indeed, Vedam runs the risk of being termed too leftist for commercial taste, if only it didn't get so many things right.

The plot traces several threads that all converge in the city of Hyderabad. Cable Raju (Allu Arjun) is a cable operator who lives a wretched life in Jubilee Hills slum, and whose "love" lies right across the drain, in the real, moneyed, Jubilee Hills. He's netted her for her money, and she's sufficiently airheaded to believe that he's rich and educated.

Saroja (Anushka) is a star prostitute in Amalapuram, who is set to escape to Hyderabad along with her friend, in order to set up her own "company".

Vivek Chakravarty (Manchu Manoj) is an army officer's son who suffers internal conflicts that only the well-heeled can afford to suffer - he wants to become a rock star.

Then, there's a destitute weaver family from Karimnagar, whose school-going child is being forced into bonded labour. To free the kid, the family must pay up an obscene amount of money - the exact obscene amount, by the way, that our cable-wallah friend must pay a hotel for one New Year's Eve party that his girl wants to attend.

A Hindu-Muslim conflict is ambitiously shoved into the script. Manoj Bajpai plays Raheemuddin, a man who is wronged by a seemingly insensitive police department thanks to his religion.

Vedam's problem is that it grapples with several issues at once. The layers, they may have been a writer's delight, but the ever-fattening basket of topics that Krish wants to try his hand on gets tiresome at times. The film also moves into melodrama territory some times - for example, the cliched emergency care sequence in the hospital, where the heartless doctors want a police report before saving a life.

However, thanks to its length, the fun is that before you wonder if it's biting off more than it can chew, you realize it's even done with dessert. Needless to say, the "have versus have-nots" satire seemingly tops the list. Then, of course, are the all-too-obvious issues - communal clashes, kidney trade, the police force's coziness with the prostitute class.

Neatly conceptualized scenes showcasing humanity and goodness, though, are the snippets that end up blowing you away. In fact, sometimes, Vedam's little touches and sub-texts make a larger impact than the headlining themes.

The story-telling style screams new-age, thanks to the spontaneity in performances and the subtlety in the humour. The only aberration is Anushka's track, which is in stark contrast to the rest of the flick - her portions are characterized by bizarrely theatrical acting and retro music.

And then, there's the cast. Though the 3 leads share almost negligible screen space (and Arjun and Manoj share almost none), the fact that this is a multi-starrer is a private victory for Telugu movie fans.

Cable Raju is as likely to be stuck in Tollywood memory as Gaali Seenu was, and that is partly to Allu Arjun's credit. His is not a role that is art-movie-ishly extraordinary, but his energy is infectious, and he's brilliant as always. Cable Raju, in fact, is largely a comedy track, and one of the most soothing things this movie offers.

Anushka is quite striking in every frame, and her real triumph is in the fact that she's irreplaceable. The person who plays Karpooram, her hijra sidekick, is brilliant, too.

An all-too-evident oddity is the fact that Manchu Manoj is credited for making a "guest appearance", when clearly there's more. And if indeed there was much more to that "more", it's a pity we get to see only what we did - his could have been an interesting track.

And there's more - Satyam Rajesh, Raghu Babu and Brahmanandam pitch in for more comic relief. There's even more - Posani features in the flick.

Keeravani is spot on with the emotions dealt with in every number; and also with every character that the background track is set against. The visuals are slick, with visibly western influences.

This one is a movie for several kinds of fans of Telugu cinema. Hopefully, you fit in somewhere.
Share. Save. Connect.
Tweet
VEDAM SNAPSHOT

See Vedam full details
VEDAM USER REVIEWS
1 - 12 OF 12 COMMENTS
POSITIVE  |  NEGATIVE |  NEWEST  |  OLDEST  |  MOST HELPFUL  |  LEAST HELPFUL
USER RATING
8.2
17 USERS
Performances
Script
Music/Soundtrack
Visuals
8.4
8.2
7.9
8.1
Can watch again - Yes
Good for kids - Yes
Good for dates - Yes
Wait for OTT - No
Feroze on 7th Nov 2013, 5:07am | Permalink
My respect for both Krish and Bunny has grown so much after watching this movie. A narration of 5 tales coming together in a spellbinding, completely shocking climax, this movie deserves every bit of praise its gotten. Amazing movie. If you're getting bored of a hero beating up 10 goons, winning a doll faced heroine, and riding off into the sunset, then this movie is exactly what you need.
raj777 on 12th Jun 2010, 10:59am | Permalink
simply superb no words to say
allu arjun rockss
krish excellent work

RATING
9
saradhi on 9th Jun 2010, 3:23pm | Permalink
Frankly speaking Manoj has rocked in this movie. I never appreciate Mohan Babu's sons for their action. But he simply outstanding in this movie. Arjun is good as usual, this role is a cakewalk for him. I think Anushka is the only female lead who can suit for any kind of roles these days. Perfect actress and excellent face expressions. Manoj Bajpai as usal outstanding. Somehow I am not impressed with the oldman's performance although the character was designed excellently. Inspector's action is very good. This guy should be given more action oriented roles. overall the credit goes to Krish.

Hey, remember one thing! If you want to go for couple of hours of entertainment, skip this movie. If you want to see a really good movie, don't miss this one. Finally, encourage this kind of movies.

Nagaraju Molli on 9th Jun 2010, 1:54pm | Permalink
Vedam is a classic master piece. we have seen few bollywood and hollywood flicks with such a billiance narration. The way 5 stories start and end up together where an audian do not even have a complain. The way stories pertaining to 'Cable Raju' , 'Rock star Manoj' & 'Mannoj bhanjpaii' were created is a work of master mind. I would not forget to thank 'Keeravani', this mastro is always in lime lite. We have seen his work during 'SS Rajamouli' Banner, but he is the guy who stricks back for any other who has clarity in what he needed. Krish has done his job in getting the things rite especially the last 30mins of the movie keeping audience spell bounded. Allu Arujun should need a special page for his miracelous acting and skinning into the role. Great Job PAL.
After long time this is a movie for all categories, and a great work after POKIRI and MAGADHEER. This one deserves a National award for the director, music, screenplay. Good luck!
RATING
9
Mr.D on 7th Jun 2010, 2:45pm | Permalink
Excellent movie after long time. I am sure this is going to get Nandi Award.

Every one justified their role. There are couple of emotional scenes which melts your heart and make you cry. I loved it.


RATING
10
Sidharth on 7th Jun 2010, 11:54am | Permalink
Watched Vedam on first day. Decent movie with good performances. My favorite was Allu Arjun with his perfect emotions and flowing comedy - He was fantastic. All the young ladies in the movie were beautiful with decent performances. Anushka is beautiful but I felt her expressions, moves and dance could have been much better. The biggest plus point of this movie is its original story blended with nice Telugutanam. Good music, great Editing and Screenplay make it a must watch. Great followup for Prasthanam. Happy to see good movies different from regular bullshit.

RATING
9
Phaneendra Kumar on 5th Jun 2010, 9:30am | Permalink
The movie is good for Telugu industry definitely. The casting was good and a big experiment that gave some positive results.

The first half of the movie doesn't have any story and tends to bore you. The script tried very hard to establish all the characters in the first half and doesn't concentrate on the story. But, the second half is power packed and gets the best of writing supported by performances. Nagayya as Ramulu is awesome. Arjun is his usual energetic. Anushka is sexy and innocent at the same time. Manoj is good for his role. Manoj Bajpai has done justice to his role.

Overall, this movie has a potential to change the industry norms and standards if taken in right sense and elevate the movie making art. Full credit has to be given to Krish, the director.

RATING
8
bobby3926 on 4th Jun 2010, 9:12pm | Permalink
Vedam movie makes the tollywood again look towards multi starrer pictures.
Attempt by Krish was excellent he did splendid job. story narration and Screenplay was so nice and catchy.
Cable Raju (Allu Arjun) done an excellent job with his performance. He completely steals the Show.
overall movie was excellent and a must watch film. go and just watch movie u will watching a nice film and u will know tollywood had an sensual directors

ADVERTISEMENT
This page was tagged for
vedam movie full review
Vedam telugu movie
Vedam reviews
release date
Allu Arjun, Anushka
Follow @fullhyderabad
Follow fullhyd.com on
About Hyderabad
The Hyderabad Community
Improve fullhyd.com
More
Our Other Local Guides
Our other sites
© Copyright 1999-2009 LRR Technologies (Hyderabad), Pvt Ltd. All rights reserved. fullhyd, fullhyderabad, Welcome To The Neighbourhood are trademarks of LRR Technologies (Hyderabad) Pvt Ltd. The textual, graphic, audio and audiovisual material in this site is protected by copyright law. You may not copy, distribute, or use this material except as necessary for your personal, non-commercial use. Any trademarks are the properties of their respective owners. More on Hyderabad, India. Jobs in Hyderabad.