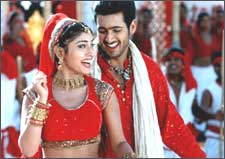 I was very surprised when I recently read the news that boredom is the leading cause of death in today's society and not Uday Kiran's acting as popularly thought. This piece of information must indeed be disturbing to most guys out there whose name is not Uday Kiran. Boredom is certainly not what a man believes he'd be bogged down by. He'd prefer bikini-clad women for that!

Anyway, as said earlier, and especially for the 'fans' of Uday Kiran (har!), his acting isn't lethal anymore. He's learnt the ABCs of acting after years of trying... the audience's patience! I'm giving this away at the very beginning in an attempt to start on a positive note. 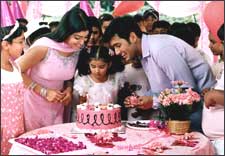 Neeku Nenu, Naaku Nuvvu might have made a hit, were it the name for Idly-Sambhar in a fancy hotel. It would've made a hit as a movie title too, provided the contents were not Idly-Sambhar. Thanks to the little details, Naaku... is not like them. It's just like an Idly - plain, old, boring and made out of a wet grinder.

Krishnam Raju makes a comeback into the unethical, crooked world of movies from his daily job of politics. Okay, so 'unethical and crooked' might not bother him, but wearing flashy clothes might. And if it does not bother him, it will certainly bother us. He plays a rich businessman, whose only business seems to be wearing designer clothes, slapping people around and looking at them as if they were casualties in a terrible car crash. He uses this look to good effect in the movie, for it makes his son Uday Kiran fear him indisputably. 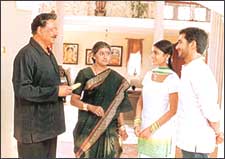 But there comes a time in every son's life when he has to cross his dad's ideals. Normally, the son then would have won a million dollars and does not need the ol' man for cash, temporarily at least. Here, Uday feels his million-dollar-lottery is Shreya. Romancing her in college, he thinks his dad would accept their love, but we know darn well that that will end the film. So here's the deal: Shreya is Krishnamraju's grand daughter and Shreya's mom eloped with Suman, so he hates love. Conclusion: 'Breaking discovery in the field of medicine! Replacement for sleeping pills found!'

Many people would feel short-changed about the slow pace of the film. Most of them would feel surprised at the fact that there was any pace in the first place. Technically speaking, this is a clean family flick that does not require us to carry our barf bags. But it fails miserably in the department of entertainment value - sleeping is usually not considered entertainment.

ADVERTISEMENT
This page was tagged for
Neeku nenu naaku nuvvu movie hit or flop
Neeku Nenu Naaku Nuvvu telugu movie
Neeku Nenu Naaku Nuvvu reviews
release date
Uday Kiran, Shreya
Follow @fullhyderabad
Follow fullhyd.com on
About Hyderabad
The Hyderabad Community
Improve fullhyd.com
More
Our Other Local Guides
Our other sites
© Copyright 1999-2009 LRR Technologies (Hyderabad), Pvt Ltd. All rights reserved. fullhyd, fullhyderabad, Welcome To The Neighbourhood are trademarks of LRR Technologies (Hyderabad) Pvt Ltd. The textual, graphic, audio and audiovisual material in this site is protected by copyright law. You may not copy, distribute, or use this material except as necessary for your personal, non-commercial use. Any trademarks are the properties of their respective owners. More on Hyderabad, India. Jobs in Hyderabad.