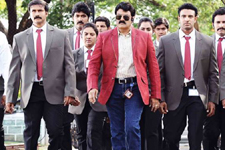 Ravi Kandala / fullhyd.com
EDITOR RATING
4.0
Performances
Script
Music/Soundtrack
Visuals
5.0
3.0
3.0
5.0
Suggestions
Can watch again
No
Good for kids
No
Good for dates
No
Wait to rent it
No
The Hindi remakes of South-Indian films are usually ridiculed for being star vehicles. When you see movies like Lion, you know why. Lion's first song has two have-been actors Siva Balaji and Archana singing praises equating the hero to Lord Krishna. Balakrishna, meanwhile, is standing in the centre of the frame soaking in all the attention and doing a step or two in between. The song is there for no purpose other than deifying the leading man who attains godly status by beating up a bunch of goons teasing Archana and lecturing them about respecting women. That the same man refers to two heroines as liquor chukka and chicken mukka should not even be taken into consideration.

Lion, then, is a full-on star vehicle for NBK - the only sad part being that the star himself looks so tired and jaded in the first half of the film that it is almost impossible to buy into him as a superhero or invest in any of the two romantic tracks.

The film shows a man waking up in a hospital after being in a coma for 18 months. Once he is awake, he calls himself Bose while people around him call him Godse. He remembers a different set of parents while a different set of people tell him that he is their son. Who is he then? Is this his memory playing tricks with him? And why are all the people he believes he knows behaving in such a strange manner? This forms the crux of Lion. And Balakrishna, obviously then, plays two roles - those of Bose and Godse.

Lion resembles films of the '80s. We were wondering why and then we found out that the director was a protégé of Dasari Narayana Rao - it suddenly made so much more sense. The director takes after his mentor and follows Dasari's filmmaking ethos to the T, leading to many archaic sentimental scenes. The pace of the film is also lethargic to a fault - more tortoise than lion. The romantic tracks are so terribly written and feel so out of place that even hardcore NBK fans will find them hard to digest.

Coming to the acting talent on display, Balakrishna looks his usual self in the Bose role, but old in the Godse role. The songs with the much younger heroines look awkward, and for some reason, the star himself seems pretty disinterested. You can hardly complain about his histrionics, but there's not much even he can do with these half-baked characters. Trisha and Radhika Apte are hardly there, as are the others in the supporting cast. All of them seem to acting more in a stage play and less in a movie, and take the film down a couple more notches.

Manisharma also seems to have given up. The BGM is filled with chants of "Bose, Bose", and the songs hardly register. Technically, too, the film does not rise above mediocre. The producers seem to have wrapped up the film within a decent budget, which is certainly a good thing in this case.

Lion will not excite the masses or the classes, but more importantly, even the hardcore fans are likely to be disappointed. Unless seeing humans bouncing higher and better than Bodyline bouncers is your kind of thing, stay far away.
Share. Save. Connect.
Tweet
LION SNAPSHOT 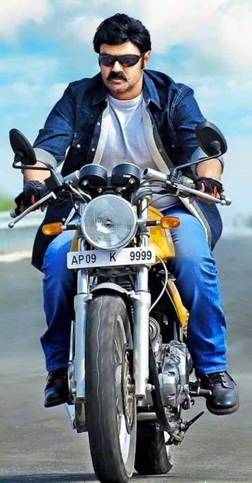 Wow, this movie is bad. Egregiously bad. Except for some unintentionally funny scenes. More on that later. SPOILERS FOLLOW.

First up, for the entire duration of the movie, I felt like I was back in the late 90s when the cinematography plain sucked. Most of the movie suffers from poor production values and has that distinct 90s B-grade movie feel. The graphics are bad and end up looking comical. The script seems to be written by someone who isn't tech savvy but was ordered by the director to "be inspired" by Hollywood movies. All the firewall mumbo-jumbo just ends up getting on your nerves and does not serve the purpose of portraying Balayya like a tech wizard.

Most of the cast looks like they owe the producer a favor and want to get it done with as quickly as possible. Balayya has tried time and again to be the Desi Tom Cruise (read the opening sequence of Vijeyendra Varma) what with his bike stunts and all but c?a?n?'?t? ?m?a?t?c?h? ?u?p? fails miserably here. The romance is insipid and unfortunately makes Balayya look like the lascivious uncle you want to avoid at weddings. Radhika Apte has two item songs, and Trisha has three. Prakash Raj could as well have asked the director to use the same shots that were used in The Businessman. Definitely not Mani Sharma's best work to date. The fight choreography is violent and enjoyable.

The first half goes nowhere. Picks up pace just before the interval and fizzles out before you know it. Indraja and Prakash Raj ham it up in the climax and it's hilarious at places. The only way you can enjoy the movie is if you have a bunch of friends who can make fun of stupid scenes that are asking for it. Otherwise, Balayya is the only saving grace.

ADVERTISEMENT
This page was tagged for
Lion telugu movie
Lion reviews
release date
Nandamuri Balakrishna, Trisha Krishnan
theatres list
Follow @fullhyderabad
Follow fullhyd.com on
About Hyderabad
The Hyderabad Community
Improve fullhyd.com
More
Our Other Local Guides
Our other sites
© Copyright 1999-2009 LRR Technologies (Hyderabad), Pvt Ltd. All rights reserved. fullhyd, fullhyderabad, Welcome To The Neighbourhood are trademarks of LRR Technologies (Hyderabad) Pvt Ltd. The textual, graphic, audio and audiovisual material in this site is protected by copyright law. You may not copy, distribute, or use this material except as necessary for your personal, non-commercial use. Any trademarks are the properties of their respective owners. More on Hyderabad, India. Jobs in Hyderabad.