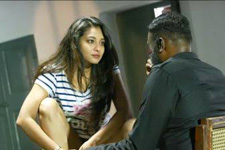 Chaitanya Karthik / fullhyd.com
EDITOR RATING
2.0
Performances
Script
Music/Soundtrack
Visuals
2.0
2.0
2.0
2.0
Suggestions
Can watch again
No
Good for kids
No
Good for dates
No
Wait to rent it
No
Remember that time when clickbait was mainstream? The links that used to convince you that clicking on them would blow your mind? We have something else now. Watchbait. Yedu Chepala Katha's promos promised that the movie would blow your mind - um, your pants, actually. And as in the case of clickbait, nothing particularly happens in the movie that blows whatever it intended to. But it does blow something - your time and money.

Yedu Chepala Katha managed to create a lot of hype before its release with all the sleaze. And it probably would have delivered on at least 50% of that hype if it weren't for the timely (or untimely) intervention of the censor board. They pretty much cut out every scene that brought attention to the movie in the first place. And the story doesn't make things up for an audience depleted of what they actually came to see.

Ravi (Abhishek Reddy) has this weakness where he goes batshit crazy every time he gets tempted upon seeing a woman dressed seductively. That leads to a cool first name for him - "Tempt" Ravi, he's called. And seven such women he sees and gets tempted by, jump the wall of his house and have sex with him while he's asleep. This is the part where it gets weird. He thinks all that intercourse is his dream. And the women too don't remember being at his place.

Then Bhavana (Ayesha Singh) gets pregnant (did you connect it already?) without knowing how and wants to commit suicide, but is prevented by an eccentric guy Sundar with some seriously cheesy motivational lines, who tells her that he can help her find out who got her pregnant in return for a favour - Sundar can talk to spirits and needs one to be let into Bhavana's body. And in all this there is a girl named Ammulu who is spurned by Ravi and kills herself. How all these threads intersect form the rest of the movie.

Abhishek Reddy and Bhanu Sri, who plays the role of Radha (Ravi's friend), are good in their roles. The other characters aren't that convincing, but that's not an issue because nobody really has much to do in the movie anyway, and the characters hardly have any depth to them. The background score is okay and the songs are fine, but they don't really help the movie in any way.

If you are still planning to watch this one, you need to ask some tough questions of yourself.
Share. Save. Connect.
Tweet
YEDU CHEPALA KADHA SNAPSHOT

ADVERTISEMENT
This page was tagged for
edu chapla katha fuck scene
Edu chepala katha movie summary
Taligu sex movie
Telugu latest edu chepala kathasex movies
480p yedu chapala katha
Follow @fullhyderabad
Follow fullhyd.com on
About Hyderabad
The Hyderabad Community
Improve fullhyd.com
More
Our Other Local Guides
Our other sites
© Copyright 1999-2009 LRR Technologies (Hyderabad), Pvt Ltd. All rights reserved. fullhyd, fullhyderabad, Welcome To The Neighbourhood are trademarks of LRR Technologies (Hyderabad) Pvt Ltd. The textual, graphic, audio and audiovisual material in this site is protected by copyright law. You may not copy, distribute, or use this material except as necessary for your personal, non-commercial use. Any trademarks are the properties of their respective owners. More on Hyderabad, India. Jobs in Hyderabad.