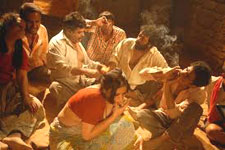 Veturi Sarma / fullhyd.com
EDITOR RATING
4.0
Performances
Script
Music/Soundtrack
Visuals
6.0
3.0
4.0
6.0
Suggestions
Can watch again
No
Good for kids
No
Good for dates
No
Wait for OTT
Yes
"I hate this story." That's what one of the protagonists says in this final installment of Dandupalyam as he walks away from the righteous reporter, after clearly having had enough of it. It was a rather cool way to end what can only be called an ambitious trilogy, for director Srinivasa Raju might have known what the audiences felt about the film, and lets them know he feels the same.

Raju has some more cool tricks up his sleeve - like how he starts the movie with the cops goading, coaxing and beating the confessions out of the Dandupalyam gang, making you side with the latter for a moment, and then does an entire U-turn on you towards the end.

Alas, those are all the good things about the movie - the beginning and the end. Bookended between those two high points are some really gory scenes of men raping and killing, cops kicking women across their faces and skinning criminals alive, some grisly close-ups of unkempt hair, chapped lips and stained teeth, and everyone calling everyone else "naa kodaka".

The intention was perhaps to shock, and the film goes all out with that - even after the censors blur some of the visuals, not much is left to imagination (if at all you want to imagine all that, that is). However, there were no gasps of shock, because whoever came in to watch this knew what to expect, and they were also bored by it all. Clearly three Dandupalyams are two too many.

The film appears to set in the late '90s. 5 years, around 80 murder victims, more than half of them also raped, and the Karnataka police doesn't even have a face to attach to the crimes. So Inspector Chalapathi (Ravi Shankar), with a history of thuggery, does some very basic police work (which is also what makes the film appear real, since there is none of the high-IQ analysis that is possible only in the movies) and catches the Dandupalyam gang. The cops really have to make everything stick to the gang, and so fabricate evidence, beat the members, and tire them into submission to get their confessions.

The only problem is that the gang talks to the righteous reporter (Shruthi), who writes about them and how the police could have fabricated some of the evidence. Chalapathi takes it upon himself to make the reporter see the "truth", and shows her the grotesque appearances of the gang and proceeds to narrate the police's version of things. The film ends saying that there is no absolute truth and we should be careful whom we open our doors to.

With the movie decidedly against taking sides, and not many recognizable faces, it falls upon the actors to make the audiences relate to them. However they are not given enough material to sink their teeth into, and need to resort to their all-weather skills to take on the roles. Ravi Shankar and Makrand Deshpande lead either side, and they understand what the director is looking for, and deliver. Pooja Gandhi seems to be always around with nothing much to do except squat and look determinedly and belligerently towards everyone. All other performances are uniformly over the top, which kind of goes with the territory. The background score comes to life only when there is a heinous act being committed on screen, as if in protest against the act getting blurred, but otherwise stays clear of the movie.

As you walk out of the theatre you wish you could have taken the movie a bit more seriously for its director's ambition, the actors' performances and the efforts put into making this queasy film, but Dandupalyam 3 doesn't have enough moments to take home after the immediate shock value of the gore recedes (which it does all too soon these days). It is like watching one of the latest RGV exploitation flicks that use history as an excuse to show macabre killings and revel in the audiences seeking to indulge their perverse sides. Raju's film is a bit smarter and better executed than RGV's recent movies, but in Varma's defense he wasn't interesting in showing torture as much.
Share. Save. Connect.
Tweet
DANDUPALYAM 3 SNAPSHOT 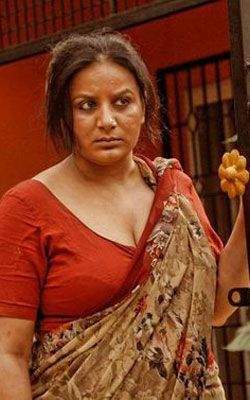 ADVERTISEMENT
This page was tagged for
dandupalyam 3 telugu full movie
Dandupalyam 3 telugu movie
Dandupalyam 3 reviews
release date
Pooja Gandhi, Ravi Shankar
Follow @fullhyderabad
Follow fullhyd.com on
About Hyderabad
The Hyderabad Community
Improve fullhyd.com
More
Our Other Local Guides
Our other sites
© Copyright 1999-2009 LRR Technologies (Hyderabad), Pvt Ltd. All rights reserved. fullhyd, fullhyderabad, Welcome To The Neighbourhood are trademarks of LRR Technologies (Hyderabad) Pvt Ltd. The textual, graphic, audio and audiovisual material in this site is protected by copyright law. You may not copy, distribute, or use this material except as necessary for your personal, non-commercial use. Any trademarks are the properties of their respective owners. More on Hyderabad, India. Jobs in Hyderabad.