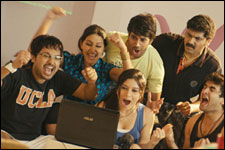 Deepa Garimella / fullhyd.com
EDITOR RATING
4.0
Performances
Script
Music/Soundtrack
Visuals
7.0
4.0
7.0
7.0
Suggestions
Can watch again
No
Good for kids
No
Good for dates
Yes
Wait for OTT
Yes
Mark Zuckerberg, we hope you're listening. In Friendsbook, a bunch of friends decide to develop an application that could help Facebook authenticate its users through voice recognition software. Apparently, the nobler aim of this project is to help Facebook weed out "fake users" (the kind that pretend to be members of the opposite sex and lure people into seedy online love affairs).

These friends are hoping to make an obscene sum of money through their "hard work", which involves a real-estate friend funding their Acer laptops, on which they work for perhaps a few weeks. Of course, the fact that the film, containing this illusory entrepreneurial dream, was released in the same week that Facebook bought a 13-employee app-developer for a whopping billion dollars, is a coincidence.

Friendsbook is actually a well-presented movie, but badly-written. It's a thriller, and it's related to technology and Silicon Valley - and that's not the best of combinations that inexperienced hands can handle.

Revealing any more of the plot than what we said in the first paragraph would do injustice to the film, so let's just make do with the fact that Suresh plays a senior Facebook executive (it's hard to watch him being introduced as some "head" in Facebook without being amused), and Rao Ramesh plays a police officer who must investigate some strange deaths happening all over.

No, this is not a preachy commentary on present-day use of social networking sites. This thriller has quite a bit of suspense, and some decent twists. R P Patnaik, who's clearly savvy with Facebook, starts the film with an engaging voice-over about Facebook and its significance. He can put together a story well, although he should have left the writing to someone else.

The problem with the writing is that it gets ridiculous in some parts. Some of the tech they come up with is quite baffling. Foremost, how can you get a new Facebook user to register his voice in different intonations - at sign-up, no less? This is a fancy world that these techies are living in, despite throwing about a decent amount of jargon like "Arey ee program execute avatledu ra".

The thing is that if you're expecting the urban crowd to take this seriously, you must at least create enough drama to shield all these inadequacies. With a supernatural element being introduced in the story, in some parts you don't even believe what is being played out on screen. There is also a problem of some red herrings thrown in - what exactly happens with Nischal and his secret conversations with his boss?

The cast is actually very good. Surya plays the techie brain behind the idea, and an actor called Suresh plays the real estate friend, and these 2 show quite a bit of talent. Nischal and Uday, and the 2 girls, all do a good job. The senior Suresh, meanwhile, seems to be carving out a niche of his own in movies like this - here's hoping we see him in some big projects soon. Rao Ramesh is the usual.

Patnaik's music is youthful and melodious. The cinematography was done by someone who clearly enjoyed his work, since this is a stylishly made film.

In all, this is a rather decent attempt, but heavily flawed. Watch it if you care enough to be non-judgemental.
Share. Save. Connect.
Tweet
FRIENDS BOOK SNAPSHOT 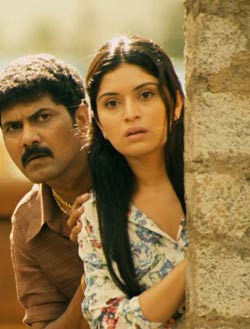 ADVERTISEMENT
This page was tagged for
friends book telugu full movie
hyderabad friends talagu
Friends Book telugu movie
Friends Book reviews
release date
Follow @fullhyderabad
Follow fullhyd.com on
About Hyderabad
The Hyderabad Community
Improve fullhyd.com
More
Our Other Local Guides
Our other sites
© Copyright 1999-2009 LRR Technologies (Hyderabad), Pvt Ltd. All rights reserved. fullhyd, fullhyderabad, Welcome To The Neighbourhood are trademarks of LRR Technologies (Hyderabad) Pvt Ltd. The textual, graphic, audio and audiovisual material in this site is protected by copyright law. You may not copy, distribute, or use this material except as necessary for your personal, non-commercial use. Any trademarks are the properties of their respective owners. More on Hyderabad, India. Jobs in Hyderabad.