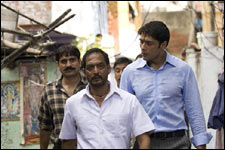 Shagird should have left it at that. Instead, what you have is a weird splattering of ostensibly intriguing twists, all set up to make you connect the dots. The dots never connect, and all you're left with is a rather big "Huh?" at the end of it all.

Shagird deals with a chor-police story set in the Delhi police's crime branch, which is led by a man whose name you don't even get for a while since you're first trying to get used to all the deja vu thanks to what is yet another Nana Patekar cop character.

Anyway, Hanumanth Singh, as he is called, is a bizarre mixture of tough, ruthless and corrupt. And of course, brilliantly sarcastic, and everything else that Nana Patekar, the actor, brings to the table. Joining the force is stony-faced chocolate boy Mohit (Mohit Ahlawat), a fresher who is appalled at the amount of corruption and fraud in the department but can't do anything other than meekly disagree with his seniors.

Hanumanth is hand in glove with a crooked MP Rajmani Singh (Zakir Hussain), as well as with a powerful gangster Bunty Bhaiyya (nicely played by Anurag Kashyap, who makes this the singularly most fun face in the flick). Now as it turns out, everyone is in cahoots with everyone else.

Why the plot moves in the direction that it does is puzzling. Hanumanth Singh's character is confusing, and even before you're done figuring out what he is all about, there are random encounters and shootings. In the meantime, an aggressive news reporter (Rimi Sen) and a terrorist kidnap are used to flesh out the proceedings. The kidnap episode, by the way, has absolutely no reason to exist in the first place.

In the end, there is a chase, and a few revelations, and then some more revelations. The movie doesn't even close in on a logical conclusion. Unaware of how little sense it is making, the film goes on and on behaving like a gangster movie that suddenly decided to go arty.

The movie isn't even great to watch; the visuals are pretty commonplace, and the background music makes this feel like a TV serial made a decade ago.

Oh well, Nana Patekar, Anurag Kashyap and Zakir Hussain ought to be the only reasons this movie has a semblance of a personality. Mohit Ahlawat is stunningly immobile in the facial department. Initially his wooden expressions go with the character he's playing, but you later realize that that is what he's only capable of. Rimi Sen bursts at the seams with all the zest she can muster up. The supporting cast is a talented bunch.

You'd pay for a ticket to this one only if you were supremely out of options. Wait till it hits the TV channels.
Share. Save. Connect.
Tweet
SHAGIRD SNAPSHOT

ADVERTISEMENT
This page was tagged for
Shagird hindi movie
Shagird reviews
release date
Nana Patekar, Zakir Hussain
theatres list
Follow @fullhyderabad
Follow fullhyd.com on
About Hyderabad
The Hyderabad Community
Improve fullhyd.com
More
Our Other Local Guides
Our other sites
© Copyright 1999-2009 LRR Technologies (Hyderabad), Pvt Ltd. All rights reserved. fullhyd, fullhyderabad, Welcome To The Neighbourhood are trademarks of LRR Technologies (Hyderabad) Pvt Ltd. The textual, graphic, audio and audiovisual material in this site is protected by copyright law. You may not copy, distribute, or use this material except as necessary for your personal, non-commercial use. Any trademarks are the properties of their respective owners. More on Hyderabad, India. Jobs in Hyderabad.