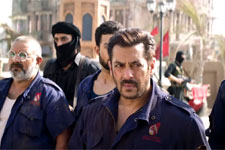 T J Reddy / fullhyd.com
EDITOR RATING
5.5
Performances
Script
Music/Soundtrack
Visuals
6.0
4.0
7.0
8.0
Suggestions
Can watch again
No
Good for kids
No
Good for dates
Yes
Wait for OTT
No
Three things happen when Tiger Zinda Hai makes its way into your eye-sockets. During those initial stages where the film sets up the narrative dominos: One, we find terrorists that speak English to their own countrymen instead of their native language. Two, we find Tiger (Salman Khan aka Bhai) fight a pack of wild wolves (bad optics right there). And three, Girish Karnad's Shenoy says "Tiger Zinda Hai" in that measured tone only he can muster. The filmmakers clearly do not want you forgetting the name and nature of the movie you walked into - nor do the set of howling lads seated in the front, the back and all other rows of the theatre.

While Tiger is busy fighting wolves and celebrating anniversaries with his wife Zoya (Katrina Kaif) somewhere in the Alps, 40 nurses are being held hostage in a hospital located at Ikrit. The Indian government cares about this incident because 25 of those 40 nurses are Hindustani (a word you will hear endlessly). As Shenoy and the External Affairs Ministry begin their plans to extract the hostages from their predicament, the CIA sounds off that it plans to carpet bomb the city of Ikrit. After listening to Shenoy's fervent pleas, however, the CIA decides to first give him 7 days to get the hostages out.

Shenoy knows there is only one man for the job. And Tiger leaves his impossibly beautiful home and family behind and travels to Syria to serve his one true love, his country.

Look, trying to identify logic in this movie is equivalent to, umm, trying to find logic in its predecessor. There are no measures of comparison when we speak of Bhai and his antics. This is a film where the primary conflict comes with a time constraint. But Shenoy chooses to fly to Langley, Virginia, then back to New Delhi and then to the Alps to finally set his mission in motion. 4 out of 7 days are out of the window right there, but the film almost cutely chooses to boldly have a "7 Days To Airstrike" graphic on-screen after all this travel.

Logic and the many theories of space-time have fallen out of that aforementioned window and we are only 30 minutes in. But we knew this going in. This is a film where a car suspended in mid-air can still turn with a move of the steering wheel, and the plan for a high-stakes rescue mission is dependent on coincidences that none of the makers of said plan knew about in advance.

The movie and the filmmakers however revel in their errors in judgement. They make fun of their characters' idiocy-fuelled patriotism. They have characters mock each other for the endless amounts of expositing. And they know that even if they had a smarter plot or cleverer writing, no one would pay attention to any of those aspects because the selling point here is Bhai and Bhai alone - the one get-out-of-jail-free card that can excuse metric tons of nonsense in a script.

Indeed, with Bhai on your side you can make the most illogical of films and still have the collective approval of the masses. It is a sight to behold when you see people both laughing at and enjoying this glorious mess of a movie. I can see the Tiger franchise stand shoulder to shoulder with the Dhoom franchise and help Yash Raj Films make money even after the apocalypse comes and wipes us all out. No apocalypse can hurt Bhai, his digitally-enhanced pecs or his one-note acting.

But that lack of nuance is what this film needs. Everyone including the filmmakers and actors themselves knows that no one is taking this seriously. Every single one of the actors knows their one-note parts to a tee. Many of them have been doing this for years now.

Bhai's job is to be Bhai. That includes keeping one expression throughout until you have to cry one single tear to remind everyone that you are still human. Katrina Kaif's lack of shade is welcome in this story as all she needs to be is a cold-blooded spy. Her excellent fight skills and comfort with physicality make her action set-piece the best one of the film. Tiger's and Zoya's respective teams do their usual bickering about India and Pakistan, and this... wait, Bhai needed a team? Why are we not talking about this?

Because time is of the essence and we have to save those sad nurses from being blown to bits damn it.

Abu Usman (newcomer Sajjad Delfrooz), the most wanted man in the world, tries to add a bit of seething menace and political commentary that isn't readily available in your 9th-grade textbook but alas all need to bow to the might of Bhai. And Usman soon goes from strategic mastermind to senseless doofus.

What this film uses to elevate these bouts of blatant fanservice are the score and cinematography. With multiple uses of slow-mo to show many a stoic face, and thumping, ear-shattering music to boot, Tiger Zinda Hai makes itself come off as an epic spy adventure even if the story holding it all together does not warrant it. The visual style, cinematography, action set-pieces, practical effects, explosions, gunfire and crimson red blood are all straight out of the top drawer. It is almost giddying to watch what a big budget blockbuster can do on a visual scale when the money is funnelled to the right departments.

But again, none of these really registers because this is Bhai's world. In Bhai's world, you don't slow down, you don't do nuanced emotions, you don't do grand finales where Bhai asks for help, and you don't do tight, taut cinema. Clocking in at over two and half hours, the movie pulls on a threadbare story until it snaps right down the middle and the vacuum between the two bits is filled with boredom and a lack of kinetic plot propulsion.

I repeat, this is Bhai's world and we are just living in it. To all of us who can find humour in the farcical nature of these films, this is a breezy weekend evening. But if you can't laugh with it or at it, you're in for a long fight with a very game Tiger that may see you end up right beside one of the wolves from the opening scene.
Share. Save. Connect.
Tweet
TIGER ZINDA HAI SNAPSHOT 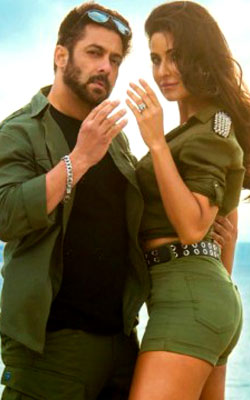 ADVERTISEMENT
This page was tagged for
tiger zinda hai movie in hindi
tiger zinda hai 2 movie in hindi
full movie tiger zinda hain
tiger zinda hai full movie
tiger zinda hai cinetones
Follow @fullhyderabad
Follow fullhyd.com on
About Hyderabad
The Hyderabad Community
Improve fullhyd.com
More
Our Other Local Guides
Our other sites
© Copyright 1999-2009 LRR Technologies (Hyderabad), Pvt Ltd. All rights reserved. fullhyd, fullhyderabad, Welcome To The Neighbourhood are trademarks of LRR Technologies (Hyderabad) Pvt Ltd. The textual, graphic, audio and audiovisual material in this site is protected by copyright law. You may not copy, distribute, or use this material except as necessary for your personal, non-commercial use. Any trademarks are the properties of their respective owners. More on Hyderabad, India. Jobs in Hyderabad.