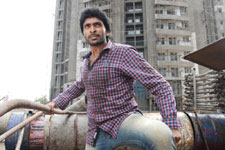 Kritika Deval / fullhyd.com
EDITOR RATING
3.0
Performances
Script
Music/Soundtrack
Visuals
6.5
2.0
6.0
4.0
Suggestions
Can watch again
No
Good for kids
No
Good for dates
No
Wait for OTT
Yes
13 years ago, the Tamil film industry gave us this piece of madness. Now, the same name graces yet another bit of civil activism that should probably have remained the figment of someone's fevered imagination that it started as. Instead, what should've vanished into the special kind of oblivion reserved for damaged ideas has turned into a full blown tale that will baffle you at every turn.

Citizen is a movie that begins with our hero Guna (Vikram Prabhu) kidnapping the law minister's son Eeshwaran (Vamsi Krishna) to facilitate the minister's arrest. Said minister is as corrupt as a pile of fetid defecation, and apparently the son is all that stands in the way of said arrest. How? Well, the only way to figure that out seems to be to develop a high fever and smoke pot.

Anyway, the kidnapping has occurred, and Eeshwaran has been relegated to a toilet in an under-construction building. Guna spends his days looking for a job as a graphic artist for an ad agency and leaving packets of food for his victim in his free time. Now, there are questions. How exactly does someone get away with visiting a building that is under construction every single day? Where are the workers? How did Guna expect Eeshwaran to actually eat anything with his hands and feet tied up and his mouth gagged?

But let's move on. Guna, on the first day of his first job, is told to think up ideas for a life insurance ad, which take the form of a caterpillar hanging off of a branch. Questions. How does Guna manage to get video footage of something we saw him take pictures of? More importantly, how does he manage to get footage of something he saw before he had a camera in his hands?

Also, he quits when the boss finds the idea lackluster, which is quite understandable on the boss' part considering the idea amounts to the video of a caterpillar crawling off a branch and hanging from a fragile thread of silk, at which Guna points and says, "this is life insurance". Then, when the boss rightfully refuses to give him his day's pay, Guna steals a bunch of fish from the office and walks out. Is it just us, or does this guy seem much more in the need of an unhappy ending than our basically honest villain?

For more, consider this. Guna first meets our heroine Malini (Surabhi) as she objects to his peeing in public, to which his reaction is to force his way into her house and use her washroom. The second time he meets her he fobs her off with the aforementioned bag of fishes. During one of his visits to Eeshwaran, he compromises her safety by reading her bank account number out loud within the hearing of a sociopath burning for revenge.

Finally, once the aforementioned minister is arrested, our hero loads the villain, still gagged and tied, into an auto, and literally drops him in the middle of a busy thoroughfare. Now, in a sane world, such an incident is bound to cause some ruckus, especially considering the proclivity among Indians to gather around the smallest mishap that occurs anywhere barely public. Here, however, Eeshwaran is obliged to contend with traffic flowing all around him as if he were invisible, with the only reaction to his wounded and dirty and immobilized form being a honk or two to get him out of the way.

All the things we have mentioned so far constitute only a minor portion of everything that is irrevocably wrong about this film. What else? The heroine falls in love with the hero over two trips to the police station and days of following him with the intention of returning the fish to him. Why she couldn't just have left them somewhere is beyond absolutely anybody. The villain decides that the only way to recognize his captor is via a D&G perfume that the hero uses, the perfume in turn belonging to the hero's sister. The heroine's sister is in cohorts with the hero's sister to wrest an "I love you" from Guna to Malini, but Guna doesn't relent until Malini bounces a ball with a conveniently available table tennis table 50 times without dropping it (we are not sure if dribbles is the right terminology, and wish for anybody who knows better to drop us a line below).

Later, when the Malini is captured by Eeshwaran in an effort to find Guna, the same person who shows a bizarre efficiency when it comes to kidnapping takes two whole days coming to the conclusion that it was Eeshwaran who took the girl. Really? A ruthless and powerful person is after your blood, and he's not the first suspect when something happens to a loved one?

That's it. We refuse to damage our fragile nerves analyzing this nightmare of an intellectual cauldron any more.

For a film this insane, the actors are all remarkably matter of fact. Vikram Prabhu has the looks and the presence to play the crusading "Citizen", but seems much too uncomfortable emoting. Perhaps we shouldn't blame him. He was probably too busy keeping himself from going into peals of hysterical laughter.

Surabhi, while not exactly a beauty, is quite adorable. Although she doesn't have much to do, she does play an amazing scarecrow. Now, what is this about a scarecrow, you ask? Well, Eeshwaran, when faced with the dilemma of what to do with the girl after capturing her, decides to bring her to the same building as the one where he was held. When forced to flee, instead of taking the girl with them, he decides to leave her tied up to the outside of one of the buildings instead of the scarecrow. Yes, there is a scarecrow. They take the stuffing out of it and stuff the girl in and leave her there. Two teams of police go through the building, not to mention Guna, without even noticing that the thing tied to the scaffolding is wriggling quite frantically. So, she is left there to the elements and to... well, crows, until she is deemed important to the plot again.

The two girls who play the sisters are having a whale of a time, and the rest of the cast delivers admirable performances, with Ganesh Venkataraman's rendition of a good cop being an oasis of sanity in this demented vortex. Vamsi Krishna gets really into his role of not quite being human. He growls and maims and kills and gives away lethal looks very comfortably, even though the villain he plays is obviously too stupid to exist.

The music is actually quite fun, and the camera work and cinematography are quite polished, despite being as chaotic as the rest of the film. Not much work was put into the locations, or the dubbing.

All in all, Citizen is only palatable when you can get away from it quite easily, or for when you need to know what the inside of a diseased mind looks like. For those who like their cinema to actually entertain, nearly any other film will do.
Share. Save. Connect.
Tweet
CITIZEN (TELUGU) SNAPSHOT 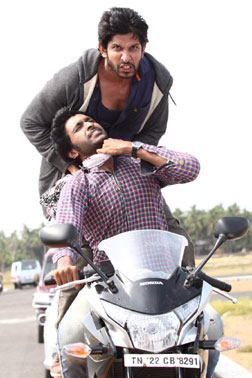 ADVERTISEMENT
This page was tagged for
citizen telugu movie review
vikram prabhu citizen telugu full movie
Citizen (Telugu) telugu movie
Citizen (Telugu) reviews
release date
Follow @fullhyderabad
Follow fullhyd.com on
About Hyderabad
The Hyderabad Community
Improve fullhyd.com
More
Our Other Local Guides
Our other sites
© Copyright 1999-2009 LRR Technologies (Hyderabad), Pvt Ltd. All rights reserved. fullhyd, fullhyderabad, Welcome To The Neighbourhood are trademarks of LRR Technologies (Hyderabad) Pvt Ltd. The textual, graphic, audio and audiovisual material in this site is protected by copyright law. You may not copy, distribute, or use this material except as necessary for your personal, non-commercial use. Any trademarks are the properties of their respective owners. More on Hyderabad, India. Jobs in Hyderabad.