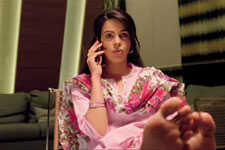 Zehra Abbas / fullhyd.com
EDITOR RATING
3.0
Performances
Script
Music/Soundtrack
Visuals
4.5
3.0
4.0
5.0
Suggestions
Can watch again
No
Good for kids
No
Good for dates
No
Wait for OTT
No
Dirty Politics takes inspiration from the real-life drama of the sensational Bhanwari Devi murder case, and uses it as a springboard to present the seamy underbelly of Indian politics. Trouble is, all of us are familiar with the basic clichés of this murky world, but apparently K C Bokadia didn't get the memo. So, with tremendous enthusiasm, this gentleman presents a torturous, two-hour long rehash of every possible cliché about our "netas", police officers, the CBI, pimps and "chamchas". It's apparent that Bokadia has done his best to produce new-age cinema, but sadly, this one qualifies as "you'll age watching this" cinema.

The story takes place in Rajasthan, and begins with powerful politician Deenanath (Om Puri) falling in lust with a dancer, Anokhi Devi (Mallika Sherawat). Assistants and pimps help Deenanath seduce Anokhi with dreams of big money and power. She doesn't require much seducing, and pouts and preens her way into a world she's ill prepared for. She also soon gets down to the business of cashing in on her closeness to a powerful politician. And by this point in the movie, the makers have done a great job of ensuring that the audience is repulsed by the one-dimensional, sordid world of its characters.

Problems arise when Dayal (Ashutosh Rana), Deenanath's close friend and ally, creates mischief between the happy couple. Anokhi is incensed by what she considers Deenanath's betrayal, and she transitions from simpering bimbette to expletive-spewing, fiery female so fast that it makes your head spin. For leverage, she secretly films herself and Deenanath doing the dirty, and begins to blackmail him. Predictably enough, Deenanath and his cohorts conspire and "take care of the problem".

The rest of the film details how a courageous activist Manoj Singh (Naseeruddin Shah) and a tough CBI officer Satyaprakash Mishra (Anupam Kher), ably supported by Thomson and Thompson, oops, Inspector Nirbhay (Atul Saxena) and Inspector Nishchay (Sushant Singh), bring the culprits to book. But since the viewers don't feel a connection with the good guys either, the film gets tedious fast.

The only thing that the makers can really take credit for is assembling a respectable cast. But you get the impression that it took them so long to get the huge ensemble in place that they forgot to write a proper script for the film. Even stalwarts like Puri, Shah and Kher cannot save Dirty Politics. Puri still manages to give a memorable performance as the wily, libidinous Deenanath, but his act is unable to rise from good to great because of the script and the poor direction.

Shah and Kher also make valiant attempts and do bring a certain gravitas at rare moments in this unintentionally funny movie, but ultimately even they can't salvage it, and you wonder why they lent their talent to such a project in the first place.

Ashutosh Rana has been missing in action for a while, and you wish he had continued his sabbatical and waited for a better film. He faithfully does his bit as the Machiavellian Dayal, but fails to infuse into his character that menacing quality that had been his hallmark in the past. Jackie Shroff doesn't even try, and does less acting and more drawling, with the result that his character, Mukhtiar Singh, remains a caricature of the don-like villain.

Another face that you see after a while is that of Atul Saxena, who impressed viewers in Rang De Basanti. Here, as one of the "desi" Thomson twins, he has his work relegated to flying off the handle without provocation during interrogations, and doing the lion's share of so-bad-it-makes-you-laugh action choreography. Just to give you an idea, there's a slow motion shot of what looks suspiciously like a jar of ghee knocking down a goon, who grimaces with the pain of a thousand blows.

Sushant Singh, of Savdhaan India fame, doesn't get much to do as Inspector Nishchay except keep his famous moustache groomed. Rajpal Yadav, another talented performer, plays Anokhi's "secretary" Bandaram, but even he can't raise his act above the requirements of the shoddy script.

Sherawat does her best to portray the wily mindset and hardened sass of a woman like Anokhi, but fails rather dramatically (some thanks also to her godawful Rajasthani "dialectious" Hindi). However, the makers must share the blame since they can't seem to decide if they want to present the character as sympathetic or power-hungry.

So, there's a hilarious bid for sympathy when they treat us to a flashback of Anokhi's impoverished past which shows a manicured and pedicured Sherawat shaping cowpats to the sound of the sarangi playing mournfully in the background. Before you finish rolling with laughter at that, they suddenly cut to a scene that shows how power has gone to her head. Here they get Sherawat in a chair and ask her to mimic Sharon Stone's famous leg crossing scene from Basic Instinct. The difference is that Sherawat does it in a dowdy Patiala salwar kameez, and with the intensity and slowness of a death row inmate tracing out an escape route with her toe. Honestly, at that point, you're laughing and cringing at the same time.

The cringing reaches its spectacular apex in the sex scenes between Puri and Sherawat. Hats off to Om Puri for doing the impossible; he steals the show from Sherawat in a sex scene. You can't tear your eyes away from the horror of seeing his potbelly in a tight baniyaan, heaving this way and that, as he paws Sherawat. She looks like she's just doing her best not to gag and swat the repulsive, old coot away. Truly, the sex scenes are so horrifying that even the most unbridled of libidos will run screaming into celibacy.

Sherawat is at her most comfortable in the "Mere Ghagre Ke Liye" item song, which serves as her introduction in the film. It's a catchy number but not catchy enough to stay in your head, and that's the quality of the music by Aadesh Srivastava in general.

The production design gives the impression of a team that worked in a hurry and took shortcuts to mimic authenticity. Mukhtiar Singh (Jackie Shroff) lives in a beautiful haveli, but just to clobber the viewers over the head with the fact that it's a Muslim home, the production guys cut out figures from those dime-a-dozen Mughal paintings and paste them on the window panes of the haveli. Really?

And that's the biggest problem with this film; it insults the intelligence of the average moviegoer repeatedly. Unidimensional characters, gaping holes in the plot and generally confused storytelling mar what could have been a good film. The complex world of Indian politics, and the stories of victims like Bhanwari Devi, require a treatment that's deft and sensitive. Dirty Politics fails on both counts.
Share. Save. Connect.
Tweet
DIRTY POLITICS SNAPSHOT 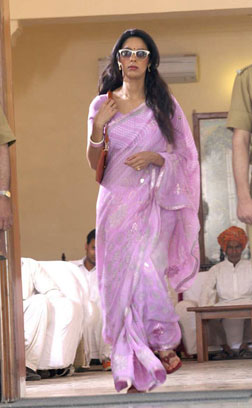 ADVERTISEMENT
This page was tagged for
Dirty Politics hindi movie
Dirty Politics reviews
release date
Mallika Sherawat, Jackie Shroff
theatres list
Follow @fullhyderabad
Follow fullhyd.com on
About Hyderabad
The Hyderabad Community
Improve fullhyd.com
More
Our Other Local Guides
Our other sites
© Copyright 1999-2009 LRR Technologies (Hyderabad), Pvt Ltd. All rights reserved. fullhyd, fullhyderabad, Welcome To The Neighbourhood are trademarks of LRR Technologies (Hyderabad) Pvt Ltd. The textual, graphic, audio and audiovisual material in this site is protected by copyright law. You may not copy, distribute, or use this material except as necessary for your personal, non-commercial use. Any trademarks are the properties of their respective owners. More on Hyderabad, India. Jobs in Hyderabad.