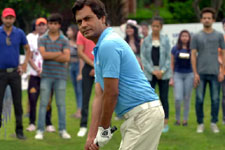 Jaiwantika Dutta-Dhupkar / fullhyd.com
EDITOR RATING
4.0
Performances
Script
Music/Soundtrack
Visuals
4.0
4.0
4.0
4.0
Suggestions
Can watch again
No
Good for kids
No
Good for dates
No
Wait for OTT
Yes
Freaky Ali is a very ambitious film. To start with, it makes sports seem easy-peasy for the whole world - and then it makes sports seem easy-peasy for the characters in the film. This is not to say that the film doesn't make a few polite noises about how Nawazuddin Siddiqui trains at golf. But it's not enough. The focus in this movie is instead on the charmed life he leads in the slums, and how it spills out uncontrollably every now and then like sewage onto the calm stretches of green.

For a film that's deliberately taking on a subject as unfamiliar as golf, and playing on the audience's ignorance, Freaky Ali had a little more story-telling, a little more explaining to do. Like, why golf, and why not darts or gilli-danda, if the entire film was to be a succession of hole-in-ones? As it progresses, you also realize that this is one movie that is taking your knowledge of golf for granted - it thinks you're a golf pro like Freaky Ali, instead of explaining how it works, the nuances.

Beyond that, though, the film implies that Ali's talent for golf is a divine gift, obviating the need to explain it. His coach-cum-caddie Kishen Lal is a mere catalyst - the real reason for his prowess is the dargah of a saint with whom Ali has a "connection". This fact is established rather early on in the narrative, and your hopes of Freaky Ali being a quality sports film are dashed to smithereens.

So Ali (Nawazuddin Siddiqui) is a passive-aggressive underwear salesman who turns an extortionist debt collector for a local goon along with Maqsood (Arbaaz Khan). His fate turns when one day Maqsood and he go to a golf course to extort. Ali confronts the man who tells him to wait while he finishes the hole. Ali claims the hole is easy, so the man asks him to show it. Ali putts the ball in just one ace for he has a gifted natural swing.

This not only surprises the man but his caddy as well who knows Ali. What follows is a story of Ali turning a golfing sensation. And as he evolves into a champion beating all odds, he also meets his dream girl Megha (Amy Jackson).

Much of the excitement the film attempts to generate is out of taking Ali and putting him on a golf course. After that, you can literally see the faulty narrative and direction trying to explain Ali's unique malaise of "swivel-wrist", which helps him on the golf course; and you try to understand what the "Old Monk" Kishen Lal (Asif Basra) saw in Ali, but you fail. Then there's Amy Jackson, who plays Manager and Maybe More to golf-champ Peter - Ali nicks her over to his side with his super-charming ghetto ways just before the interval. The repurcussions of this drastic crossover aren't dwelt upon enough in the film, either, which is too focussed on Ali's divine, dargah-bestowed talent.

Considering Freaky Ali isn't a sports film, and it does have Amy Jackson in it, it could've worked a little more on the love story. The movie has very few songs, and much effort has been invested in a typical Bollywood mind-numbing qawwali number which screams "high-light!" and makes you want to scream in frustration as well. The monotonous tirade with the underworld dons trying the fix the golf tournament may be riveting stuff for a select few, but it really doesn't work for the film. Nikitin Dheer as Danger Bhai, Arbaaz Khan as Maqsood and Jackie Shroff as Bade Bhai play interesting roles but the film wraps up in a hurry and everything seems quite pointless in the end. They get a lot of screentime, and silly, un-funny innuendoes drag the narrative when better script decisions could have been taken.

Throughout the film, Nawazuddin Siddiqui's behaviour alternates between self-effacing and ridiculous bravado. It is probably because his character is such a caricature that Freaky Ali is a film nobody will take seriously. Siddiqui, however, elevates the movie with this performance, even if he is perhaps over-hyped as an actor. He needs to brush his teeth better, though. The performances are in general disappointing.

Technically the film is below average. The direction is below par, and the film struggles to make a point clearly. Freaky Ali is essentially a badly-written film - golf isn't cricket or boxing to begin with, and despite the director having three hours, he cannot get you connected with the sport. The music is terrible, and except for one overplayed instrumental soundtrack, everything is cruel on the ears, the three songs included. The cinematography and editing both add nothing to the movie.

Freaky Ali literally bubbles with excitement when it comes to portraying the slum and the underworld don scenes. There are quite a few of them, which tells you what a sports film and a half this one is. In any case, the real fun for the makers appears to have been showing the slum kids playing golf with used styrofoam cups, showing the vibrant and synced arty-qawwali organised for Ali, showing the street kids dancing to the kettle-drum in the by-lanes as well as on the golf course with equal finesse, and showing Ali tearing off his cast and making angry faces at Manager Amy a day before the tournie - these are the real things you ought to watch Freaky Ali for. Everything else - the golf, the Siddiqui - is secondary.
Share. Save. Connect.
Tweet
FREAKY ALI SNAPSHOT 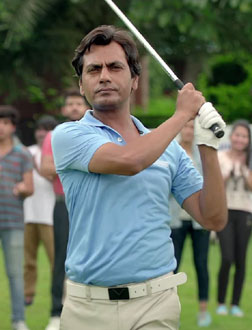 ADVERTISEMENT
This page was tagged for
Freaky Ali hindi movie
Freaky Ali reviews
release date
Nawazuddin Siddiqui, Amy Jackson
theatres list
Follow @fullhyderabad
Follow fullhyd.com on
About Hyderabad
The Hyderabad Community
Improve fullhyd.com
More
Our Other Local Guides
Our other sites
© Copyright 1999-2009 LRR Technologies (Hyderabad), Pvt Ltd. All rights reserved. fullhyd, fullhyderabad, Welcome To The Neighbourhood are trademarks of LRR Technologies (Hyderabad) Pvt Ltd. The textual, graphic, audio and audiovisual material in this site is protected by copyright law. You may not copy, distribute, or use this material except as necessary for your personal, non-commercial use. Any trademarks are the properties of their respective owners. More on Hyderabad, India. Jobs in Hyderabad.