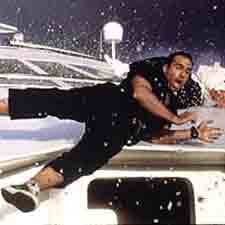 Arpan Panicker / fullhyd.com
EDITOR RATING
5.0
Performances
Script
Music/Soundtrack
Visuals
NA
NA
NA
NA
Suggestions
Can watch again
NA
Good for kids
NA
Good for dates
NA
Wait for OTT
NA
The sequel to the unlikely hit Speed, this movie is as damp as all the characters in it are. Keanu Reeves is missing in this one, and so are a lot of other factors that went into making Speed the hit that it was. Sandra Bullock is the only common factor, but she seems to have taken this movie up more as an obligation than as a proper work commitment. The hero, Jason Patric, like so many other small time Hollywood action heroes, is a carpenter's delight. His smile, which is the only expression that mars his face throughout the movie, looks as if he is showing his dentist the number of cavities he has.

The movie starts off with a high-speed chase, which is canned in a shaky and amateurish manner, and which reminds you of the technical brilliance of the chase scenes in the recent blockbuster MI-2. The original Speed had better stunts than the sequel has. Also, there is no sense of danger, and you feel as if whatever is going on on-screen has got nothing to do with you. The movie meanders around, and for a thriller that is a sequel to Speed, that is unforgivable. The last few minutes of reel try to compensate, but sorry Mr. De Bont, this time the rush hour peters out into a real drag.

Sandra Bullock as Annie (yep, the very same character) is cute, and her mannerisms are rather lovable, i.e. if they do not get on your nerves. The first couple of reels establish that this movie is indeed a sequel, with clear references to "Jack" being Annie's ex-boyfriend. Now Annie has found Alex, who she thinks is a regular cop, but he too turns out to be a SWAT member.

They take a Caribbean cruise to take the pressure of Alex's job off their relationship. But hey, a SWAT guy with his girl on a ship... the situation seems to be begging for trouble. And trouble is what they get, in the form of a computer genius, John Geiger (Willem Dafoe as a totally uninspired psycho). This nutcase takes over the ship's controls and rigs up a course that will send the ship crashing into an oil tanker. Sounds exciting? It's not!

The movie goes wrong in all the places where the original went right. The plot was obviously written for Reeves, and Jason Patric finds it just a little too baggy and loose for himself. The music is uninspiring considering that that it's the same guy who set the tune for Speed. Small things like Annie failing her driving test and the reappearance of the guy in the jaguar (remember Reeves commandeering his car to get into the bus?), this time in a powerboat, fail to give the movie that special feel.

The director should be reminded that making a sequel is not just about replicating some of the characters... it's about maintaining the feel and the quality of the original movie. And if the guys in town are desperate to re-release some movies, please release the original rush hour... this cruise is way out of control!
Share. Save. Connect.
Tweet
SPEED 2 SNAPSHOT

ADVERTISEMENT
This page was tagged for
Speed 2 english movie
Speed 2 reviews
release date
Jason Patric, Sandra Bullock
theatres list
Follow @fullhyderabad
Follow fullhyd.com on
About Hyderabad
The Hyderabad Community
Improve fullhyd.com
More
Our Other Local Guides
Our other sites
© Copyright 1999-2009 LRR Technologies (Hyderabad), Pvt Ltd. All rights reserved. fullhyd, fullhyderabad, Welcome To The Neighbourhood are trademarks of LRR Technologies (Hyderabad) Pvt Ltd. The textual, graphic, audio and audiovisual material in this site is protected by copyright law. You may not copy, distribute, or use this material except as necessary for your personal, non-commercial use. Any trademarks are the properties of their respective owners. More on Hyderabad, India. Jobs in Hyderabad.