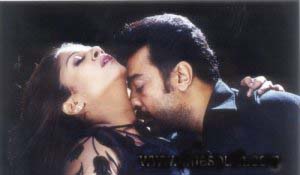 EDITOR RATING
6.0
Performances
Script
Music/Soundtrack
Visuals
NA
NA
NA
NA
Suggestions
Can watch again
NA
Good for kids
NA
Good for dates
NA
Wait for OTT
NA
Kamal Hassan is back to what he is good at: comedy. It is not just the regular kind of comedy dished out by the Telugu filmmakers, but the silly, Chaplinesque kind of humour albeit supported by the rattling oral speech that Tamilians are adept at.

It is a simple story, if at all there is a story in the first place. Two psychiatrists - the old Delhi Ganesh and his not-so-younger junior, Jayaram (who is now an independent practitioner) are at loggerheads over who is the best psychiatrist in town. Jayaram manages to wrest the ground from under the feet of Delhi Ganesh, and so the latter wants to prove that he is better than Jayaram in every way. He does this by sending the crankiest of all his patients, Tenali, to him for treatment. Delhi Ganesh's idea is that the latter will ruin the image of Jayaram, and so he, Delhi Ganesh, will become the number one psychiatrist once again.

Talking of Tenali, he is a coward to the point of pointlessness. He is scared of anything and everything, and his scary acts land many people in sometimes humorous and sometimes embarrassing situations. The coward enters the house of Jayaram, and, as expected, creates hellish moments for him. Right from the first contact Jayaram tries to get rid of Tenali, but Tenali surfaces again and again, even when the doctor is vacationing in Kodaikanal.

As you can expect, Jayaram's family becomes fond of Tenali and tries to thwart the efforts of Jayaram in getting rid of him. Jayaram's sister goes a step further and falls in love with Tenali. And all that rigmorale till the end.

Tenali starts off well and you are treated to dollops and dollops of humour with Kamal Haasan rediscovering his innate comic genius. The film progresses well till the interval as you are served with as much comedy as possible. But the director foolishly tries to continue the film in the same vein without having any plot. By the time you come to the end you realise that there is no plot worth the name. Even Kamal Haasan surprisingly sheds his mad guy image all of a sudden and starts behaving normal. So much for continuity.

The Malayalam actor Jayaram is good as the doctor, while Delhi Ganesh too tries his best to keep up the comedy unleashed by the director. Jyotika doesn't have much to do except singing a couple of songs with Kamal Haasan. Devayani plays an insignificant role as Jayaram's wife. It is not a bad film, for it has some good comedy, but it is not a good film either, as it does not live up to the expectations built in the first half.
Share. Save. Connect.
Tweet
TENALI SNAPSHOT

ADVERTISEMENT
This page was tagged for
tenali telugu moovie
Tenali telugu movie
Tenali reviews
release date
Kamal Haasan, Jyotika
Follow @fullhyderabad
Follow fullhyd.com on
About Hyderabad
The Hyderabad Community
Improve fullhyd.com
More
Our Other Local Guides
Our other sites
© Copyright 1999-2009 LRR Technologies (Hyderabad), Pvt Ltd. All rights reserved. fullhyd, fullhyderabad, Welcome To The Neighbourhood are trademarks of LRR Technologies (Hyderabad) Pvt Ltd. The textual, graphic, audio and audiovisual material in this site is protected by copyright law. You may not copy, distribute, or use this material except as necessary for your personal, non-commercial use. Any trademarks are the properties of their respective owners. More on Hyderabad, India. Jobs in Hyderabad.