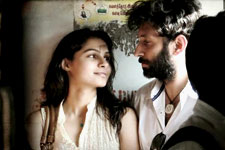 Neema Pramod / fullhyd.com
EDITOR RATING
5.5
Performances
Script
Music/Soundtrack
Visuals
8.0
5.5
5.5
7.0
Suggestions
Can watch again
No
Good for kids
No
Good for dates
Yes
Wait for OTT
No
Stephen Hawking had once remarked that the biggest mystery for him, one that he could never solve, were women. Our cinema seems to support his statement. From the time films began to get made, filmmakers and their heroes have been trying to unravel the mystery that is the woman. "When a woman says No, does she not mean Yes?" "When a woman rebuffs your advances, is she not playing hard-to-get?"

And if she is a "modern" woman (definition: she who drinks, smokes, swears, and wears short clothes), she is even more of an enigma. "How does she expect not to be raped / groped / eve-teased if she does all that?" How puzzling!

Taramani (dubbed from Tamil) is director Ram's attempt to decode the "mysterious modern woman". Though he is not wholly successful in his attempt, his portrayal of the two protagonists provides a lot of food for thought.

Ram's version of this "modern woman" is Athiya (Andrea Jeremiah), an Anglo-Indian software engineer who ticks all the boxes in Indian cinema's list of requirements for a "modern woman". To top it all, she is a divorcee with a son. Gasp!

Her boyfriend is Prabhu (Vasanth Ravi), who is your typical (educated) loafer. At first he seems like a mature, understanding man. He does not probe into the reasons behind Athiya's single-parent status, takes it in his stride when she finally opens up to him, and enjoys spending time with her son. Therefore, it comes as no surprise that Athiya falls in love with him despite the fact that they are poles apart.

But a few months into their relationship, cracks begin to appear. Prabhu's inherent conservatism and misogyny begins to make its presence felt. He starts getting increasingly possessive of Athiya - keeping track of her Facebook friends, peeping into her phone, telling her what to wear, and getting jealous of her friendships with her male colleagues. Though initially Athiya chooses to brush past his insecurities, these emotions keep festering inside him, eventually resulting in a massive showdown between the two that puts a full stop to their relationship. What happens to Prabhu and Athiya from this point, and whether they get back together, is what Taramani is all about.

As mentioned, what Taramani gets right are its two central characters. Prabhu is a reflection of the hypocritical nature of the society. The same aspects of Athiya's personality which attracted her to him become a problem for him later. At the time, she was just a woman he was interested in. Now she is his girlfriend. He sees her as someone belonging to him, which makes it difficult for him to accept her independence.

But Athiya is not one to belong to anybody. She is unapologetically herself, refusing to change her core personality for a man even though she loves him. Yes, she does have the patience of a saint (you'll wonder if anyone else in her place would have been as forgiving), but she also knows where to draw the line. When Prabhu confronts her about the indecent proposition her boss had made to her, she replies, "It is I, and not the man, who will decide whether I sleep with him or not." That one line conveys volumes about the kind of person that is Athiya.

However, Ram seems to have expended all his energy on Athiya, for the other women in the film are just stereotypes - be it Sownya (Anjali) as Prabhu's unfaithful ex, or Athiya's hypocritical colleague, or even Athiya's mother. The only other female character that creates some amount of impact is that of the cop's wife.

The first half of Taramani, though long, sustains interest due to the way the relationship between Prabhu and Athiya is shown. But the film loses steam after Prabhu and Athiya break up, and it is all downhill from there. The second half is a drag; with a lot of unnecessary bits thrown in (these concepts might have sounded great on paper, but the execution leaves a lot to be desired).

The second half also succeeds in bringing out the filmmaker's own dormant conservatism. Prabhu goes on to do truly horrible things, and he is let off scot-free with no consequences. Athiya, however, is blamed for not being a good enough mother to her son, and is made to question her own choices. And the choice she makes at the end dilutes the entire point of the movie. It is almost like the makers came this close to understanding the mysterious modern woman, but then decided to make them an even bigger mystery. Ah, the male gaze.

But Andrea Jeremiah manages to keep you watching. This is probably the most challenging role in her career till date, and she is simply fantastic. Though the dubbing does not do her complete justice, she is still able to bring out the complexities of her character. Vasanth Ravi is quite convincing as Prabhu. Anjali is fine in her extended cameo, but the dubbing for her character is extremely grating. Adrian Knight Jesly as Athiya's son touches your heart. The rest of the cast is apt, too.

Yuvan Shankar Raja's songs might not be for everyone, but they fit well into the narrative. The background music deserves a mention, too. The cinematography by Theni Eswar is easy on the eyes.

Taramani is not a film for everyone. The film never feels like a Telugu film at any point - and the lack of commercial elements like dance numbers, duets, action sequences etc. only adds to the feeling. But for people who would like to see a different take on man-woman relationships, or the modern woman in general, Taramani would make for an interesting watch.
Share. Save. Connect.
Tweet
TARAMANI SNAPSHOT 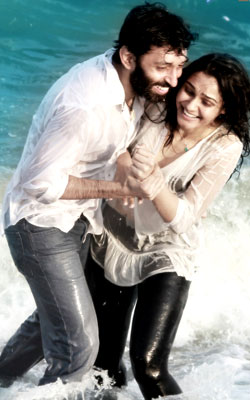 See Taramani full details
TARAMANI USER REVIEWS
1 - 2 OF 2 COMMENTS
POSITIVE  |  NEGATIVE |  NEWEST  |  OLDEST  |  MOST HELPFUL  |  LEAST HELPFUL
JayZ on 8th Sep 2019, 9:00pm | Permalink
Andrea Jeremiah is a very good actor. It's pretty unfortunate we don't get to see her in more Telugu movies.
TJ Reddy on 7th Sep 2019, 12:43pm | Permalink
Absolutely spot on with the analysis here, Neema. In simple words, I'd say this is a slightly smarter version of something like a Kumari 21F. I once heard Ram talking about his thesis for the film being Eyes Wide Shut but unlike that film, his attempt doesn't go all the way with exploring all avenues in a convincing manner.

ADVERTISEMENT
This page was tagged for
taramani movie in telugu
taramani telugu full movie
taramani full movie
taramani review by mirchi telugu
taramani telugu movie
Follow @fullhyderabad
Follow fullhyd.com on
About Hyderabad
The Hyderabad Community
Improve fullhyd.com
More
Our Other Local Guides
Our other sites
© Copyright 1999-2009 LRR Technologies (Hyderabad), Pvt Ltd. All rights reserved. fullhyd, fullhyderabad, Welcome To The Neighbourhood are trademarks of LRR Technologies (Hyderabad) Pvt Ltd. The textual, graphic, audio and audiovisual material in this site is protected by copyright law. You may not copy, distribute, or use this material except as necessary for your personal, non-commercial use. Any trademarks are the properties of their respective owners. More on Hyderabad, India. Jobs in Hyderabad.