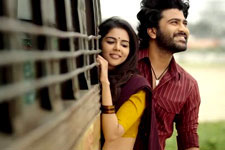 Neema Pramod / fullhyd.com
EDITOR RATING
5.5
Performances
Script
Music/Soundtrack
Visuals
4.5
3.5
5.5
8.0
Suggestions
Can watch again
No
Good for kids
No
Good for dates
No
Wait to rent it
Yes
Ranarangam opens with a quote from Fight Club: "Everything is a copy of a copy of a copy." This has to be one of the great moments of candour shown by moviemakers in Telugu cinema, for Ranarangam draws inspiration from every gangster movie ever made. But alas, that is all this movie manages to be - a bland rehash of ideas, with very little innovation.

Ranarangam chronicles the journey of Deva (Sharwanand) from a black-ticket-seller to a dreaded gangster. The movie opens in Spain, where a middle-aged Deva is leading a luxurious and (relatively) calm life with his teenage daughter. However, as it has to happen in such movies, ghosts from his murky past come back to haunt him minutes after you catch your first glimpse of the man.

You are then transported to 1995, where you see Deva and his friends selling tickets in black to make some quick money. Theirs was a relatively peaceful life which consisted of ogling at girls by day and downing a drink or two by night - until NTR imposed alcohol prohibition in the state. Deva and his gang decide to use this situation to their advantage by illegally smuggling alcohol into the state and setting up a business. As expected, Deva's entry into the smuggling business is met with its fair share of opposition from bigwigs who see him as a trespasser in their area. The rest of the movie is all about how Deva powers through them all and becomes a powerful don who instills fear in the hearts of many.

In the middle of all this smuggling and killing, Deva also finds time for not one but two romantic tracks. The first one, with Geetha (Kalyani Priyadarshan), is clichéd but not without charm. Though Geetha is no different from the cute but feisty village belles you usually see in such movies, what is actually refreshing is the way in which her father reacts to her liaison with Deva (delightfully free of melodrama). The second love track, with Geetha (Kajal Aggarwal) - and yes, she is also named Geetha for some unknown reason - is barely there, and should have been scraped off altogether.

Visually and technically, Ranarangam is a delight. The movie is so stylishly shot that it keeps you watching even when the proceedings on screen get increasingly dull. Spain looks gorgeous through Divakar Mani's lens, and the '90s era has been recreated with care, too. The action sequences are well-shot, with a lot of blood and gore on display (Ranarangam is injurious to those with weak stomachs). Prashant Pillai's songs are just about okay (and not at all in line with the period they are set in), but the thunderous background score plays a huge role in elevating even the most generic scenes.

Unfortunately, all this technical posturing does not do much to help Ranarangam rise above its lazy script. Once the beautiful packaging comes off, the film has nothing new to offer. The problem is not that the story is as old as the hills - there is only so much novelty one can bring to a movie of this genre - but that the director has made no effort to at least tell it in a different way. Each and every plot point is predictable - down to the mandatory pre-climatic twist. Deva's journey is supposed to make you whoop with joy, restless with anticipation, and clap in appreciation, but all that you end up feeling is a sense of satisfaction that you managed to predict what the next scene was going to be.

Indeed, style can only take you so far. To fully enjoy movies like this, it is important that you form emotional connects with the characters. You should admire the hero and want him to succeed. You should fear for the safely of his loved ones. You should loathe the villains with a vengeance. But here, you are always kept at a distance from the characters. You see what they go through, but you don't feel it. The body count keeps rising throughout the movie, yet all you care about is how many more are left before you can go home. You know something is horribly wrong when a character close to the hero dies and people are hooting and laughing in the audience.

It doesn't help that Sharwanand's performance is similar to the movie - emotionally distant. He goes through the motions perfectly well, but does not take you into the soul of the character. He just does not have the charisma to pull off a character like this one - his persona is better suited for softer movies like Journey and Malli Malli Idi Rani Roju. The villains are played by experienced actors like Ajay and Murli Sharma, among others, but their characters are so underwritten that the actors are forced to sleepwalk through them.

The heroines, too, don't do much to make you care for them. Kalyani Priyadarshan has the bigger role, and hers is an endearing presence, but she has a long way to go in terms of acting. Kajal Aggarwal is pretty, but looks as though she doesn't know what she is doing in this movie (neither do we, in fact). The actors who play Deva's friends (Aadarsh Balakrishna, Raja and others) are passable.

With Ranarangam, Sudheer Varma had everything at his disposal - a strong technical crew, a good budget and actors who have proven their mettle in other movies - but splendidly wastes them. The film could have been so much more, but all it ends up being is the same old underdog story that takes its own sweet time to arrive at a conclusion the audience foresaw long ago. It is slick, yes, but also empty.
Share. Save. Connect.
Tweet
RANARANGAM (2019) SNAPSHOT 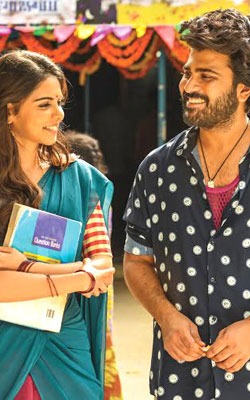 ADVERTISEMENT
This page was tagged for
Ranarangam heroine stomach
Ranarangam (2019) telugu movie
Ranarangam (2019) reviews
release date
Sharwanand, Kajal Aggarwal
Follow @fullhyderabad
Follow fullhyd.com on
About Hyderabad
The Hyderabad Community
Improve fullhyd.com
More
Our Other Local Guides
Our other sites
© Copyright 1999-2009 LRR Technologies (Hyderabad), Pvt Ltd. All rights reserved. fullhyd, fullhyderabad, Welcome To The Neighbourhood are trademarks of LRR Technologies (Hyderabad) Pvt Ltd. The textual, graphic, audio and audiovisual material in this site is protected by copyright law. You may not copy, distribute, or use this material except as necessary for your personal, non-commercial use. Any trademarks are the properties of their respective owners. More on Hyderabad, India. Jobs in Hyderabad.