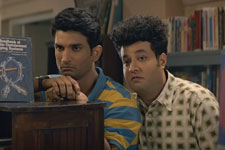 Punarvasu Pendse / fullhyd.com
EDITOR RATING
5.0
Performances
Script
Music/Soundtrack
Visuals
6.0
5.0
4.0
6.0
Suggestions
Can watch again
No
Good for kids
No
Good for dates
Yes
Wait to rent it
Yes
To be brutally honest, Chhichhore ends up feeling like a long series of hangovers. We are not throwing shade at the movie here, honestly, because the result still has its own charm.

Hangover 1: Director Nitesh Tiwari's previous film seems to heavily play on his mind, which is not necessarily a bad thing. Dangal is rich in both story and spirit, and being the highest grossing Bollywood movie of all time also helps. Unfortunately, though, Dangal was about sport at its heart, while the sporting competition in Chhichhore seems to be over-stretched.

Chhichhore is a story that runs simultaneously in the past and in the present, as Anni (Sushant Singh Rajput) and Maya (Shraddha Kapoor), a divorced couple, relive their college memories with their hospitalised son who has just survived a suicide attempt. Joining in are the "Losers" - college friends of the duo who happen to be their family at the boys hostel H4 - Sexa (Varun Sharma), Acid (Navin Polishetty), Mummy (Tushar Pandey), Bevda (Saharsh Kumar Shukla) and Derek (Tahir Raj Bhasin).

Hangover 2: 3 Idiots - Chhichhore perennially seems to be trying to recapture the spirit of this much-loved college caper, although, unlike the former film, it never quite does manage to land. Every plot point feels like a slightly inferior version of the former - be it the past/present axis, the chaos that is hostel life, or the social message that runs parallel to the film's comedy.

Does almost every 40-something present avatar of the "Losers" need to have a receding hairline? The prosthetics feel very tacked on, on almost every single character, save Maya. In her case, she just seems to have traded her Western outfits for a desi attire, while her general look remains the same.

To be fair to Chhichhore, its depiction of college life is fun and engaging, but it avoids serious situations, unlike the attempted suicide and suicide which hit the audience hard in the middle of an otherwise funny film. The humour is where it trades blows with 3 Idiots - the one-liners keep coming, and the general aesthetic of capturing raunch in an otherwise sanitised atmosphere works charmingly well.

The social message is where the film decides to completely overdo it, which ends up feeling jarring. Other movies in the past have subtly or not so subtly tried to say that it's not winning that matters but the effort you put in, but Chhichhore turns it up to 11 through a sports competition that seems to drag on quite a bit.

It is this sports hangover that we picked up before, that leads into the next one.

Hangover 3: THE film that comes to mind when one hears "college movie" - it comes as a surprise to no one that modern-day films will try to recapture the magic that has stayed alive despite coming out over twenty-five years ago.

While Chhichhore does not reach the same heights as Jo Jeeta Wohi Sikandar, the former movie does a pretty decent job of showcasing a sports competition which has you rooting for the underdogs. Our only issue, again, is the amount of screen time it gets.

It is the supporting cast who carry the film, especially their college avatars. Varun Sharma easily steals the limelight, and does justice to the plenty of witty dialogues thrown his way. Tahir Raj Bhasin and Prateik Babbar do an okay job of being rival super-seniors, but it's Naveen Polishetty's Acid who gets the loud and brash act just right.

Tushar Pandey is hilarious in bits, especially when his character does something uncharacteristic. Saharsh Kumar Shukla is not featured as much as the other losers, but he does what he can with the script.

Pritam's music doesn't set the house on fire, figuratively speaking, but it doesn't seem overbearing either. "Fikar Not" is the one song that we guess will stick in people's minds.

Chhichhore is an enjoyable film in bits and pieces, and could have worked better if it was shorter in length. It is not very original, both in terms of the setting and the story, but then which college film truly is? At least we are not getting into the Student of the Year 2 category.
Share. Save. Connect.
Tweet
CHHICHHORE SNAPSHOT 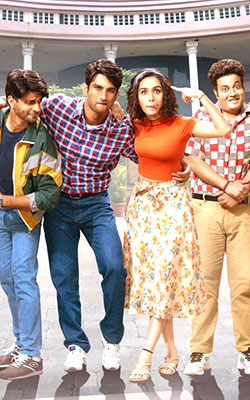 ADVERTISEMENT
This page was tagged for
chhichhore management points seen in movie
chhachhori hindi movie review
Chhichhore hindi movie
Chhichhore reviews
release date
Follow @fullhyderabad
Follow fullhyd.com on
About Hyderabad
The Hyderabad Community
Improve fullhyd.com
More
Our Other Local Guides
Our other sites
© Copyright 1999-2009 LRR Technologies (Hyderabad), Pvt Ltd. All rights reserved. fullhyd, fullhyderabad, Welcome To The Neighbourhood are trademarks of LRR Technologies (Hyderabad) Pvt Ltd. The textual, graphic, audio and audiovisual material in this site is protected by copyright law. You may not copy, distribute, or use this material except as necessary for your personal, non-commercial use. Any trademarks are the properties of their respective owners. More on Hyderabad, India. Jobs in Hyderabad.