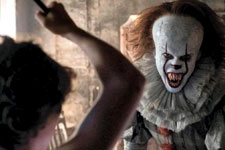 T J Reddy / fullhyd.com
EDITOR RATING
6.0
Performances
Script
Music/Soundtrack
Visuals
7.0
5.0
6.0
7.0
Suggestions
Can watch again
No
Good for kids
No
Good for dates
Yes
Wait to rent it
No
So, where were we?

It was 1989. There was a band of lovable kids who referred to themselves as The Losers Club. They had just defeated the blood-thirsty, child-murdering, shapeshifting, not-so-funny clown, Pennywise. They did this by working as a collective while simultaneously facing their fears. A sun-soaked heart-to-heart later, the crew of friends swore a blood oath to return to the quaint town of Derry if IT ever chose to rear its painted head again.

It is 2019, and IT is summoning them back home by going back to its evil ways.

While Pennywise (Bill Skarsgard) chooses to hang on to his iconic clown self, the losers have seemingly grown over the years. Bill Denbrough (James McAvoy) is a successful novelist whose endings aren't as good as the stories leading up to them aka the Stephen King stand-in. Ben Hanscome (Jay Ryan) is a successful businessman who now has a fat bank account and a lean body. Richie Tozier (Bill Hader) is a successful comedian who is physically incapable of going a few minutes without making an inappropriate joke.

Eddie Kaspbrak (James Ransone) chose to put his hypochondriac nature to good use by turning himself into a successful risk assessor. Stanley Uris (Andy Bean) keeps his anxious character under control by solving elaborate puzzles. He affords those puzzles by being a successful partner in an accounting film.

Mike Hanlon (Isaiah Mustafa) chooses to remain in Derry, makes the attic of a library his home, and successfully compiles an extensive historical document about Pennywise. And finally, Beverly Marsh (Jessica Chastain) is in an unsuccessful marriage she wants dissolved.

While their bodies and bank accounts have grown, their fears remain the same. The movie structures itself in a way that helps reconnect its audiences to the main characters. Bill still blames himself for his little brother's death. He buys his old bicycle from a quite on-the-nose cameo. Bill rides his old bike to his old street. He reexperiences his fears courtesy of a Pennywise scare, and goes back to meet his friends.

Ben is still a heavy and lonely child on the inside. He goes back to school - the place where he felt the most isolated. He reexperiences his fears courtesy of a Pennywise scare, and goes back to meet his friends.

Eddie is still afraid of everything around him. A fear instilled into him by his overbearing mother. Eddie visits the local pharmacy - the place that hyper-exaggerated his fears. He reexperiences the worst memories of his childhood courtesy of a Pennywise scare, and subsequently goes back to meet his friends.

Beverly lets the abusive men in her life control her. She visits her old home which the first man who controlled her life, her father, called his abode. She reexperiences her fear.

I see what's going on here. I'm not dumb enough to be fooled four times.

The majority of the lovable losers have little to no character development. Their fears have neither morphed to take new forms nor have they evolved to envelop larger sections of their lives. Except for Richie, who gets a new wrinkle to his character, the band of adults are more or less similar to who they were as kids. The actors playing the adults deliver powerful performances with the limited resources afforded to them. However, they are no match for the genuine warmth and camaraderie their younger counterparts brought to the screen in chapter 1.

This phenomenon of the new not matching the old is doubly emphasized when the film veers into some fresh cinematic territory for its finale. While the scares leading up to the end are all extremely well-constructed and executed, the finish itself is palpably long and unmistakably deflating. Anyone that has spent time summiting the over 1,000-page source material can attest to the fact that the book wraps itself up in a downright comical note. The film tries to make its way past this by incorporating new elements to the preset finale. The ideas presented in this segment, while intriguing, are botched by some diabolical production design, set design, staging, pacing and art direction.

It: Chapter 2 boasts of smooth camerawork, perfect production design, arresting make-up and more throughout its runtime. Everything including the darker shade of colour offered to the grass and trees, which in turn makes the red balloons pop out more, is an inspired choice. But all of this is undone by the amateurish storytelling and filmmaking that concludes this duology.

In addition to this, Benjamin Wallfisch's score for the movie's more triumphant moments isn't as good his compositions for the film's nightmare-fuel. This misstep may leave an audience stepping out of the cinema more iffy than excited.

I caught myself reminiscing about a little trip I took while watching this movie. A few years ago, I visited my old school before it was torn down to build a bigger, better school in its place. The old homely building held a special place in my heart. Let me reassure you it wasn't because I had great memories associated with it.

As I walked into the atrium, I realized that it was much smaller than I remembered it being. The classrooms felt a lot more confined. The playground was nothing compared to the park across the street, and I could cover the length of the school on foot in under 2 minutes. But when I was a kid, this place felt massive and full of possibilities.

The first part of IT chose the perspective of a group of children to narrate its story. Their irrational fears seemed logical because of the inexperience of youth and a lack of adult supervision. Chapter 2 would have you believe that that human emotions stop evolving (for better or for worse) at school.

Muhammad Ali once said that a man who viewed the world at 50 the same way he did at 20 had wasted 30 years of his life. In the grand scheme of things, The Losers Club seem to have lost 30 years of their lives. Their imperfections and their interactions with their fears may make for some fun horror fodder, but the IT franchise is one of those kids that peaked at high school.
Share. Save. Connect.
Tweet
IT: CHAPTER TWO (HINDI) SNAPSHOT 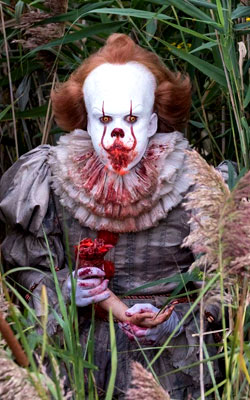