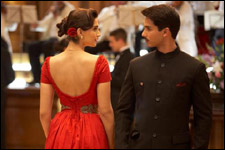 Samrat Sharma / fullhyd.com
EDITOR RATING
6.5
Performances
Script
Music/Soundtrack
Visuals
6.5
4.5
7.0
9.0
Suggestions
Can watch again
No
Good for kids
No
Good for dates
Yes
Wait to rent it
Yes
The star of Mausam is Binod Pradhan - no two questions about it. This oft-lauded cinematographer is at the top of his game as he takes control of the film from the first frame and relentlessly pursues that perfect frame, every scene, every locale, every moment.

First-time director Pankaj Kapur couldn't have done better when he wanted to bring his vision to life - this is a gorgeous film, often even breath-taking. And much like its pretty-faced stars show, a little beauty goes a long way towards assuaging the missteps that make the movie.

In creating a film that spans more than a decade, Pankaj Kapur has created a modern epic that travels across the world, as also the turbulent milestones in our nation's modern history. Religion and its repercussions have always made for a standard backdrop for love stories in Bollywood, but Pankaj Kapur has the alacrity to try and ground it with real events and how they affect normal people.

Pity then, that he chose to shoot the film with what appears to be a very early version of the script. Setting it in a particular time has its repercussions - people tend to question the lack of use of modern staples to resolve what are basic, fundamental obstacles that belie the real, big ones.

Starting from a small village in Punjab where Harry (Shahid Kapoor) meets newly-moved-from-Kashmir-at-the-onset-of-violence Aayat (Sonam Kapoor). Moving on to Scotland, Switzerland, and back to India (I may have left a few places out, perhaps), the star-crossed lovers are always within whispering distance of each other, and yet keep getting separated without so much as a goodbye.

The coincidences pile up, and in a 3-hour long movie, it really grates. After a breezy and light first half, as the troubles loom in - communal clashes, terrorism, war - the film gets increasingly serious and monotone. Not that we expect Kashmir troubles, the Babri Masjid incident, or the Kargil War to be treated frivolously, but the film's refusal to be anything but po-faced is to the detriment of the 2 leads.

Shahid Kapoor is frankly amazing as the happy-go-lucky country boy in love with a girl that just moved. As the film moves on, his attempt at keeping a stern, almost angry demeanour all throughout really stops from showing off his acting chops. The script leaves no room but for weeping and pining for Sonam Kapoor, and while she is now an old hand at it, it's not exactly riveting stuff.

The script is the failing here - when only the main protagonists are tasked with carrying the film across, the tone and the pace of the film should have complemented them. However, the too-serious tone it chooses to employ worsens the impact of the emotional beats it deliciously cooks before delivering the payload.

This is not an insincere film - you can feel that in all earnestness everyone really wanted to make a timeless film about romance in a society that shuns civil discourse at the very mention of religion. While there may have been a point to all this, the script fails to communicate that to us. It feels without a goal, a journey that doesn't have an interesting destination - which is proved correct when the film completely destroys itself in the climax.

If you're at all curious about the film, by all means check it out. It's not a bad time at the movies, though certainly feels unending.
Share. Save. Connect.
Tweet
MAUSAM SNAPSHOT

ADVERTISEMENT
This page was tagged for
Mausam hindi movie
Mausam reviews
release date
Shahid Kapoor, Sonam Kapoor
theatres list
Follow @fullhyderabad
Follow fullhyd.com on
About Hyderabad
The Hyderabad Community
Improve fullhyd.com
More
Our Other Local Guides
Our other sites
© Copyright 1999-2009 LRR Technologies (Hyderabad), Pvt Ltd. All rights reserved. fullhyd, fullhyderabad, Welcome To The Neighbourhood are trademarks of LRR Technologies (Hyderabad) Pvt Ltd. The textual, graphic, audio and audiovisual material in this site is protected by copyright law. You may not copy, distribute, or use this material except as necessary for your personal, non-commercial use. Any trademarks are the properties of their respective owners. More on Hyderabad, India. Jobs in Hyderabad.