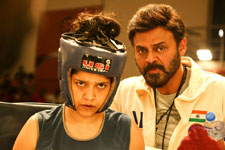 Josh / fullhyd.com
EDITOR RATING
8.0
Performances
Script
Music/Soundtrack
Visuals
8.0
6.0
7.0
8.0
Suggestions
Can watch again
Yes
Good for kids
Yes
Good for dates
No
Wait for OTT
No
I reviewed this film before. It's the same story, same director, same actress, same supporting cast, same composer and same editor as the original (Saala Khadoos). Now I sit to review the same film. You might think that's a bore, but isn't that what we are used to as Telugu film reviewers? We keep watching the same film week after week, don't we? Different faces, different technicians, different names, but the same film?

The plot is the same - about two decades back, Aditya Rao (Venkatesh) lost his boxing career to politics in the association. His wife dumps him and he never quite gets past that blow. Now, as a coach, he's ruthless, grumpy, and hungry for talent. He finds Rameshwari aka Ramudu (Ritika Singh), a poor but gutsy, and cheeky but talented girl who, he thinks, is even better than him.

While Ramudu doesn't quite grasp the gravity of the situation, Rao throws in all he has into making her an actual champ. The plot goes on in the familiar coach-protege territory which already homes a number of sports dramas.

And I'll once again tell you, and I swear I just love telling this to people, Sudha Kongara is a fabulous fabulous director. It isn't just about the superb talent she hired. Whether it is Santosh Narayanan's ethereal strings or K A Shaktivel's pastel frames or Satish Suriya's invisible seams, Kongara's command on her crew's talent is something to admire. But, beyond the craft, there's more to her direction. It is about the way she can create a tender moment which sweeps you into itself.

I can try to explain but one can only talk about a fragrance - you'll have to smell it for yourself to understand. All I can say is quite a few times tears welled up in my disbelieving eyes, and for one brief moment I hyperventilated. And this in a film I'd already watched three times (once in Hindi and twice in Tamil). Guru is, as was Saala Khadoos, a subtle and soulful exercise in direction.

That isn't to say there aren't flaws. There's the scourge of poor dubbing. I had difficulty understanding Zakir Hussain (as the antagonist Dev Khatri) and Nasser (as the junior coach Punch Pandu). Also, a number of song lyrics are pronounced so badly that you can't tell what the exact words are. Ramudu's obsession with Pawan Kalyan (it was Dhanush in the other versions, and that track worked rather beautifully there) seems a little forced here. Her mother being a Marwari and father being a converter Christian just doesn't work - you'll be wondering what that was all about. Yes, there are some rather glaring flaws.

But it's okay. We still have Ritika Singh. Here I'll tell you, once again, that she's utterly uninhibited in her performance. I'm still in awe of how she emotes like she is really feeling those things. When Ramudu is in love, you believe she is in love. When she's angry, you know she is insecure. When she's in despair, you, too, lose hope.

And oh yeah, when she does the one-handed push-ups, I had goosebumps.

That happened the last time, too. Which is why I ended my review with this: "... when a movie pro-actively shows a woman dreaming big, a woman losing all and starting from scratch, a woman falling in love and not being bashful about it - basically a woman having the qualities that are considered heroic in a man - then it is important to spell it out: Watch That Movie. Take your daughters, your nieces, your sisters and your mother to watch it. Because heaven knows they could use a role-model without a moustache."

I should have ended this review, too, that way. But I wore different lenses today - the Telugu film lenses. In that context, Guru gathers further significance than what I mentioned in the previous paragraph. Here, finally, I found a Telugu hero that I could truly admire. Venkatesh, on multiple occasions, does the unthinkable in Guru. He is possibly the first Telugu star who has shot a whole film with a greying beard. He plays a guy whose wife left him (gasp - isn't that emasculation?). He plays a guy who beds multiple women (so that means he's immoral, right? so he can't be a hero, right?). And several times in the film his students and his junior coach call him all sorts of humiliating things. He just smiles through them.

This is a kind of heroism that our films don't even think of dabbling with. We glorify lack of fear when courage really is about conquering a real fear. We believe in having the hero win every contest which, incidentally, just takes the juice out of the contest. We go to great lengths to protect our heroes from any disgrace because the hero's ego is like the heroine's virginity - the smallest blemish and all is lost.

But Aditya Rao firmly establishes a hero as a person with a purpose. He lives for his dreams, and can handle pain and ignominy. It reminds me of Rudyard Kipling's poem "If" a part of which goes:

If you can force your heart and nerve and sinew
To serve your turn long after they are gone,
And so hold on when there is nothing in you
Except the Will which says to them: "Hold on!"

Venkatesh fills his frames with not just large biceps but also with seasoned expressions and a cool dignity that is stupendously rare in our films. So yes, it is important to spell it out: watch this movie with the men in your life. Take your sons, your nephews, your brothers and your father to watch it. Because heaven knows we could use a role-model who's more than a moustache.
Share. Save. Connect.
Tweet
GURU (2017) SNAPSHOT 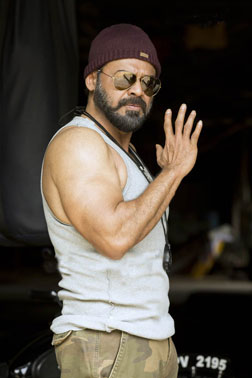 who the hell cares a movie.. got a lot real things to do... just chill. enjoy the first movie of your life.
RaghuM on 31st Mar 2017, 8:02pm | Permalink
Loved reading every word of the last 6 paragraphs.

I love your reviews more for the philosophy you induce than the movie's content.

Perhaps, you(and slowly all fullhyd reviewers) are the only review site that takes readers comments as seriously as the movie itself. And it takes tremendous courage to do that.

I eagerly await Fridays, not for the weekends, not for new movie releases, but for the sheer pleasure of reading new fullhyd reviews.

Well, I may not agree with everything you say about a movie, an artist or a performance. But, I go through the same pain when a Telugu (language/culture of my love) movie is pathetic and I jump as high when a movie is well made.

Please continue not to shy away from being bold and unbiased (after all, not many such are around).
Shiva on 1st Apr 2017, 12:07am | Permalink
Wish I can choose 'thums up' more than once - literally, everything I wanted to say.
Josh on 31st Mar 2017, 9:30pm | Permalink
Thanks for the generous praise, Raghu. :)

And by all means, disagree with me. The more the opinions, the richer is the discussion. Only, it gets a tad suffocating when I'm expected to drop my perspective. Otherwise I quite enjoy contrasting opinions.
Hari on 31st Mar 2017, 7:41pm | Permalink
>>
Because heaven knows we could use a role-model who's more than a moustache.
>>

Your reviews a pleasure to read Josh !

ADVERTISEMENT
This page was tagged for
guru 2017 telugu movie
Guru (2017) telugu movie
Guru (2017) reviews
release date
Daggubati Venkatesh, Ritika Singh
Follow @fullhyderabad
Follow fullhyd.com on
About Hyderabad
The Hyderabad Community
Improve fullhyd.com
More
Our Other Local Guides
Our other sites
© Copyright 1999-2009 LRR Technologies (Hyderabad), Pvt Ltd. All rights reserved. fullhyd, fullhyderabad, Welcome To The Neighbourhood are trademarks of LRR Technologies (Hyderabad) Pvt Ltd. The textual, graphic, audio and audiovisual material in this site is protected by copyright law. You may not copy, distribute, or use this material except as necessary for your personal, non-commercial use. Any trademarks are the properties of their respective owners. More on Hyderabad, India. Jobs in Hyderabad.