So perhaps you are forewarned. The trailors were not restrained, and the opening shot is a stark black and white closeup of a woman's face, beaten almost beyond recognition. Ladies and gentlemen, the hero of the film. The phoenix who rises from the dead, the angel of revenge, the woman with one mission - to do something gloriously big for the watered-down ketchup and severed heads industry.

Uma Thurman (The Bride) has no time to kill (haha). She's out to avenge her near-annihilation and the death of her groom, unborn child and several bridesmaids. And to this end if she has to keep going relentlessly day and night, and in the process subject you to two hours of Stephen-King-on-steroids, then by God, she's going to do it. It's not every day that Quentin Tarantino comes back to make his fourth film. Like, whatever.

On The Bride's color-cordinated death-list is the Deadly Viper Assasination Squad, of which she used to be a member till things got unfriendly. Her ex-partners in crime take orders from a faceless entity with fancy rings, called Bill (David Carradine, we're told, although it could just as well be Amrish Puri).

This, by the way, just goes to show - you take a lean mean bunch of fighting machines and they'll listen to anyone who sounds cool on the phone. Charlie, Bill - it doesn't matter, as long as the orders come from a well-modulated voice, that would sound kind of stupid ordering a pizza with everything, but does a great job with summons of the kill-her-dead-with-no-witnesses genre.

So there she is, our gal: paralysed, comatose and left for dead for four years, only to wake one day, wipe off the shit that the universe has been piling on her, and go looking for her colleagues. The story begins from the end, and works its way back(ass)wards.

First we watch an excellent fight (lots of those in the film), before The Bride kills Copperhead (Vivian Fox), in front of her little daughter. Then, as she strikes the second name off her death-list, we travel back in time to watch the killing of the first - O-Ren Ishii (Lucy Liu). By this time, you've seen enough ketchup to put you off fries till next Tuesday at least. So to give you a break, the film switches to anime (Japanese animation) mode. 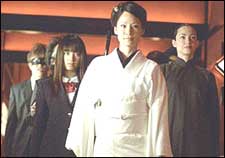 O-Ren Ishii, queen-pin of the Jap underworld, has a gory past like everyone else in this film. Both as a nine-year-old who watches her parents being killed, and as an eleven-year-old who sits on the chest of the murderer while she stabs him to death. She grows up to become one of the top assassins of the world, and the best actor in this film.

The film ends abruptly (although not soon enough) with a 'To be continued...' You see, she hasn't killed Bill yet. And there's a twist in the tale. So stick around and don't lose your lunch just yet. 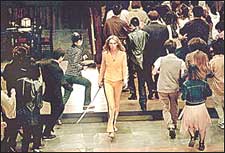 Disturbing as Kill Bill is, it relies a little too much on vulgar props - blood spurting a couple of feet high from every mangled corpse, and people impaling themselves on the heroine's sword with careless abandon. The background music contributes more to the effect of ultra-violence than all the piled-up carcasses do.

Jap-anime and black & white sequences, and traditional martial art, all handled with slick camera work - there's no denying this is a super technique of film-making. But what about that other old technique - finding a good script? Or finding any script?

The fight scenes, however, are choreographed with tender attention to detail, mood and character. And maybe, for a brief while before the gore happens, you will actually have the chance to appreciate the beautifully orchestrated sequences, one of which takes place wholly in silhouette and the other in an idyllic snow-kissed yard. But as soon as you straighten up in your seat and get absorbed in the film again, someone gets a piece of wood stuck in their noggin, or has the top of his head sliced off.

Kill Bill is like a gruesome videogame that won't end. And no amount of ramming on AltCtrlDel is going to stop Part 2.
Share. Save. Connect.
Tweet
KILL BILL SNAPSHOT
See Kill Bill full details
KILL BILL USER REVIEWS
1 - 7 OF 7 COMMENTS
POSITIVE  |  NEGATIVE |  NEWEST  |  OLDEST  |  MOST HELPFUL  |  LEAST HELPFUL
USER RATING
8.9
20 USERS
Performances
Script
Music/Soundtrack
Visuals
NA
NA
NA
NA
Can watch again - NA
Good for kids - NA
Good for dates - NA
Wait to rent it - NA
FishEye on 17th Dec 2003, 9:45pm | Permalink
Kill Bill's a QT masterpiece. And let no DM persuade you otherwise.
RATING
10
Preetam Akkineni on 17th Dec 2003, 4:54pm | Permalink
First of all let me congratulate Mr.Tarantino for the most supercalifragilisticexpialidocious movie made this year. Although I have no point(only sheer awe for QT) here's a story for Deepa, Tarantino was once asked whether he went to film school. The one-time video clerk's reply was a self-defining classic: 'No. I went to films.'


That's the reason ppl like buck, pope and me love this guy. Also his soundtracks kick ass. (Remember Michael Madsen's "Stuck in the middle with you"). So the next time a high profile Hollywood movie releases, I request the Fullhyd.com editors to send someone who's "been to the movies" not to "Writing school".


BTW I am very pleased to know that there are so many QT fans in Hyd. (Shameless self promotion here)I have a collection of over 100 classics. If you want to borrow some or just look at the list of movies, mail me at preetamchandra@hotmail.com.


RATING
10
Buck on 16th Dec 2003, 3:06pm | Permalink
ok, so i am a huge fan of Tarantino n all of his previous movies..But still, one cant deny the simple fact that Kill Bill Vol.1 is one of the most outrageously brilliant action movies made in the recent past n it just about whets the appetite for Vol.2! As for the reviewer here, i dont think u have any idea what this movie is actually about so, go get ur lessons about the samurai/martail arts flicks from history! Everything in the movie, right from the cast, action, DIRECTION, acting, SOUNDTRACK, ANIMATION, is excellent..what we've got here is, not onyl Mr.QT's 4th movie but also his most personal statement n tribute to his favourites! A nod to the martial arts/Samurai flicks by the masters who he so obviuosly admires n rightfully so!
RATING
10
Popesmokesdope on 16th Dec 2003, 8:44am | Permalink
With no due respect whatsoever Deepa, you have a fabulous felicity for ranting but you really ought to 'see' the movie before you review them. If you can't read between the lines, read the lines. Helps. Not unlike Bunuel, Tarantino makes liberal use of shocking visual imagery and a montage effect that does not entirely rely on the script but is spontaneous, loud and impetuous but at the same time extremely beautiful. If this isn't brilliance, then I don't know what else is! If you watch a movie like 'Kill Bill' in a completely clueless mode simply because its an action flick, I guess you would find it dull, boring and one-dimensional. On a scale of 1 to 5, I'd rate this movie 7! Anti neo-realistic cinema at its best.
RATING
10
Vivek Vivek on 15th Dec 2003, 6:51pm | Permalink
A typical Tarantino movie this, is bloody to the core. Coupled with amazing soundtrack and unique way of narrating a waffer thin storyline, this movie leaves you why make two parts that together span shorter then a karan johar flick. But for Uma, it would have been a big joke.
RATING
8
Beatzo Phreniac on 15th Dec 2003, 10:59am | Permalink
Dear Reviewer, the next time you want to see a movie, please remind yourself that there is a Karan Johar movie in town. It's called Kal Ho Na Ho, and reading your review of Kill Bill, I have the feeling you will looooooove Kal Ho Na Ho. Next time, if you want others laughing at you and your opinions about movies, please resort to less masochistic ways of doing so. Please do not review Vol 2 of Kill Bill for us, we can go and see it for ourselves. Thank you.
RATING
10
Psasidhar on 14th Dec 2003, 8:37pm | Permalink
Highly unconventional movie with a fabulous sound track!! So what if it is violent and doesn't cater to every ones tastes?! A treat to watch even after the censor cuts!
RATING
8
LEAVE A COMMENT
fullhyd.com has 700,000+ monthly visits. Tell Hyderabad what you feel about Kill Bill!
MORE MOVIES
Latest Reviews
Kadhanika
Shukra
Deyyam - 2021
Tempt Raja
Vakeel Saab
more
Wild Dog
Sulthan (Telugu)
Sulthan
Rang De (Telugu)
Saina
Aranya
Sashi
Chaavu Kaburu Challaga
Mosagallu
Gaali Sampath
Contemporary Reviews
Nenu Pelliki Ready
Ninnu Choodalani
Tehzeeb
Dil Pardesi Ho Gayaa
S W A T
more
Neeke Manasichchanu
Chameli
Intolerable Cruelty
Ballistic: Ecks vs. Sever
Jaanwar
Ela Cheppanu
Kalyana Ramudu
Tango Charlie
Dus
Random Reviews
Taste Of Love
Naa Alludu
The Legend Of Zorro
Three Love Stories
Swagatham
more
Jallu
Do Dooni Chaar
The Three Musketeers (3D)
Ted
Baat Bann Gayi
The Expendables 3 (Telugu)
Maze Runner: The Scorch Tria...
Baahubali 2: The Conclusion
Nawab
Krack
SEARCH MOVIES
Dissatisfied with the results? Report a problem or error, or add a listing.
ADVERTISEMENT
SHOUTBOX!
{{todo.name}}
{{todo.date}}
[
ip{{todo.ip}}
]
{{ todo.summary }}... expand »
{{ todo.text }} « collapse
First  |  Prev  |   1   2  3  {{current_page-1}}  {{current_page}}  {{current_page+1}}  {{last_page-2}}  {{last_page-1}}  {{last_page}}   |  Next  |  Last
{{todos[0].name}}

ADVERTISEMENT
This page was tagged for
Kill Bill english movie
Kill Bill reviews
release date
Uma Thurman, David Carradine
theatres list
Follow @fullhyderabad
Follow fullhyd.com on
About Hyderabad
The Hyderabad Community
Improve fullhyd.com
More
Our Other Local Guides
Our other sites
© Copyright 1999-2009 LRR Technologies (Hyderabad), Pvt Ltd. All rights reserved. fullhyd, fullhyderabad, Welcome To The Neighbourhood are trademarks of LRR Technologies (Hyderabad) Pvt Ltd. The textual, graphic, audio and audiovisual material in this site is protected by copyright law. You may not copy, distribute, or use this material except as necessary for your personal, non-commercial use. Any trademarks are the properties of their respective owners. More on Hyderabad, India. Jobs in Hyderabad.