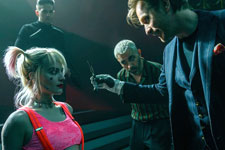 T J Reddy / fullhyd.com
EDITOR RATING
7.5
Performances
Script
Music/Soundtrack
Visuals
8.0
5.0
6.0
7.0
Suggestions
Can watch again
No
Good for kids
No
Good for dates
Yes
Wait to rent it
No
Midway into watching Birds Of Prey, I had but one doubt, which in turn led to many more questions. It went something like this: "Hey movie, who do you think you are? What are you trying to do by having a story? Don't you know you are a spin-off of Suicide Squad? I mean, you're supposed to have 'action' and please the 'fans'. People aren't supposed to connect to your characters and a plot. And where are all the shots of Margot Robbie's ass? Don't you know that's what people would come to see? People don't need well-realized cinematic elements when they watch movies; all they want are gratuitous ass shots because they don't get enough of that in the endless amount of adult content available online.

"You got it all wrong, movie. Next, you'll be telling me that a spin-off from the Transformers franchise has a story, too.

Wait a minute. The Transformers spin-off was Bumblebee. Bumblebee did have a story, a plot, and decent characters. Does that mean Birds Of Prey is going to be competent?"

After taking a deep breath and with a sense of cautious optimism, I sat through the remainder of a movie that promised the fantabulous emancipation of one Harley Quinn. But why does Harley Quinn need emancipating, you ask?

Well, a few months after the events of Suicide Squad, the Joker dumps Harley Quinn (Margot Robbie). Harley is heartbroken both because she doesn't have the company of Mr. J and doesn't get the perks that come as a part of being Mr. J's lady love. A few weeks of moping later, she decides to make a statement and prove her worth by committing crime all by her lonesome and, in turn, unshackling herself.

However, the crime-ridden hellscape that is Gotham City has a contingent of bad guys who have a bone to pick with Harley Quinn. And by that we mean they want to pick specific bones in her body and shatter them to pieces. Harley quite likes keeping her bones intact, and hence works with Roman Sionis (Ewan McGregor) and pledges to acquire a priceless diamond for him. Sionis promises her protection if she does the deed. However, the diamond finds itself in the stomach of Cassandra Cain (Ella Jay Basco), a young girl who daylights and moonlights as a pickpocket.

So, Harley needs the diamond. Roman wants the diamond. Cain has the diamond. And the film is about the various ways all the characters try to get to the diamond. Black Canary (JurneeSmollet-Bell), Huntress (Mary Elizabeth Winstead) and Renne Montoya (Rosie Perez) are also in this motion picture and have detailed backstories that you'll find out more about when you watch it.

But having a plot and a cast of characters is the bare essential of any film. So are having three acts and developing those characters with that structural framework. Birds Of Prey follows this framework to a tee. That can be a good or a bad thing, depending on what you want from this movie. For a person looking for anything better than this film's predecessor, a coherent and straightforward plot is a step up. For a seasoned movie-goer, Birds Of Prey might come off as far too pedestrian.

The film spends an excessive amount of time on set-up and set-up alone. Harley, Montoya, Sionis etc. get decent chunks of time devoted to their struggles. But these chunks aren't woven into the superstructure governing the script. They begin, they end, and they interrupt the flow of the movie each time they do. The filmmakers try and spice things up by breaking the fourth wall to a decent degree and populating the screen with eye-popping cartoon visuals, but to the movie's determent, these gags were done in Deadpool and started to wear thin by the time Deadpool 2 rolled around.

However, the movie comes into its own when it abandons all its frills and becomes a more uncomplicated tale in its second hour. In doing so, it lets its characters breathe and interact with one another, and affords its actors a chance to shine. As the interplay increases, so does the film's embrace of its inherent femininity. The movie subtly says that Harley and her crew have nothing to prove to the male characters inhabiting their film simply because a woman doesn't need to do everything a man does to be taken seriously by men. A woman is her own entity that, in itself, makes her unique. This approach is in stark contrast to something like Captain Marvel, whose ham-handed slant stifled its lead character and choked the film itself from having any personality.

Personality is something Birds Of Prey has in spades, and a lot of the credit for that goes to producer and star Margot Robbie. She is as pitch-perfect for the role of Harley Quinn as Robert Downey Jr. was for Tony Stark. She exudes charm while never sacrificing an ounce of menace. Mirroring her performance is that of Ewan McGregor as Roman Sionis / Black Mask. His villainous turn sees him channeling a capable and despicable version of Mark Renton. Admirably supporting them are Jurnee Smollett-Bell, Rosie Perez, and a genuinely hilarious turn by the hugely underrated Mary Elizabeth Winstead.

This band of no-gooder-turned-do-gooder gals have a soundtrack filled with zany pop tracks from the present day and decade powering their actions. While the original score doesn't measure up to the characters in any way, the fun visual aesthetic does. While it isn't unique, the movie adapts a pre-existing style to its world. This leads to some instances where exposition doesn't end in tedium, and keeps the action choreography electric and engaging.

And that is Birds Of Prey in a nutshell. It isn't reinventing the wheel - hell it isn't even using the wheel as a part of a car or even a bicycle. The film looks at the bike, takes a baseball bat to it, destroys it, removes the wheel, and plays with it with all the wonder and amusement the child in all of us did a long time ago. Was that novel and complex? No. Did it keep us entertained by the power of sheer simplicity? Yes. A job well done.
Share. Save. Connect.
Tweet
BIRDS OF PREY SNAPSHOT 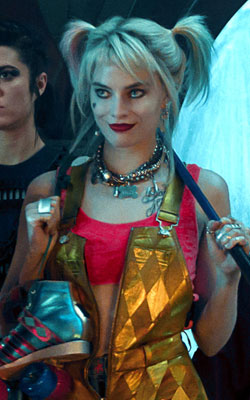 ADVERTISEMENT
This page was tagged for
Birds Of Prey english movie
Birds Of Prey reviews
release date
Margot Robbie, Mary Elizabeth Winstead
theatres list
Follow @fullhyderabad
Follow fullhyd.com on
About Hyderabad
The Hyderabad Community
Improve fullhyd.com
More
Our Other Local Guides
Our other sites
© Copyright 1999-2009 LRR Technologies (Hyderabad), Pvt Ltd. All rights reserved. fullhyd, fullhyderabad, Welcome To The Neighbourhood are trademarks of LRR Technologies (Hyderabad) Pvt Ltd. The textual, graphic, audio and audiovisual material in this site is protected by copyright law. You may not copy, distribute, or use this material except as necessary for your personal, non-commercial use. Any trademarks are the properties of their respective owners. More on Hyderabad, India. Jobs in Hyderabad.