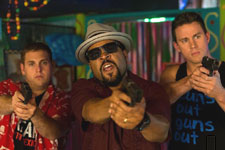 Nupur Barua / fullhyd.com
EDITOR RATING
7.0
Performances
Script
Music/Soundtrack
Visuals
8.0
7.0
6.0
6.0
Suggestions
Can watch again
Yes
Good for kids
No
Good for dates
Yes
Wait to rent it
No
Rumour had it, a little more than two years ago, that the unexpectedly popular 21 Jump Street would return with a sequel. Despite the collective groans (since we all know that it is never as good as the first time, unless you begin to compare the Godfather series with other mere movies), many would still want to revisit the unlikely bromance between a loser and a jock, since it was just so much fun.

Unfortunately, two years is a long time to hang on to a plot, and to remember all of it. Which is why, in probably a first, 22 Jump Street begins with a recap of the first film. Also, remember that 21 Jump Street itself was inspired by the television series that made Johnny Depp famous, and this recap device therefore does not seem quite so out-of-place in this franchise.

In the first movie, Schmidt (Jonah Hill) and Jenko (Channing Tatum) were undercover cops who returned to high school to successfully nab the drug dealers responsible for the corruption of young minds. Both of them had had extremely bad experiences as students themselves, so this provided them a second chance to relive their high school days as they should have.

In 22 Jump Street, the two of them are certified members of the drug squad, but they do not seem to be doing much otherwise. Their captain, Dickson (Ice Cube), decides to enrol them in college, to find the supplier responsible for the lethal drug named WHYPHY (pronounced wi-fi) that killed a student recently. And so Schmidt and Jenko assume false identities, as the McQuaid brothers, as they shift into campus to explore life as college students - a situation that neither would have been in otherwise, given their limited education and their dedication to the police force (however misplaced the loyalty).

College is exciting, and professors insist that this is where they can speak their minds. However, this living together in a testosterone-charged atmosphere brings a new complication - a crack in their relationship. Jenko is immediately accepted as the cool dude, while Schmidt is rejected over and over again, even by Maya (Amber Stevens), an art student he thinks he has a connection with after a drunken night of sex. Schmidt feels abandoned, but note the irony - Jenko did not like high school so much as an undercover cop, and Schmidt promises him that he will have a better time in college.

As they become estranged due to various factors, Jenko and Schmidt lose touch with the case that they were working on, despite a bizarre chase across the campus. Will they get back to that time and place in their lives when they worked as partners and complemented each other, with all their eccentricities and perfect lack of rhythm? Will they regain their camaraderie? Seems unlikely, but you have to watch the movie to find out.

The writers, Jonah Hill and Michael Bacall, treat this as a love story, in every conventional way possible, including through the dialogues, except that Schmidt and Jenko are not lovers. They are two very close friends and partners, but one falls prey to the temptations of a better life and thus resents the other. With wit and sarcasm, the writers make this a hilarious experience that also spoofs, in a way, a love story. Some of the jokes fall flat, though, and certain reactions and sequences are uninspiringly predictable. In short, it is almost as good as the first one, but the awkward transitions from one plot point to another set the movie back a little.

The highlight of the movie is the constant reference to sequels, and ultimately, the end credits have a spoof montage on the makers' opinion of a franchise. This alone convinces us that there may not be a third instalment of this series, but you can never have too much of a good thing. The climax is predictably shallow, although it has enough wit.

Jonah Hill, as usual, manages to steal the limelight. Since he wrote the story, it is possible that he wrote for himself a meatier role that showcases his versatility as an actor. However, unlike in the previous movie, Channing Tatum, despite his customary buffed-up physique, manages to display a wider range of histrionics. Ice Cube is a delight to watch, again, in his stereotypical portrayal of an angry black cop. Peter Stormare deserved more screen time, given that he plays the villain.

Again, the production design is more generic than specific. This time, though, there is a slight change in location in the second half, when the entire cast shifts to Mexico. This move seems a little contrived, and is pretty unnecessary. The costumes are more contemporary in this movie. The editing could have been crisper, and the music, again, is catchy.

Phil Lord and Christopher Miller work well together as directors, and a bromance such as this required the inputs of two men, not one. They have managed to make it entertaining and relevant, and you look forward to more of their joint efforts. 22 Jump Street is an important feather in their cap, and worth every minute - well, almost. Just remember to stick on for the end credits - you will not regret it.
Share. Save. Connect.
Tweet
22 JUMP STREET SNAPSHOT 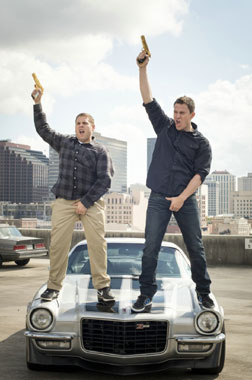 ADVERTISEMENT
This page was tagged for
22 Jump Street english movie
22 Jump Street reviews
release date
Jonah Hill, Channing Tatum
theatres list
Follow @fullhyderabad
Follow fullhyd.com on
About Hyderabad
The Hyderabad Community
Improve fullhyd.com
More
Our Other Local Guides
Our other sites
© Copyright 1999-2009 LRR Technologies (Hyderabad), Pvt Ltd. All rights reserved. fullhyd, fullhyderabad, Welcome To The Neighbourhood are trademarks of LRR Technologies (Hyderabad) Pvt Ltd. The textual, graphic, audio and audiovisual material in this site is protected by copyright law. You may not copy, distribute, or use this material except as necessary for your personal, non-commercial use. Any trademarks are the properties of their respective owners. More on Hyderabad, India. Jobs in Hyderabad.