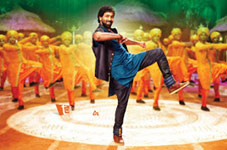 Josh / fullhyd.com
EDITOR RATING
5.5
Performances
Script
Music/Soundtrack
Visuals
6.0
7.0
4.0
6.0
Suggestions
Can watch again
No
Good for kids
No
Good for dates
Yes
Wait to rent it
No
A guy and a girl are on a date in a bar. They get sloshed and she takes him to her place. Just as she leans in for the first kiss, he excuses himself to the restroom to, ahem, congratulate himself over the girl's interest in him. He hears her shrieking and runs out to find her getting abducted. Despite heroic attempts, he fails at rescuing her. Things get murky quickly, and before you can say "discombobulate", he finds himself on the run. And he isn't sure what he is running from or why.

There. That's a great plot. But we are a wisened lot and we understand that a great plot doesn't make a great movie (did we hear someone say Manjhi?). But luckily, Dynamite goes further from its great plot and arms itself with a great script. That of an intelligent thriller.

Now that warrants some disclaimers. When we say intelligent, we don't mean it's completely logical. Far too many convenient things happen. Like how clothes stolen from a neighbouring hotel room exactly fit Anamika (Pranitha). Or how the lead pair jumps from one building to another with only red chillies to cushion their fall. We're not talking about these things. What we are talking about is the pace, the urgency, and the detailing.

Where a regular thriller would settle for incriminating evidence on a memory card, Dynamite gives you the same memory card but locked with a password. Or take the case of the lead pair drinking in the beginning. This becomes a plot point because we can't be sure of how much of what Shivaji (Vishnu Manchu) remembers is actually true. And the domain of the baddies is not some rundown godown as our films usually, lazily, depict, but a busy brothel bustling with lots of activity. The technology, gadgetry, jargon, locations are all densely detailed, and the pace keeps you from questioning the logic. The visuals, too, lend an atmosphere of desperation to the proceedings.

We have to hand it to Vishnu Manchu for choosing to produce this script. And unlike what Venkatesh did with Drushyam or Gopala Gopala, he thankfully hired a competent director (Deva Katta) to helm this one. Yet, the film underwhelms a bit. Just a little bit. Dynamite is completely worth a watch, but there are issues and these aren't exactly niggles.

Deva Katta, in an interview, said that he had modified the original script to suit "Telugu sensibilities". These modifications are among the most embarrassing parts of the movie. The original was comfortable with its premise of two urban youngsters sparking off a romance. They meet in a bar and flirt. However Dynamite begins with the heroine (eating panipuri in the opening shot) witnessing the hero stand up to an oaf who's harassing a poor vendor girl. Further, the set in which this staccato scene is shot is the most visibly fake in the film.

Also, we already discussed how the lead pair getting sloshed is a plot point, but this kind of casual drinking is by no means conducive to "Telugu sensibilities". So there is an attempt to salvage the situation by proclaiming that the leads are both virgins, and haven't even ever been out on dates, and are thus virtuous. And so there's Pranitha in micro-minis drinking up glasses and glasses of red wine past bar time with a guy she barely knows and then taking him home with her, and the sanskari among us are supposed to comfort themselves with the knowledge that this is the first time she is on a date.

The tonal shifts these contrivances bring about feel jarring to say the least. Some ineffective comedy about an unmarried couple booking a hotel room, or the extremely needless item number (the songs are a sore thumb but the background score works), merely extend the duration of the movie, and you know it's a cardinal sin to make a thriller feel longish. Like we said, these are not niggles. But all the same, they don't stop you from enjoying a well-directed intelligent thriller. Really, we wonder how insipid the movie could have been in the hands of a lesser director.

Performance-wise, Vishnu is earnest but a tad wooden. The man is making some pretty good choices (Rowdy, Anukshanam and now this), and he works really hard here (there is an end credit montage with him working out and grunting). The action sequences are well-imagined, with Master Vijayan packing a punch and Vishnu making it all work. But we wish he would act with more soul. He isn't bad, but the scripts he is choosing need more weight from the actor (something that muscle mass, sadly, can't pitch in for).

J D Chakravarthi, as the antagonist, is reassuring. The man plays sinister with an ease, and although he doesn't have much screen time, he does give the impression that the hero is up against unrelenting danger. The wig he wears, though, is terribly distracting. It appears to be the reason why Dr. Batra's has a large clientele. What is the common bald man to do if the villain of a high budget movie has to settle for a wig that looks about as real as the Tooth Fairy?

The rest of the cast is quite good, too. Nagineedu, Yog Japee, and even Lekha Washington in her two-minute role turn in pretty good work. Pranitha Subhash, though, is duly following the course charted by Katrina Kaif and Sneha Ullal. These women are all gorgeous, and the stuff of teenage dreams, but if you like your actresses with a modicum of acting talent, they can be the stuff nightmares are made of. 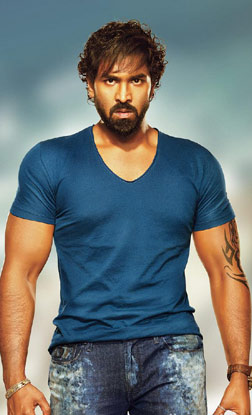 ADVERTISEMENT
This page was tagged for
Dynamite telugu movie
Dynamite reviews
release date
Vishnu Manchu, Pranitha Subhash
theatres list
Follow @fullhyderabad
Follow fullhyd.com on
About Hyderabad
The Hyderabad Community
Improve fullhyd.com
More
Our Other Local Guides
Our other sites
© Copyright 1999-2009 LRR Technologies (Hyderabad), Pvt Ltd. All rights reserved. fullhyd, fullhyderabad, Welcome To The Neighbourhood are trademarks of LRR Technologies (Hyderabad) Pvt Ltd. The textual, graphic, audio and audiovisual material in this site is protected by copyright law. You may not copy, distribute, or use this material except as necessary for your personal, non-commercial use. Any trademarks are the properties of their respective owners. More on Hyderabad, India. Jobs in Hyderabad.