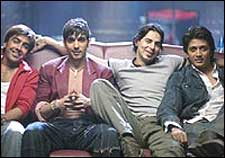 Priyanka Pulla / fullhyd.com
EDITOR RATING
7.0
Performances
Script
Music/Soundtrack
Visuals
NA
NA
NA
NA
Suggestions
Can watch again
NA
Good for kids
NA
Good for dates
NA
Wait to rent it
NA
Fight Club really begins as a kitty-party club with Vicky (Zayed Khan), Karan (Dino Morea), Diku (Ashish Choudhary) and Somil (Ritesh Deshmukh) as four rather girly-pals who hold hands and go dancing together, wear flowery prints and pastel knits, and look nothing like the swaggering, fighting-fit, raging-bulls you would expect. They are almost like a bunch of frilly little school-girls at a birthday party with a cake and a clown. The jokes they crack fall apart like flimsily designed sand-castles, and their camaraderie hits an entirely wrong note.

But once the real action begins, it's like the cast of a play quickly picking up their costumes and rushing onto the stage. Things are suddenly in order, the lights go off, the spotlight shines and the drip kicks in.

The story, like in the 1999 English flick it copies, is about a club for men who want to vent the primal male aggression that civilisation has put a plug on. But this Fight Club doesn't take itself so seriously. There are no Nietschze quotes, no attempts at disguising profound psychological drama as a movie story. Thank God.

Instead, this is just plain, cool, fun action. Rhythmic and stylized, set to electronica. The initial fights are a lame attempt at humor, but then the movie finally comes into its own.

For the break-ins, the story is this. Upon looking around their surroundings and noticing that more often than not brawls between men tend to end in frustration and a threat of "wait till i catch you alone", the four boys - Vicky, Karan, Diku and Somil - decide that a club where boys can get together and bash each others brains out unhindered, would be a brilliant success, not to mention amazing fun.

They take a quick market survey, and the idea promises to be goldmine. So they dig out a lonely, uninhabited place and start raking in the moolah. People crowd for a few minutes on the make-shift ring, and all from childhood enemies to homosexual couples accusing each other of a ditch, turn up to smash their fists in the foreground of booming foley.

Once again, the movie strays here and takes a massive diversion, a drive through the woods rather than the speeding highway. The boys shut down their club and shift base to Delhi to avenge Rohit's murdered uncle whose beloved club some goons are trying to usurp.

Sohail Khan makes a smashing appearance as Sameer, a bouncer with a hulking body who never smiles. There are the love interests, but this being a totally guys' movie, they are reduced to those store-window mannequins who won't say no to any outfit. Diya Mirza, Amrita Arora and Neha Dhupia, all have nearly equal screen-time during which they wear short and clingy gowns and, dance.

Well, Anna (Suniel Shetty) is the villian who throws in the monkey wrench, the necessary complication to tie-up the free ends of the movie. His younger brother Mohit (Yash Tonk) who has picked up enmity with the boys, gets killed after a fight with them and Anna blames them. How the boys extricate themselves is how the movie comes to its end, and is pretty smoothly done.

The fighting sequences are not too bad - they remind you a lot of the video-game 'One Must Fall' with a limited number of kicks and punches available to each player-warrior, which the user can mix and match to run his enemy down. The songs in the movie are shot on the usual exotic locales, and while the men are usually tackily dressed, the women look as juicy and colorful as a basket of fresh fruits.

Fight Club does give you that shot of adrenaline every once in while - who would't feel jumpy in his seat watching the good-guys regroup and ram the bad-guys in a vicious fight? Some bits are comical, though - more like a choreographed Russian cossack dance.

All in all, Fight Club is an energetic movie that maintains pace despite some pitfalls in the middle. The gravity-defying action, male-bonding over beer, and the flashy smiles of the lead heroes do the trick in the end. The film satisfies the action-freak club and jubilantly pulls home its kill.
Share. Save. Connect.
Tweet
FIGHT CLUB SNAPSHOT

ADVERTISEMENT
This page was tagged for
fight club 2006 480p bollywood
Fight Club hindi movie
Fight Club reviews
release date
Zayed Khan, Sohail Khan
Follow @fullhyderabad
Follow fullhyd.com on
About Hyderabad
The Hyderabad Community
Improve fullhyd.com
More
Our Other Local Guides
Our other sites
© Copyright 1999-2009 LRR Technologies (Hyderabad), Pvt Ltd. All rights reserved. fullhyd, fullhyderabad, Welcome To The Neighbourhood are trademarks of LRR Technologies (Hyderabad) Pvt Ltd. The textual, graphic, audio and audiovisual material in this site is protected by copyright law. You may not copy, distribute, or use this material except as necessary for your personal, non-commercial use. Any trademarks are the properties of their respective owners. More on Hyderabad, India. Jobs in Hyderabad.