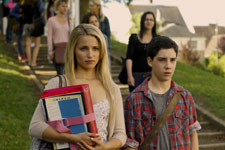 Nupur Barua / fullhyd.com
EDITOR RATING
5.0
Performances
Script
Music/Soundtrack
Visuals
6.0
4.0
6.0
5.0
Suggestions
Can watch again
No
Good for kids
No
Good for dates
Yes
Wait for OTT
Yes
Hollywood's favourite crime thrillers almost always revolve around the US Mafia. By now, any film buff worth his salt knows all that there is to know about this organisation that thrives in the United States, thanks to everything from The Godfather to The Sopranos. And these movies are best left to directors who not only know their country, but also have Italian blood. Or so we think. And then, Luc Besson - criticised for being the most non-European/Hollywoodised French director - attempts to portray a Mafia family on the run in his latest, Malavita (also known as The Family).

Giovanni Manzoni (Robert De Niro) now has a new name - Fred Blake - because he, along with his family, is in a Witness Protection Programme, supervised by FBI agent Robert Stansfield (Tommy Lee Jones). The Blakes have now shifted, for the umpteenth time, to yet another location - a small town very close to Normandy, France.

Don Luchese (Stan Carp), now in prison (thanks to Gio), has been trying all this while to get the traitor killed. His hitmen have not succeeded so far, but the Don has not given up.

While Gio is under strict instructions to stay within the premises of his new home, his family will have to try and appear as normal as possible, as they mingle with the locals without calling too much attention to themselves.

Old habits, however, die hard, and tolerance levels in all the family members are zero. When Gio's wife Maggie (Michelle Pfeiffer) realises that the manager and a few old ladies in the supermarket are whispering behind her back, she blows the place up.

Her children, Belle (Dianna Agron) and Warren (John D'Leo), enroll as students in the local school. A senior boy tries to act fresh with Belle and gets his head bashed in with a tennis racquet. Warren goes through the mandatory ragging, gathers information on some of the less popular boys in school, buys favours from them, and eventually gangs up on the bullies. The family dog, Malavita, stays put with her master, who now takes a shot at writing his memoirs, much to Stansfield's chagrin.

The writers, including the novelist on whose book the movie is based, seem to be slightly confused about what exactly the story is all about. Is it about the interpersonal relationships within the family members? Is it about Gio's guilt at betrayal? Is it about the family wanting a normal life? Is it a look at the situations that brought the family to this state, and therefore a memoir of a Mafia man? Or is it a satire on societal norms and perceptions in France?

While the storyline is simple - a family on the run, constantly pursued by hitmen - it is the subplots thrown at you that eventually let you down. There is one particular subplot in which Gio is hell bent on solving the problem of the dirty water that flows through their taps, Erin Brockovich style.

Warren and Belle are portrayed as unusual teenagers initially - so much so that there is no concept of sibling rivalry - and they love their family, but suddenly, they want to run away from home.

At no point are we told what exactly happened that put the family in this particular situation, although Gio keeps promising to let us know. And the two FBI agents who stake out the Blake home throughout the day - how do they explain their presence (and therefore blend in) in the small town?

As for the title - how is it relevant to the story (of course, the dog is named Malavita, but he is hardly there). The screenplay includes mindless, almost casual, violence, and plenty of expletives, but it tries too hard to ride on these to elicit humour.

Robert De Niro has played the role of a Mafia man so many times that he sleepwalks through this one. He does not look too interested.

Neither does Michelle Pfeiffer, who could have come across as a little feistier. Dianna Agron tries too hard, and John D'Leo shows promise. Tommy Lee Jones has his moments in the film, but he is mostly wasted. Stan Carp lacks the menacing air of a Don.

Shot mostly in CitÃ© du CinÃ©ma, Luc Besson's answer to Pinemount Studios and their ilk, the production design is vague. The feel of a small town comes across well enough, but the period is ambivalent. Stereotypes abound in both costumes and setting, though, so you can immediately differentiate between the good guys and the bad guys.

Cinematography is average, let down by the lacklustre art in the film. Technically, it shot in an almost indifferent and lazy manner. The music is interesting, though.

Malavita is not the best Mafia movie you will ever watch, thus proving the theory that only Italian Americans can make the genre an interesting one. Avoid it, unless you are a huge fan of Robert De Niro.
Share. Save. Connect.
Tweet
MALAVITA SNAPSHOT 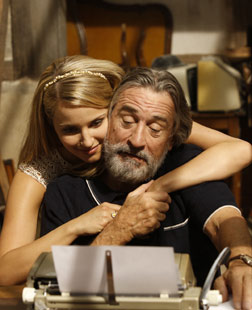 ADVERTISEMENT
This page was tagged for
movies in hyderabad
malavita movie review
Malavita english movie
Malavita reviews
release date
Follow @fullhyderabad
Follow fullhyd.com on
About Hyderabad
The Hyderabad Community
Improve fullhyd.com
More
Our Other Local Guides
Our other sites
© Copyright 1999-2009 LRR Technologies (Hyderabad), Pvt Ltd. All rights reserved. fullhyd, fullhyderabad, Welcome To The Neighbourhood are trademarks of LRR Technologies (Hyderabad) Pvt Ltd. The textual, graphic, audio and audiovisual material in this site is protected by copyright law. You may not copy, distribute, or use this material except as necessary for your personal, non-commercial use. Any trademarks are the properties of their respective owners. More on Hyderabad, India. Jobs in Hyderabad.