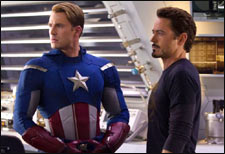 Whedon, the man who gave us Buffy The Vampire Slayer, is known for his ability to make a good story great, and that is why Marvel Studios picked him to tell this story of a group of superheroes who would not be friends except for the fact that they need to come together to protect civilisation from destruction.

In Thor, there was mention of a portal that allowed the Norwegian Gods to travel to earth. This portal is controlled by the Tesseract, an energy source, that is now in the possession of S.H.I.E.L.D. (Strategic Hazard Intervention Espionage Logistics Directorate).

When S.H.I.E.L.D. director Nick Fury (Samuel L. Jackson) arrives at the isolated facility that is studying the potential of the Tesseract, he realises that the portal can be opened from the other side, too, and that is what Loki (Tom Hiddleston) does. Loki wants to become the dictator of the world, so that, in a perverse way, there is peace all around.

He begins by stealing the Tesseract, and taking with him Dr Erik Selvig (Stellan Skarsgard) and Agent Clint Barton, a.k.a. Hawk Eye (Jeremy Renner), whose minds he now controls.

A wounded Fury quickly puts together what he thinks is the best crack team - The Avengers. He ropes in a reluctant Dr Bruce Banner, a.k.a. The Hulk (Mark Ruffalo); Agent Natasha Romanoff, a.k.a. The Black Widow (Scarlett Johansson); Tony Stark, a.k.a Iron Man (Robert Downey Jr.); and Captain Steve Rogers, a.k.a. Captain America (Chris Evans).

Each of them carries personal baggage, but they all manage to capture Loki. Thor (Chris Hemsworth), too, agrees to be a part of the mission.

The plot is simple - save Earth from Loki, and shut the portal. There is no complicated strategy, or even a concrete plan, to carry out this task. So the story goes into the interpersonal dynamics of the superheroes, and their relationships with one another. Ego tussles between these extraordinary men and women are inevitable, and each becomes suspicious of the other. Loki's subtle mind games do not help either. Till disaster strikes.

And once these superheroes get into action, there is no stopping them. Marvel Studios has left no stone unturned to ascertain that the visual effects and action are the best in the industry. Watching The Avengers in 3D is a must, since there are plenty of tall buildings, deep pits, flying shards, gigantic airships, and aliens on electronic chariots.

It is amazing how believable all the characters are, despite their bizarre costumes and unrealistic powers. Each one of them is invincible, and you know that they are going to win in the end, but you still cheer for them as they deliver corny dialogues and carry out dare-devil stunts.

Robert Downey Jr. gets top billing, of course. He lets Chris Evans take the lead, and even carries out a few uncharacteristically unselfish acts to save mankind, but it is understood that he is the main hero. And he looks it, and loves it.

Chris Evans is the nice guy, and also the voice of reason. He shares crackling chemistry with Robert Downey Jr. Chris Hemsworth does his bit, as does Jeremy Renner. The man with the best dialogues after Iron Man, however, is Mark Ruffalo. Your heart will go out to his green avatar and the vulnerability that comes with it.

Tom Hiddleston has the right amount of sleaze and cunning to be a credible villain. As Loki, he is not too menacing, but immediately unlikeable. The rest of the cast members, including Scarlett Johansson, who kicks a few unladylike punches, are relegated to the sidelines.

If you're a fan of the Marvel Comics superheroes, The Avengers will be your dream come true. Even if you're not, you will still enjoy this adrenaline-filled flick that does not allow you a moment's respite. And if you are indifferent, take pleasure in watching a movie that has more than its fair share of Hollywood's hottest actors, slugging it out - all at the price of one ticket!
Share. Save. Connect.
Tweet
THE AVENGERS (3D) SNAPSHOT 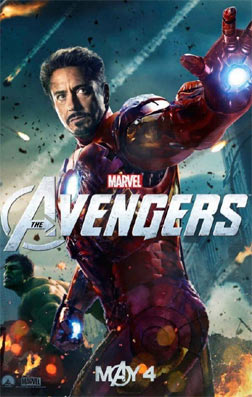 ADVERTISEMENT
This page was tagged for
The Avengers (3D) english movie
The Avengers (3D) reviews
release date
Robert Downey Jr., Chris Evans
theatres list
Follow @fullhyderabad
Follow fullhyd.com on
About Hyderabad
The Hyderabad Community
Improve fullhyd.com
More
Our Other Local Guides
Our other sites
© Copyright 1999-2009 LRR Technologies (Hyderabad), Pvt Ltd. All rights reserved. fullhyd, fullhyderabad, Welcome To The Neighbourhood are trademarks of LRR Technologies (Hyderabad) Pvt Ltd. The textual, graphic, audio and audiovisual material in this site is protected by copyright law. You may not copy, distribute, or use this material except as necessary for your personal, non-commercial use. Any trademarks are the properties of their respective owners. More on Hyderabad, India. Jobs in Hyderabad.