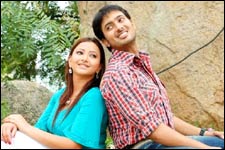 Deepa Garimella / fullhyd.com
EDITOR RATING
2.0
Performances
Script
Music/Soundtrack
Visuals
6.0
2.0
4.0
3.0
Suggestions
Can watch again
No
Good for kids
No
Good for dates
No
Wait for OTT
No
Nuvvekkadunte Nenekkadunta was supposed to have released several months ago, and was meant to be Uday Kiran's comeback. Sure enough, Uday Kiran is back in shape, and is better in form, but NN is essentially a B-grade film with zero entertainment value, and you now know that it never deserved to be released.

First of all, they didn't tell you this, but NN is a "bilingual". The first half of the movie chugs along with Telugu-speaking actors, and in the second half, you realize that everyone - including Uday Kiran - is speaking Telugu with horrible lip sync. Presumably, Tamil is the original language.

It's a story that anyone could have come up with, and by that, we mean even an attention-deficit 5th-grader. Heroine Haritha (Shwetha Basu Prasad) is the epitome of goodness, since she, being an orphan herself, has dedicated her life to serving an orphanage.

Hero Hari (Uday Kiran) is from a huge joint family, and falls in love with Haritha when he sees her feeding pigeons. But Hari has a problem - he keeps having these nightmares, that come true.

One night, he dreams that Haritha is killed in an accident on the 2nd of October, at 5pm. It might just happen, he fears, since there is a villain in the story who is smitten by Haritha. A doctor tells Hari that he must stop believing that the nightmares will come true, and that that will solve half his problems.

Hari hurriedly takes Haritha away from town, and to his own home. After a mind-numbing family sequence involving an atrociously stupid uncle played by Ashish Vidyarthi, Haritha comes back to the city for the orphans. This, despite Hari telling her that the 2nd is a dangerous date.

Hari is scared to the core, and the night before the fateful day, marries her - in the moonlight, no less.

Finally, the accident does happen, but Haritha doesn't get killed - something even more ridiculous happens.

Yes, this is a film made by someone who thought he could get away with making a really bad film, and then giving it an ending that puts off people further.

In the midst of all this, there are the comedians - AVS as a sleazy boss with a hot secretary, and Venu Madhav as a loan defaulter. None of their antics elicits so much as a smirk from you.

The writing is a joke, and the execution even worse. The film has a worn-out look, and the lead pair must take credit for being the only good thing about NN. Uday Kiran looks good, even emoting well, but films like these will just nullify whatever's left of his career. Shwetha Basu Prasad doesn't fit the role as a heroine, despite being much more expressive than many of her counterparts are. 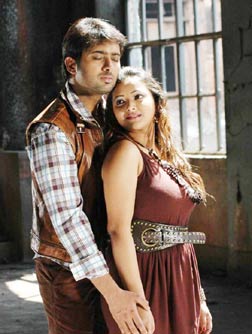 ADVERTISEMENT
This page was tagged for
shweta basu prasad nuvvekkadunte nenakkadunta
Nuvvekkadunte Nenakkadunta
Nuvvekkadunte Nenakkadunta telugu movie
Nuvvekkadunte Nenakkadunta reviews
release date
Follow @fullhyderabad
Follow fullhyd.com on
About Hyderabad
The Hyderabad Community
Improve fullhyd.com
More
Our Other Local Guides
Our other sites
© Copyright 1999-2009 LRR Technologies (Hyderabad), Pvt Ltd. All rights reserved. fullhyd, fullhyderabad, Welcome To The Neighbourhood are trademarks of LRR Technologies (Hyderabad) Pvt Ltd. The textual, graphic, audio and audiovisual material in this site is protected by copyright law. You may not copy, distribute, or use this material except as necessary for your personal, non-commercial use. Any trademarks are the properties of their respective owners. More on Hyderabad, India. Jobs in Hyderabad.