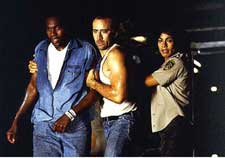 Vineeth Shastry / fullhyd.com
EDITOR RATING
7.0
Performances
Script
Music/Soundtrack
Visuals
NA
NA
NA
NA
Suggestions
Can watch again
NA
Good for kids
NA
Good for dates
NA
Wait for OTT
NA
Extremely good visuals, complemented by some splendid sound effects, have their impact when you watch a film. And when these effects are there in the beginning of the movie, they kind of set the mood for the rest of the movie. The same is the case with this Con Air. In fact, these effects, coupled with the good-'n'-nasty looks of Nicholas Cage, really have one hell of an impact on those sitting in front of the screen. The impact is such that those sitting with a pack of popcorn might just drop it, and not even bother to dust it off their laps.

At the onset, Con Air is about Cameron Poe (Nicholas Cage), a soldier on a break, who is visiting Patricia, his wife, who he surprises by catching her at a cozy pub. And for them, it's a very tender, private moment, which they celebrate by dancing to the strains of some real enchanting music. While they are at it, two lovebirds cootchie-cooing together, a few drunks do what they normally do best - be a real pain. Patricia pleads with Poe to ignore them, which he does at first. But when the same gang, later, irritates them, Poe gets into a brawl and ends up killing one of the guys who attacks him with a knife.

This lands Poe a prison sentence of ten years, which he serves as a model prisoner. After the ten years are over, the time finally comes for his release. He boards a special plane for transfer - the plane called jailbirds. But the plane is full of weirdo prisoners who've already made plans and arrangements to escape. The leader of the pack is a prisoner called Cyrus-the-Virus. Cyrus, along with his mates Diamond Dog and Nathan, takes control of the plane.

What follows is the sole guy Poe trying to wrest back control of the plane, now named Con Air. And a guy called Larkins offers support from the ground. What also follows is a lot of bloodshed, explosions and mayhem. To find out more, this is one film I'd recommend that you watch - with or without a popcorn packet. Doesn't matter as long as you hold on tight.
Share. Save. Connect.
Tweet
CON AIR SNAPSHOT

ADVERTISEMENT
This page was tagged for
Con Air english movie
Con Air reviews
release date
Nicolas Cage, John Cusack
theatres list
Follow @fullhyderabad
Follow fullhyd.com on
About Hyderabad
The Hyderabad Community
Improve fullhyd.com
More
Our Other Local Guides
Our other sites
© Copyright 1999-2009 LRR Technologies (Hyderabad), Pvt Ltd. All rights reserved. fullhyd, fullhyderabad, Welcome To The Neighbourhood are trademarks of LRR Technologies (Hyderabad) Pvt Ltd. The textual, graphic, audio and audiovisual material in this site is protected by copyright law. You may not copy, distribute, or use this material except as necessary for your personal, non-commercial use. Any trademarks are the properties of their respective owners. More on Hyderabad, India. Jobs in Hyderabad.