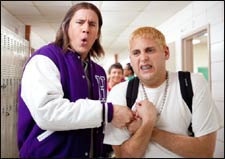 Nupur Barua / fullhyd.com
EDITOR RATING
7.0
Performances
Script
Music/Soundtrack
Visuals
7.0
6.0
6.0
6.0
Suggestions
Can watch again
Yes
Good for kids
No
Good for dates
Yes
Wait to rent it
No
With Moneyball, Jonah Hill, by his own admission, realised that he could do better than the comedy roles that made him a star to reckon with. Although he initially rejected the writing offer, he did a rethink, and decided later to jump into Jump Street and write a script that became the movie 21 Jump Street.

A sequel, if you will, to the popular series that brought Johnny Depp into the limelight more than 20 years ago, 21 Jump Street is the story of 2 extremely bad cops, Schmidt (Jonah Hill) and Jenko (Channing Tatum). They were together in high school, but were never friends, since one was a loser and the other a jock. The one thing they had in common was the fact that they missed their senior prom.

7 years later, Schmidt and Jenko become best buddies when they train in the police academy. Their rather staid patrolling rounds result in the arrest of a drug dealer, but since Jenko forgets to read him his rights, the man is let go. The captain of police, fed up with their misadventures, send them to the Aroma of Christ Church on 21 Jump Street, which is actually the secret headquarters of cops who pose as high school students to catch drug dealers and suppliers.

Schmidt and Jenko are selected only because they look young enough to be students. They are given new identities (via which they have to pose as brothers) and their job is to get "infiltrate the dealers to get to the supplier" of the new hallucinatory/potentially dangerous drug, HSF.

This story is all about a second chance to rediscover the main aspects in their adolescent lives that they missed out on, and that includes parties, proms and popularity. As they forge and break relationships and try to "get" the new generation's idea of cool (which is drastically different from their own days), Schmidt and Jenko realise that high school is never easy, not even the second time around.

The original series was a serious, intense look at drugs in high school. What Jonah Hill and Michael Bacall have done is change the genre, and made the film, 21 Jump Street, a comedy. This works on many levels, given that the premise itself - 2 grown men pretending to be teenagers - lends itself to hilarious situations and plenty of chaos. The screenplay is not without its flaws, but the bromance between the two actors more than makes up for any shortcomings.

Channing Tatum is perfect for the role of a buffed-up man. Most of the other characters react to his good looks, and overlook his lack of general intelligence. Channing Tatum is not known for his range in histrionics, so playing Jenko comes naturally to him.

Jonah Hill, on the other hand, much slimmer than he was in Moneyball, is portrayed as the loser because of his lack of conventional good looks. Nobody notices that it is he who has the brains. As Schmidt, Jonah Hill is endearing, and manages to steal the show from under the noses of other actors.

Dave Franco, who happens to be the brother of James Franco, seems to be a talented actor. As Eric, the gamin hero of high school, he portrays the insecurities that result from his dual personality - of being a conscious citizen of the world but also dealing in drugs. Ice Cube, the captain, is a delight to watch, as he mouths dialogues that stereotype him as the "angry black man".

The icing on the cake is the presence of 2 stars from the original series - both are in disguise from the very beginning, so you are not aware of their presence until the climax. In the two minutes that they make their cameo appearances, they steal the scene, and even Jonah Hill pales in comparison.

The movie was shot in New Orleans, but great pains have been taken to ensure that the city looks like any other urban area in the United States. This makes it easier to concentrate on the plot, instead of wondering about the authenticity of outdoor sequences. Although it is set in the present year, the costumes seem to be inspired from the '80s and '90s, maybe as a tribute to the original series.

Rumour has it that a sequel to 21 Jump Street is a possibility. And, as the makers learn from their mistakes and come up with a kick-ass movie (hopefully), we suggest you quickly catch this one, especially if you want to return to your youth, vicariously.
Share. Save. Connect.
Tweet
21 JUMP STREET SNAPSHOT 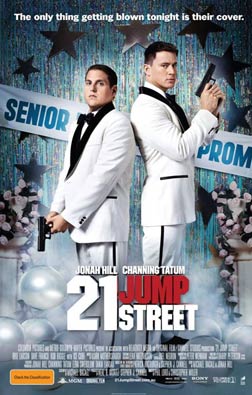 ADVERTISEMENT
This page was tagged for
21 Jump Street english movie
21 Jump Street reviews
release date
Jonah Hill, Channing Tatum and Ice Cube
theatres list
Follow @fullhyderabad
Follow fullhyd.com on
About Hyderabad
The Hyderabad Community
Improve fullhyd.com
More
Our Other Local Guides
Our other sites
© Copyright 1999-2009 LRR Technologies (Hyderabad), Pvt Ltd. All rights reserved. fullhyd, fullhyderabad, Welcome To The Neighbourhood are trademarks of LRR Technologies (Hyderabad) Pvt Ltd. The textual, graphic, audio and audiovisual material in this site is protected by copyright law. You may not copy, distribute, or use this material except as necessary for your personal, non-commercial use. Any trademarks are the properties of their respective owners. More on Hyderabad, India. Jobs in Hyderabad.