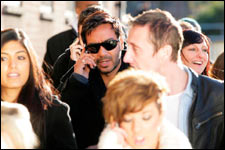 Samrat Sharma / fullhyd.com
EDITOR RATING
5.5
Performances
Script
Music/Soundtrack
Visuals
6.5
3.5
6.0
6.0
Suggestions
Can watch again
No
Good for kids
No
Good for dates
Yes
Wait for OTT
Yes
I sat down with a cup of tea to write this review. When I started thinking of good things to balance the bad, I started day-dreaming, and before you know it, the tea was cold. Now I'll have to put the kettle on again, get some more tea, because the current leaves are all gone. You know. Utter disaster.

So I blame Tezz for the lack of hot tea on my table and the excess of Zs in my review. Literally, because they added an extra Z just to make their poster look suitably menacing, and figuratively too, because let's face it, this is one boring film.

Not that you'd get any sleep in the theater, oh no. Tezz is louder than your local religious festival gone crazy, and the camera is schizophrenic enough that blinking means missing at least 2 scenes. There is an art to making a convincing action sequence, emotionally and viscerally making you invest in the outcome of the scene. That is completely and utterly missing from this film.

Tezz begins with Ajay Devgn being kicked out of the UK because he is an illegal immigrant. He returns, vowing to fight for his rights - which, you know, illegal immigrants exactly do not have. He also has 2 people (Zayed Khan, adding to the surfeit of Zs, and Sameera Reddy) who insanely follow every single one of his asinine plans. Putting a bomb on a train and then asking for 10 million pounds as ransom is not the definition of sanity, or something a human rights advocate would do, but they go along with it anyway.

Then, there is the cop on the verge of retirement. If there was a God of clichés, he would come and kiss Anil Kapoor on his moustache. To be fair to Kapoor, he plays his character with all the sincerity he can muster, possibly the best thing about the film outside of Boman Irani. His slow motion punch-up with Ajay Devgn also belies his age, so bully for him.

Mohanlal though, God. Why cast the actor of his caliber and ask him to do so little? Easy paycheck for him, missed opportunity for the rest of you. It's all hardly worth caring for. Thousands of lives in danger, and the most the film can make us care is when two dudes in their forties are punching each other on the face and the crotch. For shame.

It's a polished film, so I can't say the action is bad, per se. In fact a couple of chases come close to being very, very entertaining. It's also fun to watch Boman and Anil get into an alpha-male fight apropos of nothing. So individual parts - top. Sum of those parts, not so much.

Ultimately, your plans for the weekend should be decided by how much enjoyment you can derive from a cold cup of tea. You know the ingredients are all there, but it isn't what it could have been. Do you drink it anyway, because hot tea is for losers? Or do you turn your nose at this metaphorical cuppa and go watch The Avengers, the Oolong of action films? If you watch Tezz anyway, do bring some biscuits. Those salty and sweet ones. Mm, those are awesome.
Share. Save. Connect.
Tweet
TEZZ SNAPSHOT 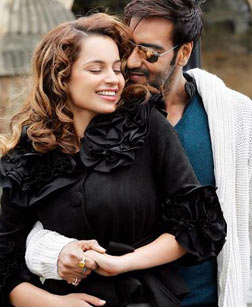 ADVERTISEMENT
This page was tagged for
tezz movie telugu
Tezz hindi movie
Tezz reviews
release date
Ajay Devgn, Anil Kapoor
Follow @fullhyderabad
Follow fullhyd.com on
About Hyderabad
The Hyderabad Community
Improve fullhyd.com
More
Our Other Local Guides
Our other sites
© Copyright 1999-2009 LRR Technologies (Hyderabad), Pvt Ltd. All rights reserved. fullhyd, fullhyderabad, Welcome To The Neighbourhood are trademarks of LRR Technologies (Hyderabad) Pvt Ltd. The textual, graphic, audio and audiovisual material in this site is protected by copyright law. You may not copy, distribute, or use this material except as necessary for your personal, non-commercial use. Any trademarks are the properties of their respective owners. More on Hyderabad, India. Jobs in Hyderabad.