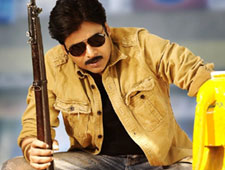 Deepa Garimella / fullhyd.com
EDITOR RATING
7.5
Performances
Script
Music/Soundtrack
Visuals
8.0
5.0
7.0
8.0
Suggestions
Can watch again
No
Good for kids
Yes
Good for dates
Yes
Wait to rent it
No
Gabbar Singh and Dabangg have a lot in common.

For instance, both movies set out to resurrect the sagging careers of former superstars.

But calling Gabbar Singh a remake of Dabangg is as unfair to the former as it is to the latter, a film that nicely merged art and commerce, packaging old wine in a new bottle so chic you gained new respect for the wine. Gabbar Singh is basically an adaptation of Dabangg to the Telugu market, which means that it is a film made the only way our filmmakers know how to - rather want to - make one.

One thing Gabbar Singh proves is that it is indeed possible to further Telug-fy Dabangg, a film that itself had the kind of plot that south-Indian audiences love to love, by giving it more straight lines than curves, and more blacks-and-whites than greys.

The theme remains that of a rowdy Robinhood-esque cop with an enemy in the form of a local goon with political ambitions. But gone are the subtleties in the writing (things are spelt out, and rarely conveyed through visual cues), and an actual plot, as also the layers in the relationships the hero originally had - with his mother, his step-dad, his brother. G Singh feels very few emotions, but everything here is about G Singh. Or, in this case, Pawan Kalyan. Indeed, Gabbar Singh has more Pawan Kalyan than Dabangg had Salman, but this isn't surprising at all.

Elements from the original are all here - mother (Suhasini), villain (Abhimanyu Singh), step-father (Nagineedu), brother (Ajay), heroine (Shruti Haasan), heroine's alcoholic father (Kota Srinivasa Rao) etc. - but tweaked to alarming simplicity, evidently the result of the makers having realized the Truth: that dishum-dishums, comedy and "powerful" dialogues are the path of least resistance in this land. As is a healthy dose of the leading man. And some megalomania (which is okay - none of us has anything against references to megastar elder brothers and other family members, as long as they are not an end in themselves).

The movie's agenda is to entertain quickly, making the most use of its existing set of elements at any given moment, like in a furious game of Tetris. While this suspiciously makes it look as much of a rush job as a designer whipping together a template just 3 minutes away from his deadline, the film works. The humour is clean, and is helped by Ali, who has much more airtime than Brahmanandam.

The action-comedy genre works well for Pawan Kalyan, who is all over the place here. Umpteen dialogues glorifying his erstwhile star status tell you that his charisma hasn't faded, and you want to believe them all, and also enjoy that tongue-in-cheek line in which he cynically calls popularity a "passing cloud".

The only problem is that the hero fails to emotionally connect with the audience. But this is a character all our leading men have played at some point in their lives, and Pawan Kalyan has no problems fitting into the khaki chokka.

Shruti Haasan, we must say, hardly looks the part, since she is too urbane-looking. Look, a langa-voni does not a Telugu village girl make, and it's a wonder none of our directors realizes this.

Most other performances are brilliant, thanks to the roles having been written right. Tanikella, Kota, Jayaprakash Reddy (who only has a cameo, but a wonderfully hilarious one), Nagineedu and Suhasini (whose mother-role is an irony, given that she romanced Pawan Kalyan's brother once upon a time) are great to watch. Abhimanyu Singh is good at being menacing, but the lip sync kills it. Ajay has a limited role, as does Happy Days' Gayatri Rao as an oversexed village belle (what the hell was that, anyway?) and Harshavardhan is around for less than 20 seconds.

Devi Sri Prasad uses his formula - one Baba Sehgal number for the hero's introduction, a couple of foreign locale songs, a mass number (his soft romantic numbers are getting scarce, though). It's all good, and Kevvu Keka is quite a scorcher. Devi Sri Prasad also tries Dabangg's Hollywood-Western-style guitar strums in places, but the attempts keep fading out, and the background score is quite indistinguishable from that of any other Telugu film.

The colour palette is quite slick, but it's obvious that mostly set-pieces were used to recreate the rural market background. In any case, Gabbar Singh is well-shot. The violence and action are run-of-the-mill sequences.

In all, Gabbar Singh doesn't go horribly wrong, and for the summer, it's a decent one-time watch.
Share. Save. Connect.
Tweet
GABBAR SINGH SNAPSHOT 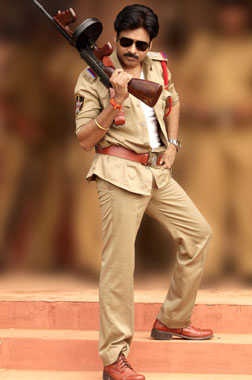 ADVERTISEMENT
This page was tagged for
Gabbar Singh telugu movie
Gabbar Singh reviews
release date
Pawan Kalyan, Shruti Haasan
theatres list
Follow @fullhyderabad
Follow fullhyd.com on
About Hyderabad
The Hyderabad Community
Improve fullhyd.com
More
Our Other Local Guides
Our other sites
© Copyright 1999-2009 LRR Technologies (Hyderabad), Pvt Ltd. All rights reserved. fullhyd, fullhyderabad, Welcome To The Neighbourhood are trademarks of LRR Technologies (Hyderabad) Pvt Ltd. The textual, graphic, audio and audiovisual material in this site is protected by copyright law. You may not copy, distribute, or use this material except as necessary for your personal, non-commercial use. Any trademarks are the properties of their respective owners. More on Hyderabad, India. Jobs in Hyderabad.