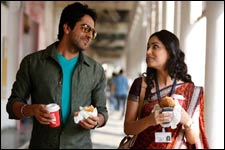 Chandrika Murthy / fullhyd.com
EDITOR RATING
7.5
Performances
Script
Music/Soundtrack
Visuals
8.0
7.0
6.0
6.0
Suggestions
Can watch again
No
Good for kids
No
Good for dates
Yes
Wait for OTT
No
Just when you think that you've had enough of Karan Johar-ish love stories and self-proclaimed bold movies from the Bhatt camp, along comes a film that restores your faith in Bollywood. Just when you start doubting the credibility and creativity of Indian directors, along comes a storyteller who dares to explore the unexplored.

Shoojit Sircar's Vicky Donor is a love story minus the larger-than-life sets and boring-to-death Karva Chauth celebrations; and a bold movie without a bare-backed babe spitting in-your-face dialogues. But most of all, it is a film that stimulates you between the ears.

The movie is about Vicky Arora (Ayushmann Khurrana), a Delhi boy who loves the good things in life. The fact that he is 25 and jobless adds to his characterization. Dr. Baldev Chadda (Annu Kapoor), a fertility specialist, finds his Alexander in Vicky, and after much cajoling and coaxing, convinces Vicky to become a sperm donor.

All is well, till our donor falls for a bank employee, Asima Roy (Yami Gautam). Now, Dr. Baldev can no longer bank on Vicky for the his sperm bank. Also reality hits the Bong wife, when she comes to know about her husband's actual "handicraft" trade.

Ayushmaan, playing a typical Punjabi boy, delivers an effortless performance. Yami is not just a pretty face, but can also act. Annu Kapoor as a pestering love-him-one-minute-hate-him-the-other doctor is convincing. However, it's the supporting cast members who deserve a pat on their backs, for their terrific histrionics. From Vicky's nagging widowed mom to Ashmi's Bong-centric and north-Indian-hating father, they are all talented actors.

Director Sircar has hit the Indian audience below the belt. Vicky Donor is about the Indian mind-set that refuses to even register anything remotely related to sex. The movie leaves us with several questions. Why are we obsessed about the perfect child when it's our imperfections that make us human beings? In our race to produce the pure Aryan race, are we forgetting to indulge in the amazing 4-letter act called love? Has our society not grown up yet to face the reality of infertility? Is donating sperm a "disgusting" act, unlike donating blood?

Vicky Donor makes you find your own answers, with just a dialogue or two, and subtle scenes, and doesn't resort to lengthy social messages. For example, in the scene in which Vicky's mother is upset with him for bringing shame to the Arora khandaan, it is his grandmother who puts it very simply that all she knows is that her grandson has made unfortunate couples happy. When Ashima leaves Vicky, her father asks her what she is angry about - is it that her husband's sperm-donation, or is it because he did not tell her about it, or is it her own insecurity of not being able to conceive?

The story, screenplay and dialogues by Juhi Chaturvedi are the soul of the movie. Chaturvedi has captured the sense and sensibilities of Delhiwallahs quite well.

The music remains in the background, and does not overpower the script. Paani Da Rang is perfect for a long Sunday night drive. John Abraham's item song, Rum & Whiskey, when the credits roll in is quite the cherry on the cake.

The only hitch with Vicky Donor is its slow pace. Dr. Baldev's long convincing act leaves both Vicky and the audience irritated. The director could have also avoided the never-ending courtship between Vicky and Ashima.

But flaws aside, Vicky Donor comes as a refreshing treat this summer.
Share. Save. Connect.
Tweet
VICKY DONOR SNAPSHOT 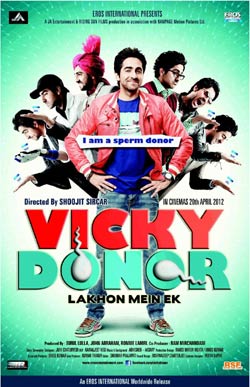 The concept is excellent, the romance is realistic and just right. And very good writing. The Bong-Punjabi stereotyping and clash of cultures was cleverly done!

The social message is beautifully brought out at the end. This film is seriously award-winning material.

RATING
8
Hari on 13th May 2012, 5:57pm | Permalink
This is indeed a pleasant surprise from Bollywood. Anu Kapoor had his best role yet. Ayushman and Yami did brilliantly well. It has become a privilege these days to get to see actors who can really act. Subject was dealt in a matter of fact style and is just a theme for the story and never becomes the story itself. Enjoyed a Hindi movie after a long time.


Pros: Top of the line performances and great direction
Cons: Too much punju slang for locals to keep up with

RATING
8
Aswattha on 10th May 2012, 4:17pm | Permalink
Nice movie with a confident Lead actor and a heroine who is refreshing and who can act and who doesn't have to depend on any shock value.
Ayushman khurana & Annu kapoor are brilliant and their chemistry is even better than the chemistry between Ayushman & Yami. Ayushman's mother & Grandmother characters are brilliant & typical caricatures of Punjabis. So are Yami's Father & Aunt's characters which are Bong caricatures. Go to the movie and have fun. This is the best movie playing in city now.


Pros: Performance & Script
Cons: Some of the jokes in Punjabi are difficult to understand

ADVERTISEMENT
This page was tagged for
vicky donor movie in
vicky donor movie in hindi dubbed movie
Vicky Donor hindi movie
Vicky Donor reviews
release date
Follow @fullhyderabad
Follow fullhyd.com on
About Hyderabad
The Hyderabad Community
Improve fullhyd.com
More
Our Other Local Guides
Our other sites
© Copyright 1999-2009 LRR Technologies (Hyderabad), Pvt Ltd. All rights reserved. fullhyd, fullhyderabad, Welcome To The Neighbourhood are trademarks of LRR Technologies (Hyderabad) Pvt Ltd. The textual, graphic, audio and audiovisual material in this site is protected by copyright law. You may not copy, distribute, or use this material except as necessary for your personal, non-commercial use. Any trademarks are the properties of their respective owners. More on Hyderabad, India. Jobs in Hyderabad.