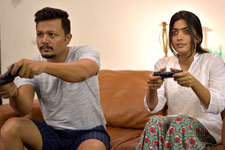 Neema Pramod / fullhyd.com
EDITOR RATING
3.5
Performances
Script
Music/Soundtrack
Visuals
6.5
2.0
5.0
6.5
Suggestions
Can watch again
No
Good for kids
No
Good for dates
Yes
Wait for OTT
Yes
"What's in a name?" asked The Bard. Quite a bit, we would say. Doesn't the name of a movie give you an idea as to what the movie would be about? For instance, a movie named Pelli Choopulu immediately tells you that it is the story of a pelli choopulu, right?

But I guess whoever named the Telugu dubbed version of the Kannada hit Chamak took the Shakespearean quote a little too seriously, for there is no other logical explanation as to why a film in which no character is named Geetha is titled Geetha Chalo. Oh wait, there is an explanation. The title is an amalgamation of the names of the two hit films of the heroine (Rashmika Mandanna) - Geetha Govindam and Chalo. Wow, how creative.

Okay, let us abide by Shakespeare's philosophy and ignore the name. Geetho Chalo is the story of Krishna (Ganesh) and Khushi (Rashmika Mandanna). Krishna is a reputed gynaecologist by day and a party animal by night. Khushi runs an event management company by day and is a party animal by night. They get married. The catch however is that both of them have kept their nightlives secrets to get "decent", "good-natured" spouses. What will happen once they realise the truths about each other? This is what the rest of the film deals with.

A troubled marriage rife with misunderstandings which eventually lead to love might be new for the Kannada audiences, which is probably why the original film turned out to be such a success. But for the Telugu audiences who have been exposed to vastly superior films dealing with a similar theme - like, say, Pellaina Kothalo or Raja Rani (dubbed from Tamil, but still) - sitting through this ridiculous film will be a chore.

Nothing about the plot is convincing. The story feels like it is written by somebody who has no clue about modern relationships. The makers want you to believe that they have made a peppy, youthful entertainer, but what they have actually done is diss the current generation for their supposed habits like drinking, and dependence on cell phones and social media, and deciding to get divorced at the drop of a hat. It is clear from the way the conflict between the couple is presented that the makers have never interacted with a modern couple.

Once Krishna and Khushi discover each other's betrayals, instead of handling things like grown-ups, they play the most juvenile pranks on each other. The misunderstandings that pry the two of them apart just as they realise their feelings for each other are terribly clichéd. Even the divorce is treated like a joke. Yeah, we get that this is supposed to be a romantic comedy, but isn't the comedy supposed to make you, well, laugh? But here, even the mandatory comedy track manages to disgust you with its disturbing takes on homosexuality and women.

Some things do work, though. The part with the poor couple who consult Krishna in the hopes of having a baby, and their subsequent interactions with him are somewhat moving. And there are a few jokes - like the running gag about a TV serial - which do elicit a few chuckles from some. The film is visually pleasing as well (cinematography by Santhosh Rai Pathaje), while Judah Sandhy's music is peppy and suits the tone of the film.

And most importantly, there is the Rashmika Mandanna factor. Her rising popularity is the reason why this dubbed version exists in the first place, and the movie doesn't disappoint in that aspect. The charming Mandanna gets the same amount of screen-time as her co-star, and she does the best she can with her badly written role. The same can be said for Ganesh's performance as well, though how much he connects with the Telugu audiences remains to be seen. The rest of the cast is passable, while Sadhu Kokila as the comedian is annoying.

Overall, Geetha Chalo could be a treat for Rashmika Mandanna fans, but for all others, the movie will feel just as ridiculous as its name.
Share. Save. Connect.
Tweet
GEETHA CHALO SNAPSHOT 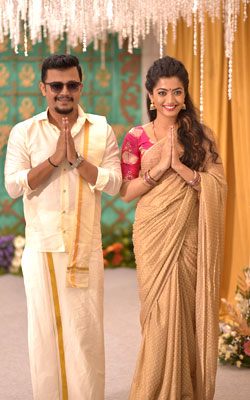 ADVERTISEMENT
This page was tagged for
geetha chalo wiki
geetha chalo full story
Geetha chalo movie rating
story of geetha chalo telugu movie
geetha chalo telugu full movie review rating
Follow @fullhyderabad
Follow fullhyd.com on
About Hyderabad
The Hyderabad Community
Improve fullhyd.com
More
Our Other Local Guides
Our other sites
© Copyright 1999-2009 LRR Technologies (Hyderabad), Pvt Ltd. All rights reserved. fullhyd, fullhyderabad, Welcome To The Neighbourhood are trademarks of LRR Technologies (Hyderabad) Pvt Ltd. The textual, graphic, audio and audiovisual material in this site is protected by copyright law. You may not copy, distribute, or use this material except as necessary for your personal, non-commercial use. Any trademarks are the properties of their respective owners. More on Hyderabad, India. Jobs in Hyderabad.