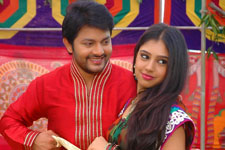 Ravi Kandala / fullhyd.com
EDITOR RATING
1.0
Performances
Script
Music/Soundtrack
Visuals
1.0
1.0
1.0
1.0
Suggestions
Can watch again
No
Good for kids
No
Good for dates
No
Wait for OTT
No
"We've seen terrible movies; could this be any worse?" is what we tell ourselves when we set out to watch a movie in Sri Mayuri, yet again. And time and again, our creative filmmakers give us a movie that leaves us with our jaw stuck to the floor due to its sheer stupidity. Now whoever says that our directors have lost the ability to surprise us need to make the weekly trip to the holy grail that this theatre has become, if only to rediscover the element of surprise.

His friends include Girija, a socialite who keeps giving him open offers to sleep with her, and Minakshi, a girl who can down 15 beers in five minutes. His parents try to get him married, but nothing proceeds beyond the customary first meeting. He then tells his friends that he fell in love with a girl Sravani (Niti Taylor), who he saw at a friend's wedding, but that the girl was already engaged and is slated to be married.

The hero's dad finally tells him that he has already fixed his wedding, and that he will see the girl onlu at the venue. Quite obviously, the girl is Sravani, and our man is overjoyed.

This is the first half - mission "Get Hero Married". The second half, if you haven't guessed it yet, is mission "Get Marriage Consummated". The heroine has some fear of the act, as some astrologer had told her that her husband would die the morning after the act. How the hero makes her overcome her fear is the second half.

The film uses every situation to show sleaze. Sample this - one of the employees of the radio station, named BS, tells his boss stories every day to explain why he comes late. These stories involve some popular heroine falling in love with the boss, or the boss raping some popular heroine. This is accompanied by clips of these heroines at their provocative best, with audio tracks from the choicest Mallu movies.

Several other lessons about "how to add sleaze to this situation" are also present in the narrative. Raja Vannem Reddy, who once directed the hit Kshemanga Velli Laabhanga Randi, has obviously lost touch.

Arya Sandeep and Niti Taylor vie for top honors for terrible acting, and outdo each other through the movie. The jury is still out on this one, and we will let you know who wins the moment we know. The others obviously agreed due to their previous association with the director, and are uniformly disinterested.

The technical departments are terrible. Several clippings from other movies are inserted at random intervals, and these clips have the quality of those recorded with a VGA mobile phone while the movie was playing on a rundown TV. Chakri screams his lungs out in the songs that he scored. One song seems to have been sung by several male singers, all of whom never passed the bathroom singing stage.

Love Dot Com is another addition to the list of movies that reflect the desperation that the film industry brings out in people. Irrespective of the quality of the project, people just want to see their name or themselves on screen. It is sad that this desperation leads them to be associated with such projects.
Share. Save. Connect.
Tweet
LOVE DOT COM SNAPSHOT