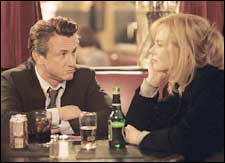 Priyanka Pulla / fullhyd.com
EDITOR RATING
5.0
Performances
Script
Music/Soundtrack
Visuals
NA
NA
NA
NA
Suggestions
Can watch again
NA
Good for kids
NA
Good for dates
NA
Wait to rent it
NA
Apart from all its other well-aimed trappings, one thing The Interpreter really gets right is the cast: Nicole Kidman as the UN language interpreter Silvia Broome, and Sean Penn as the Secret Service investigator (don’t yawn just yet) protecting her. The gorgeous Kidman and the dour-faced Sean Penn manage to translate their chemistry, which would be better utilized in an out-and-out romance, into an ever-present sense of gravity, like that of a satellite in orbiting a planet. Distant, yet unequivocally loyal.

The theme of the movie is a “finish-the-sequence” test. After playing aggressive defenders of US security (Clear and Present Danger etc.), and then aggressive defenders of world peace (Independence Day etc), Hollywood buys into the next best thing - playing pacifists in Third World countries. So Silvia Broome has an edifying past in the Matabu republic in Africa. And she has strong, near spiritually peaceable leanings.

Sean Penn is also personally evolving on the same path himself, his search having been precipitated by personal loss and trauma as contrasted with Silvia’s personal loss and trauma plus the Matabu country conscience gone awry. They meet along their separate evolutionary curves, and as behooves them, they fall gently in love (and Sydney Pollack is careful here: they don’t make love, they just sleep in each others arms and leave each other in the end).

Meanwhile there is taut action, suspense and drama. The president of Matabu is coming down to the UN, and faces a death threat that Silvia, with her murky past, uncovers. So what is her stake in all this, and is she lying or telling the truth? And if she is telling the truth, who is really responsible for the assassination plot? So the Secret Service steps in, with a little help from the CIA and the FBI, and does a commendable job of cracking the mystery while keeping intact its black suit, dark-glasses sophisticated and sheen.

The movie is actually shot in the UN General Assembly building, making the picturization so much more credible. Not sure if the permission to shoot had anything to do with the fact that it’s a Hollywood movie, but well, it does add the final touch to the flick.

The dialogues are the best - explosive and buzzing with tautness. Like a doorknob covered in static, they give off a little electric spurt that wakes you up time and again to the thought that went behind the making of this movie. Just when you are writing it off as mediocre and predictable, they manage to reclaim you right back.

Then there is the suspense that peels off in layers in the foreground of an assassination threat right inside the UN General Assembly. The story proceeds complacently, but the context, should you choose to buy in, keeps you on the edge of your seat throughout. It does manage to throw new developments at you constantly, new developments that make you think, make you try to anticipate the denouement. But then, all of it is predictable as hell. Rather like the Scream House at Prasads, you can make a reasonable estimate of what’s coming, but it still chills you when it does.

The Interpreter, at the end of the day, is an assembly line production. A predictable plot disguised slickly under a story of higher stakes, higher tension, new and improved morality. Go for the latter aspects, they will be well worth your money. But don’t, at least as a Hyderabadi watching a Hollywood movie, go for a refreshing new plot. That kind comes only at the frequency of eons. Meanwhile, this is serviceable filler.
Share. Save. Connect.
Tweet
THE INTERPRETER SNAPSHOT

ADVERTISEMENT
This page was tagged for
The Interpreter english movie
The Interpreter reviews
release date
Nicole Kidman, Sean Penn
theatres list
Follow @fullhyderabad
Follow fullhyd.com on
About Hyderabad
The Hyderabad Community
Improve fullhyd.com
More
Our Other Local Guides
Our other sites
© Copyright 1999-2009 LRR Technologies (Hyderabad), Pvt Ltd. All rights reserved. fullhyd, fullhyderabad, Welcome To The Neighbourhood are trademarks of LRR Technologies (Hyderabad) Pvt Ltd. The textual, graphic, audio and audiovisual material in this site is protected by copyright law. You may not copy, distribute, or use this material except as necessary for your personal, non-commercial use. Any trademarks are the properties of their respective owners. More on Hyderabad, India. Jobs in Hyderabad.