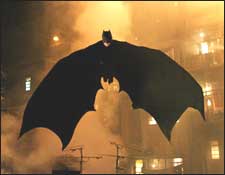 Himabindu Chitta / fullhyd.com
EDITOR RATING
7.0
Performances
Script
Music/Soundtrack
Visuals
NA
NA
NA
NA
Suggestions
Can watch again
NA
Good for kids
NA
Good for dates
NA
Wait for OTT
NA
Comic book heroes are troublesome creatures, and inviting one of them to grace the big screen is an arduous uphill task, certainly not meant for the weak of heart. For the moviemakers, while being true to the roots of the fairy-tale is one big challenge, keeping the story simple and appealing is another.

But recently, a gentleman named Sam Raimi showed that this rare feat can be accomplished, not once, but twice. And if Spiderman was a walk in the park, Batman Begins is a crawl through the cellar, in more ways than one.

Batman Begins faithfully burrows down to the origins of the Bat legend, where we learn why, as a child, Bruce Wayne fears bats, how he deals with the tragic loss of his parents, and his thoughts on rule of law vs. retribution. Young Wayne finally ends up in the company of an odd assortment of men who form the "League of Shadows", a secret brotherhood that helps extinguish decadent civilizations.

From Ras Al Ghul, the head of the League, Bruce learns all the tricks of Ninja warfare, and becomes a force to reckon with in his own right. At the end of his apprenticeship, however, he is informed that the League has its eyes set on his very own Gotham City.

Finding himself at complete odds with his leader, Bruce rebels and leaves the monastery. He resolves, however, to fight the crime and injustice in Gotham on his own terms – by becoming a legendary vigilante. Thus the millionaire Bruce Wayne overcomes his greatest childhood fears, and becomes the grim and gnarling Batman.

While the plot is fraught with irregularities such as the lack of a compelling reason for the League's existence, the screenplay suffers from poor timing and no more than trace amounts of humor. With sushi-sized bites of Eastern mysticism and the sinuous seaweed of martial arts simmering in the same pot, a stew of textbook philosophy was inevitable ("To overcome your fear, you must become fear itself"). After The Matrix, the marriage of wisdom and warfare seems to be the norm rather than the exception.

Christian Bale as Batman is neither the charming Caped Crusader that George Clooney was, nor the dashing millionaire that Adam West played on the TV version of Batman in the serenading seventies. He’s a grim, tight-lipped Dark Knight, hiding all but his gruff voice behind a black mask. While some might confuse his stiffness with austerity, his failed attempts at poise and sophistication certainly cannot be misconstrued.

That brings us to the pow-wows and the whizmo-gizmos – and there’s plenty to ponder about here. An authentic diabolical disaster is cooked up in the streets of Gotham when a microwave emitter is programmed to vaporize the entire water supply, thereby taking weaponized hallucinogen into the lungs of every man, woman and child. No points for guessing that the Dark Knight saves the day, by derailing a train with some help from an honest cop played by a quiet and understated Gary Oldman. The climax is quite stunning, though not quite as edge-of-the-seat as that of Speed or Die Hard.

The movie also gives us a hunkier and chunkier version of a legend as old as Batman himself – the Batmobile. Not sleek by any standards, the rugged vehicle nonetheless comes in real handy when the cops are hot on his heels.

With veterans like Michael Caine and Morgan Freeman shoring up the defenses, the movie couldn’t go very wrong in the acting department. Christian Bale turns in an unremarkable performance while Katie Holmes is passable as an incorruptible attorney.

Overall, the movie entertains, but lacks the un-self-conscious innocence of Spiderman that connected so well with the audience. And this one promises a sequel too, so expect a lot more of the Batman brand in the coming days.
Share. Save. Connect.
Tweet
BATMAN BEGINS SNAPSHOT

ADVERTISEMENT
This page was tagged for
Batman Begins english movie
Batman Begins reviews
release date
Christian Bale, Morgan Freeman
theatres list
Follow @fullhyderabad
Follow fullhyd.com on
About Hyderabad
The Hyderabad Community
Improve fullhyd.com
More
Our Other Local Guides
Our other sites
© Copyright 1999-2009 LRR Technologies (Hyderabad), Pvt Ltd. All rights reserved. fullhyd, fullhyderabad, Welcome To The Neighbourhood are trademarks of LRR Technologies (Hyderabad) Pvt Ltd. The textual, graphic, audio and audiovisual material in this site is protected by copyright law. You may not copy, distribute, or use this material except as necessary for your personal, non-commercial use. Any trademarks are the properties of their respective owners. More on Hyderabad, India. Jobs in Hyderabad.