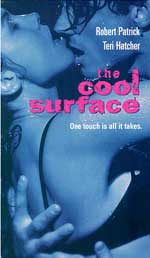 Bhargav Shastry / fullhyd.com
EDITOR RATING
3.0
Performances
Script
Music/Soundtrack
Visuals
NA
NA
NA
NA
Suggestions
Can watch again
NA
Good for kids
NA
Good for dates
NA
Wait to rent it
NA
One wonders why our esteemed distributors of porn flicks gave an appellation to this film that calls itself 'The Cool Surface' as 'Cecilia'. Apart from incurring the wrath of Simon and Garfunkel, they have also touched a raw nerve of the Teri Hatcher fans (yes, there are a lot of them), who look forward basically to the great body and aesthetic love-making in all her films. Releasing a film on such base grounds is definitely blasphemy to the Hatcher fan club. But the silver lining is, Teri Hatcher does not disappoint them at all, as we see later.

The Cool Surface is an erotic (need we say that?) thriller about Jarvis (Patrick), a talented but struggling novelist. When Jarvis presents his manuscript to his agent, the man criticizes the novel saying, "People won't read it. Put some bullets in it. I can sell bullets." Shortly afterwards, Jarvis becomes involved in a passionate affair with his neighbor, Dani (Hatcher at her anatomical best), an actress who provides the proper inspiration for the down-and-out novelist. A major film studio purchases the rights to his first novel and Dani is cast in the film based on that novel. But Jarvis and Dani play emotionally dangerous games with each other, which lead to some fatal results.

Remember that when someone says he's cool, he's automatically not? Well, that applies to The Cool Surface, too. Oh, sure, Teri Hatcher's in it... nekkid, and that's certainly a plus. But Hatcher's nude body is the only thing this movie has going for it, and that wasn't nearly enough to redeem this film, so inept in every other way that it was actively painful to watch.

ADVERTISEMENT
This page was tagged for
Cool Surface english movie
Cool Surface reviews
release date
Robert Patrick, Teri Hatcher
theatres list
Follow @fullhyderabad
Follow fullhyd.com on
About Hyderabad
The Hyderabad Community
Improve fullhyd.com
More
Our Other Local Guides
Our other sites
© Copyright 1999-2009 LRR Technologies (Hyderabad), Pvt Ltd. All rights reserved. fullhyd, fullhyderabad, Welcome To The Neighbourhood are trademarks of LRR Technologies (Hyderabad) Pvt Ltd. The textual, graphic, audio and audiovisual material in this site is protected by copyright law. You may not copy, distribute, or use this material except as necessary for your personal, non-commercial use. Any trademarks are the properties of their respective owners. More on Hyderabad, India. Jobs in Hyderabad.