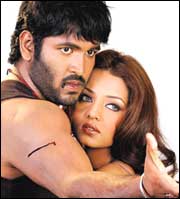 Deepa Menon / fullhyd.com
EDITOR RATING
1.0
Performances
Script
Music/Soundtrack
Visuals
NA
NA
NA
NA
Suggestions
Can watch again
NA
Good for kids
NA
Good for dates
NA
Wait for OTT
NA
Apparently it takes more than one film to launch this star son. Despite its prolonged moment in the public eye, Vishnu's career has refused to get off the ground. The optimistic makers assume this is only because we, the audience, haven't had a chance to appreciate the wonder that is Vishnu. So instead of letting the guy get on with the movie, he's made to primp for endless still shots:

Watch Vishnu flex his biceps. Watch Vishnu strike a match against his friend's stubble. Watch Vishnu put a cigarette out on his palm in extreme macho fashion. Watch Vishnu swagger about to 'energetic hip-hop beat'. Watch as he kisses a navel here, bounces off a bosom there. It's enough to make a strong man cry. For his blanky with the pink bunnies.

Suryam (Vishnu thoroughly distracted by the presence of the camera) is a boy quite unhealthily obsessed with his mother, ever since she died in a comic kitchen accident. He talks to her grave. A harmless enough preoccupation, until you realize that she was cremated. When he's not talking to random graves, Vishnu stays in jail. This is his chosen field of expertise - going to jail.

By the time Suryam is a well-grown stud muffin, he's gotten used to earning money by serving time for things he did not do. It's one way to make a living, who are we to judge? No one in this movie thinks it's a peculiar thing to do, and they refer to prison much like the rest of us would refer to a business school or crochet class. But there's one woman who opens Suryam's eyes to fundamental concepts of right and wrong.

Unfortunately, Madhulata (Suryam's savior, Celina Jaitely) is the only daughter of a very angry man. Vishnu, of course, whups the father and his henchmen. Then he does it three more times and the movie ends. If that seems like an abrupt ending, believe us, it goes on for long enough in reel time.

The action sequences are very crucial to the movie, so we're taken through slow-motion/instant-replay shots of almost every move that Suryam makes or considers making. When he's not fighting he's carrying young women on his shoulder and thrusting his hips at the camera. There are plenty of songs in Suryam, but after the 6th one it doesn't hurt anymore.

Some other actors make an appearance during the film, like Vedaa, Sunil, Bramhanandam, Venu Madhav and papa dearest, Mohan Babu. The comedy tracks are abundant and blood-curdling. The only way you'd be able to sit through all of Suryam is if someone held a gun to your head. And pulled the trigger.

ADVERTISEMENT
This page was tagged for
Suryam Telugu Full Movie download
movierulz tulugu movies
baaghi 2 full movie tulugu
suryam Telugu movie download. movierulz
suryam telugu cinema full movie
Follow @fullhyderabad
Follow fullhyd.com on
About Hyderabad
The Hyderabad Community
Improve fullhyd.com
More
Our Other Local Guides
Our other sites
© Copyright 1999-2009 LRR Technologies (Hyderabad), Pvt Ltd. All rights reserved. fullhyd, fullhyderabad, Welcome To The Neighbourhood are trademarks of LRR Technologies (Hyderabad) Pvt Ltd. The textual, graphic, audio and audiovisual material in this site is protected by copyright law. You may not copy, distribute, or use this material except as necessary for your personal, non-commercial use. Any trademarks are the properties of their respective owners. More on Hyderabad, India. Jobs in Hyderabad.