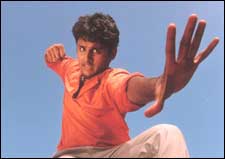 Mithun Verma / fullhyd.com
EDITOR RATING
5.0
Performances
Script
Music/Soundtrack
Visuals
NA
NA
NA
NA
Suggestions
Can watch again
NA
Good for kids
NA
Good for dates
NA
Wait for OTT
NA
Once you're inside the theater for this one, it is assumed that you will not remember the gazillion Tollywood special effects movies, and how painful they made our lives before.

You will also refrain from laughing out loud when:

(1) Nitin is flying through realms that remind you of corny Winamp visualisations.
(2) Charmy is forgetting the fact that she's not the one who's supposed to be acting like an ape.
(3) Your neighbour is reverently slapping himself whenever somebody on the screen says, "Sri Anjaneyam."

Anji (Nitin) is a regular village Joe. Regular, because anybody could've done this kind of acting. Villager, because when a snake bites the heroine, he not only sucks out the poison, but also chews some green stuff and rubs that on her. Kinky, yes, we know.

However, there's one quality of his that makes him different from all the villagers. He's a hardcore devotee of the Ultimate Power; the Power than can make or break anything; the Power that has served humanity in the past; the Power that he wishes he possessed. But praying to Krishna Vamsi and the powers of a director doesn't quite help him. He still cannot act well.

The other special quality of Anji is his blind faith in Lord Hanuman. Anji lives in a temple, and loves to talk and share his life with his favorite God. That basically means that he's not good at anything else in life. He gets kicked around for that, and rightly so. Anybody who shies away from the body of that heroine (Charmy) needs some sense to be kicked in.

All this changes when the local politician wants to dig up the temple. There's a granite mine under that temple and he wants it. But how can an evil politician get away with his diabolical schemes? Unless, of course, if it's in real life. This isn't, so his plans don't succeed. Who stops him? Anji. But not this one, the real Anji - Lord Hanuman - in the form of Arjun.

Arjun teaches Anji to fight against evil. He teaches him not to be afraid of anything. He also teaches Anji to pretend to fly while the screen in the background keeps changing. Pity he couldn't teach him how to act.

Meanwhile, there's this dam for which Prakash Raj and Ramya Krishna die in the beginning. The local politician gets them killed. Suddenly, in the climax, this dam comes back, and our superhero Anji helps in rebuilding it. This, we presume, was the real story. Whole five minutes of it.

Krishna Vamsi has gotten carried away with his string-fight sequences and his FX team. Too much involvement with that and very little in core components like the script, the plot etc. has left Sri Anjaneyam looking completely lost.

In a semi-religious flick, it becomes imperative that the viewer feels a divine presence at least once in the movie. The only divine power this movie offers is the curvaceous body of a young maiden. Charmy has been thoroughly exploited in the movie.

Okay, so maybe some of the stunts and the graphics were decent, but without a substantial plot, nothing will survive. Yes, not even Tollywood movies, despite all the popular beliefs.

In short, only the Gods can rescue this movie. But there's not enough reason for them, too.
Share. Save. Connect.
Tweet
SRI ANJANEYAM SNAPSHOT

ADVERTISEMENT
This page was tagged for
Sri Anjaneyam telugu movie
Sri Anjaneyam reviews
release date
Arjun, Nitin
theatres list
Follow @fullhyderabad
Follow fullhyd.com on
About Hyderabad
The Hyderabad Community
Improve fullhyd.com
More
Our Other Local Guides
Our other sites
© Copyright 1999-2009 LRR Technologies (Hyderabad), Pvt Ltd. All rights reserved. fullhyd, fullhyderabad, Welcome To The Neighbourhood are trademarks of LRR Technologies (Hyderabad) Pvt Ltd. The textual, graphic, audio and audiovisual material in this site is protected by copyright law. You may not copy, distribute, or use this material except as necessary for your personal, non-commercial use. Any trademarks are the properties of their respective owners. More on Hyderabad, India. Jobs in Hyderabad.