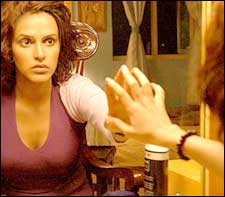 Or it takes a screenplay stolen word for word.

Siskiyan is a frame-by-frame remake of the classic Death And The Maiden, the story of a woman desperate to wreak a violent and fitting retribution for the crippling rape she was put through by a man she never saw. A movie with only three characters and a dog, it manages to create the glaring ambience of an interrogation room, a place where the deepest, murkiest secrets are constantly excavated in painfully clinical surroundings. The whole movie is actually about an interrogation, forced upon the character of Dr. Vishwas (Sonu Sood) by Ayesha (Neha Dhupia), in the bewildered presence of her husband Javed (Sachin Khadekar).

The movie begins with Ayesha sitting on the steps of her isolated house, smoking away with the haunting ghazal "Kya Hua Kab Kahaan Nahin Maloom Kaun Tha Darmiyaan Nahin Maloom" playing in the background. The song turns out to be an extremely effective tool in paraphrasing her despairing state of mind in the movie. She is on tenterhooks every time a vehicle passes by her house, and shuts off her lights, fetches a revolver and braces herself in case it is some danger.

Javed finally arrives home, driven by a stranger who has given him a lift while he was stranded with a burst car tyre. Ayesha opens the door and disappears inside to eavesdrop on the conversation. She is mad at Javed because he has been appointed onto a commission to investigate a case of rioting a few years back, which she had been a victim of. The rioters had been seeking Javed, and she, his then girlfriend, was captured and tortured to reveal his hideout. The rioters had let her go when she didn't confess, but after she was admitted into the hospital in a relief camp, wounded and temporarily blinded, a doctor, her supposed savior, raped her repeatedly.

The stranger leaves and comes back to return an envelope belonging to Javed when Ayesha recognizes, by his voice and the characteristic phrases he uses, that he was the man who raped her. Later when Javed is asleep, she attacks him, ties him to a chair and begins to torture him to extract a confession.

Javed is shocked and ambivalent about whether to believe his imbalanced wife or the stranger who helped him. She insists she knows him by the scent of his body that, amplified in those three days of excruciating torture, has lingered in her mind all these years.

The movie stretches for two hours. Neha Dhupia plays the part of a self-righteous, raging victim with a surprising amount of involvement. The other characters simply don't have such meaty roles, and are just plain believable. Sonu Sood is often forced to slip into the cliché and stereotype of the typical rapist who unleashed the torture only to get some fun out of the helpless victim.

By copying the screenplay of another brilliantly intricate movie, Siskiyaan manages to touch on enough nuances to bring out the complexity of the whole event. Where it differs, seems to be the point where it collapses into stereotypes. In one scene, Ayesha waves Vishwas's daughter's photograph at him and asks him what the difference is between his daughter's thighs and her own. The 'maa-behen' comparison apart, the depiction in the whole movie is refreshingly direct and in-your-face.

The focus on the victim's character and emotions is probably the crowning point of the movie. Others become marginal, pawns in the hands of the victim who takes over. Dhupia's character therefore rises to top and is displayed in sharp relief, under the spotlight. It's a monologue of her emotions and actions, and there is no resistance to any of it. The movie manages to become a stream-of-consciousness depiction of the path a rape victim would choose if there were no law, society or morality to restrain her.

All in all, not your typical Saturday night fare if you want to relax and unwind. Dead serious, experimental and possibly morbid, this is a movie you don't want to stroll into by mistake. For best results, check out all the movies showing in town this week and choose this with full foreknowledge, at your own risk. And then, enjoy the show!
Share. Save. Connect.
Tweet
SISKIYAAN SNAPSHOT

ADVERTISEMENT
This page was tagged for
Siskiyaan movie story
siskiyan film wiki
Siskiyan movie
siskiyaan hindi movie download free
siskiyaan wiki
Follow @fullhyderabad
Follow fullhyd.com on
About Hyderabad
The Hyderabad Community
Improve fullhyd.com
More
Our Other Local Guides
Our other sites
© Copyright 1999-2009 LRR Technologies (Hyderabad), Pvt Ltd. All rights reserved. fullhyd, fullhyderabad, Welcome To The Neighbourhood are trademarks of LRR Technologies (Hyderabad) Pvt Ltd. The textual, graphic, audio and audiovisual material in this site is protected by copyright law. You may not copy, distribute, or use this material except as necessary for your personal, non-commercial use. Any trademarks are the properties of their respective owners. More on Hyderabad, India. Jobs in Hyderabad.