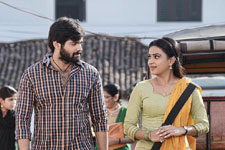 Ravi Kandala / fullhyd.com
EDITOR RATING
4.0
Performances
Script
Music/Soundtrack
Visuals
6.0
3.0
4.0
6.0
Suggestions
Can watch again
No
Good for kids
No
Good for dates
No
Wait for OTT
No
They say that art does not recognize boundaries and that it is the same in any language. Why then are we still wondering if Tungabhadra is a straight Telugu movie or a dubbed Tamil one? Is it because of the bearded hero? Or his bearded cohorts? Or because of Sathyaraj? Or because of the Subramaniapuram-type atmosphere created through the movie?

Whatever the reason, we believe that Srinivas Krishna Gogineni (the director of this film) is maha-inspired by the rural films that the Tamil industry churns out. He is also someone who has visions of an artsy flick with some commercial values and a social message thrown in. Whether he succeeds in realizing those visions is a different question.

Tungabhadra is set in a village in Andhra Pradesh. The village has two factions - one belonging to Ramaraju (Sathyaraj) and the other supporting Paiditalli (Kota Srinivasa Rao). The two factions support different political parties, and whoever is in power can kill people from the other faction without the slightest hesitation.

Srinu (Adith) is one of Ramaraju's trusted henchman. Ramaraju asks Srinu to follow his daughter Gowri (Dimple Chopade) and find out if she's in love with someone. As fate would have it, Srinu and Gowri fall in love with each other instead. However, Srinu does not let his emotions out as he does not want to fail Ramaraju. The denouement of the rivalry and the love story forms the remaining story.

There are reasons why certain films are set during certain periods. Tungabhadra, however, has no reason to be set in the 1980s (or even the early '90s). The backdrop appears shoehorned in only to enable the director to create a rustic milieu and recreate the atmosphere from his favorite Tamil movies. The songs are all shot in poetic slow motion, as befitting movies from the '90s.

The film is slow and rambles along with completely unnecessary comedy tracks and songs. The love story develops through sly glances and a couple of heroic deeds - you can hear the groans in the theatre when the heroine falls for the hero in one heroic moment. The undercurrent of violence is brought forth only whenever it is convenient, and for a story set amidst such a violent background, the tensions just don't simmer enough.

Adith acts well, but his bearded look seems more like it was groomed in Habib's rather than in the bylanes of a village. Everyone else in the cast too does well, especially Sathyaraj. The technical values are good, and the film is shot well. The songs are speedbreakers, except for the one background song written well.

We were still wondering why the movie was named Tungabhadra, and happened to chance upon an online synopsis of the film. Apparently, the film is based on the concept that when two mighty rivers Tunga and Bhadra can come together and flow as one, why can't two people stay in peace. We couldn't make much sense of out of either - the synopsis or the movie.
Share. Save. Connect.
Tweet
TUNGABHADRA SNAPSHOT 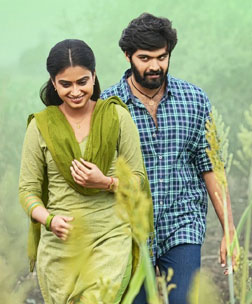 ADVERTISEMENT
This page was tagged for
Tungabadhra fll move dwonlod
thungabadra full move downlod
tungabhadra full movie telugu in online
telugu movie tungabhadra full movie
tungabhadra telugu full movie download
Follow @fullhyderabad
Follow fullhyd.com on
About Hyderabad
The Hyderabad Community
Improve fullhyd.com
More
Our Other Local Guides
Our other sites
© Copyright 1999-2009 LRR Technologies (Hyderabad), Pvt Ltd. All rights reserved. fullhyd, fullhyderabad, Welcome To The Neighbourhood are trademarks of LRR Technologies (Hyderabad) Pvt Ltd. The textual, graphic, audio and audiovisual material in this site is protected by copyright law. You may not copy, distribute, or use this material except as necessary for your personal, non-commercial use. Any trademarks are the properties of their respective owners. More on Hyderabad, India. Jobs in Hyderabad.