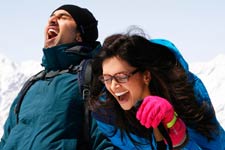 Nupur Barua / fullhyd.com
EDITOR RATING
6.0
Performances
Script
Music/Soundtrack
Visuals
7.0
5.0
7.0
7.0
Suggestions
Can watch again
Yes
Good for kids
No
Good for dates
Yes
Wait to rent it
No
The urban youth of today is unapologetic and almost ungrateful for the benefits that they have access to. Therefore, movies today do not feel the need to moralise or preach, or to get too intense, like the movies of the 1970s, 80s and 90s. If you are rich, flaunt it. If you are a flirt, celebrate it. If you are a woman, you should use abusive language. And the young audience loves all this.

Which is why you will see teenagers and young couples throng to the theatres this weekend, for Yeh Jawaani Hai Deewani. Of course, Ranbir Kapoor is a huge attraction - people relate to him, and he is nothing short of a superstar in that sense. Plus the songs have been playing on television and radio for the past couple of months, and have become huge hits. Is the trek to the ticket counter worth it? Almost.

The movie begins with an anonymous hand writing out the names of invitees on wedding cards. One such invite (complete with a hamper, very Koffee With Karan style) finds its way to Naina (Deepika Padukone), a doctor, who immediately goes on a trip down memory lane. Through her, we are introduced to Aditi (Kalki Koechlin), eight years ago.

Aditi and Naina were classmates in school, and not the best of friends. Naina's parents want her to be a doctor, and she is buckling under the pressure. When Aditi mentions that she is headed out on a trekking trip the next day, Naina uncharacteristically signs up for the same trip.

And she meets Aditi's best friends from school, Bunny (Ranbir Kapoor) and Avi (Aditya Roy Kapur). Naina reconnects with her old classmates, and spends the rest of the trip discovering herself, albeit with apprehension. She falls in love with Bunny, but recognises his wanderlust as the reason they should not be together.

Now, eight years later, when these friends reunite for Aditi's wedding, Naina is a more composed and confident person. So is Bunny, but he suddenly finds himself questioning the choices he has made so far.

What Ayan Mukerji has tried to do with this story (that he has written) is not very different from what Zoya Akhtar wanted to do with Zindagi Na Milegi Dobara. A trekking trip in Manali is not the same as a road trip in Spain, of course, but the quest is similar. Young, urbane, hip Mumbai kids try to figure out where their lives are headed, and what they should be doing to achieve their goals. Some are successful, some are not. In the process, they unwittingly hurt a few people, and spoil a few relationships.

The only problem with the story, then, is the fluff. Ayan Mukerji wants to present a realistic portrayal of life, but falters when it comes to showing any ugly bits. Everything is glossy, and everybody is perfect - Naina's paranoid mother (Dolly Ahluwalia), Bunny's exasperated stepmother (Tanve Azmi), his dithering but affectionate father (Farooq Sheikh) and even the vamp Lara (Evelyn Sharma).

Practical obstacles like lack of money or the loss of a job/investment are smoothened out without too much effort. Situations that the characters find themselves in are not only predictable, but also conveniently placed to come back again and again to the core issue of how one should follow one's dreams.

The heavy-duty dialogues that pop out once too many times could have been done away with, and that would made this a perfect fun movie. The chemistry among the actors alternates between crackling and non-existent, though.

Madhuri Dixit in a guest appearance as an item girl in the song Ghagra appears in the first ten minutes, and the surreal setting may throw you off track (from where the movie is going, that is). All the songs are definite hits, especially Budtameez Dil. Pritam Chakraborty is on a roll with this one.

The production design is decent, but that may also be due to some good cinematography. Locations like Manali and Paris are shot very well. Costume design is stylish, for most part, but nothing groundbreaking. In fact, Ranbir's clothes are quite jaded, especially when the story is set in 2004. The makers have not attempted to define that period visually - unfortunate, because that could have added some texture to the movie.

Ranbir Kapoor is nothing less than a delight. Having proved his mettle over the past few years, he may surprise you with his role - it is considerably less intense that either Rockstar or Barfi, but what catches your attention is the ease with which he portrays Bunny.

Deepika Padukone is monotonous, mostly, and while the character of Naina is not exactly that of a wild woman, she could have added some emotion to her dialogue delivery. Kalki Koechlin is marvellous, and Aditya Roy Kapur is not bad himself. Kunaal Roy Kapur shines as the bespectacled groom.

Farooq Sheikh plays the only character in the movie who has some layered emotions. His short appearance is memorable. Tanve Azmi and Dolly Ahluwalia do justice to their roles. Rana Daggubati looks awkward and out of place in his 10-second role.

Yeh Jawaani Hai Deewani is a one-time watch, definitely. Few things can beat the thrill of watching Ranbir Kapoor dancing on the big screen, not even a flimsy script. He is, after all, the saving grace of the movie. You may come out with mixed feelings about the story and the resolution, but you will remember Ranbir Kapoor's smart one-liners.
Share. Save. Connect.
Tweet
YEH JAWAANI HAI DEEWANI SNAPSHOT 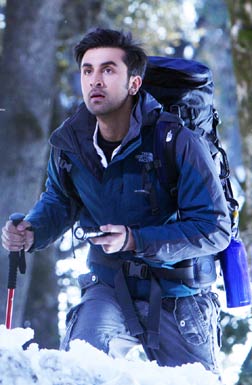 ADVERTISEMENT
This page was tagged for
yeh jawani hai deewani full movie
Yeh Jawaani Hai Deewani hindi movie
Yeh Jawaani Hai Deewani reviews
release date
Ranbir Kapoor, Aditya Roy Kapur
Follow @fullhyderabad
Follow fullhyd.com on
About Hyderabad
The Hyderabad Community
Improve fullhyd.com
More
Our Other Local Guides
Our other sites
© Copyright 1999-2009 LRR Technologies (Hyderabad), Pvt Ltd. All rights reserved. fullhyd, fullhyderabad, Welcome To The Neighbourhood are trademarks of LRR Technologies (Hyderabad) Pvt Ltd. The textual, graphic, audio and audiovisual material in this site is protected by copyright law. You may not copy, distribute, or use this material except as necessary for your personal, non-commercial use. Any trademarks are the properties of their respective owners. More on Hyderabad, India. Jobs in Hyderabad.