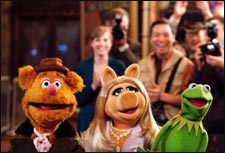 Samrat Sharma / fullhyd.com
EDITOR RATING
10
Performances
Script
Music/Soundtrack
Visuals
10.0
9.0
10.0
10.0
Suggestions
Can watch again
Yes
Good for kids
Yes
Good for dates
Yes
Wait for OTT
No
There is a telling scene early on in The Muppets, in which the eponymous felt characters learn that they are not as famous as they used to be. In true Muppets fashion, they take that as a sign to get themselves back together, and put on a show that brings relevance back.

In doing so, The Muppets prove to a new generation of movie-goers that an honest-to-goodness show mounted on the sheer will and enthusiasm of puppets can be the most fun you will have this year.

Jason Segel and collaborator Nicholas Stoller have kept their vision alive to bring The Muppets to the big screen for a new generation of kids, making it bigger and injecting a lot of human characters. Jason Segel plays Gary, who, with his brother Walter (Peter Lunz), is a huge Muppets fan. While Walter always remains the steadfast fan, Gary is now attempting to be an adult, with his long-term girlfriend Mary (Amy Adams) trying to support him.

The twist is that Walter is a Muppet, too. It is never acknowledged, but we know as soon as we see this new Muppet that it is his calling to join the band. This early on, with the humans interacting majorly, and not a lot of Muppets around, the film still feels right - the jokes and the sights hit the right tone, and the music and sets have a Broadway level appeal to them that is unmistakable.

When Walter visits the now-shut-down Muppet Studios, and unearths a plan by Tex Richman (Chris Cooper) to turn it into an oil-drilling operation, it is only a matter of time before both Walter and Gary team up with Mary to convince Kermit to get the team back together and put up a TV show that convinces executives to continue The Muppets and save their studio.

This kicks off a "get the band together" movie right in earnest, and results in some of the film's best moments. Joining Gonzo, Fozzie and Rowlf are tons of cameos from TV and film, including a brilliant Zach Galifianakis, and Community's Donald Grover and Ken Jeong being awesome.

As more and more Muppets join, the movie starts gaining speed, with increasingly charming moments of return and current state of affairs.

Midway, it changes into a backstage antic film, where the rush to put on the show becomes the crux, and without missing a beat, the Muppets utilize their momentum to deliver a very solid performance - where music, slapstick, puns and various different stunts culminate in one funny rehearsal after another.

The pace slackens, as the 3rd act pay-off is never as strong as the 2nd act shenanigans, but this is what Muppets do - a fun time and an opportunity to mount increasingly hilarious interludes are more important than something as silly as a sports movie moment.

The music is great - you will, doubtless, find some personal favourites. All the songs are used well, with some classics, some modern pop-song parodies, and some originals. The music choices are very well balanced, as is the rest of this joyful little show where puppets with limited movement can outshine any CGI creature in terms of pure character.

Yes, you can find some faults, and doubt the decisions to make the human time the size that it is, or bemoan the lack of a clear arc for Walter, but those are just petty. Any man must be dead inside to sit down and find faults instead of taking joy in these wonderfully brought-to-life friends who exist solely to entertain.

Even if you don't know or remember Kermit, Miss Piggie, Fozzie, Rowlf, Sam, Beeker, Rizzo, Waldorf, Dr. Teeth and everyone else, you will find that this film will melt even the stoniest of hearts, as they put on a vaudeville act to outdo every single grim and dark film made this year.
Share. Save. Connect.
Tweet
THE MUPPETS SNAPSHOT

ADVERTISEMENT
This page was tagged for
The Muppets english movie
The Muppets reviews
release date
Jason Segel, Amy Adams
theatres list
Follow @fullhyderabad
Follow fullhyd.com on
About Hyderabad
The Hyderabad Community
Improve fullhyd.com
More
Our Other Local Guides
Our other sites
© Copyright 1999-2009 LRR Technologies (Hyderabad), Pvt Ltd. All rights reserved. fullhyd, fullhyderabad, Welcome To The Neighbourhood are trademarks of LRR Technologies (Hyderabad) Pvt Ltd. The textual, graphic, audio and audiovisual material in this site is protected by copyright law. You may not copy, distribute, or use this material except as necessary for your personal, non-commercial use. Any trademarks are the properties of their respective owners. More on Hyderabad, India. Jobs in Hyderabad.