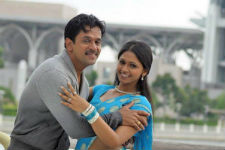 Kritika Deval / fullhyd.com
EDITOR RATING
1.0
Performances
Script
Music/Soundtrack
Visuals
1.0
1.5
1.5
1.0
Suggestions
Can watch again
No
Good for kids
No
Good for dates
No
Wait to rent it
No
Why? Just... why? No, really, why?!? Did the universe need a Southie+cop+revenge flick so badly that it needed to raise this abomination?

Think you that we exaggerate? Just five minutes of looking at the face of Arjun (Arjun) as it traps all emotions beneath a grotesque mask, and you'll know what we are talking about. And then there is the fact that the makers seem to have leeched expressions off of the faces of even the most seasoned actors, making watching the film one of the most awkward experiences you'll face for as long as you'll remember it.

Now, what kind of story could possibly fit in so much wrongness? Well, imagine a Frankenstien tale, made by sewing up bits and pieces of dead cop films. Imagine the bits and pieces following the following sequence ??" 1) cop hero & his wife in a carnal happily ever after, 2) wife shot to death in a mafia brawl, 3) hero turning encounter specialist in the hope of destroying all those who were involved, 4) another comely female, because, let's face it, what is our hero to do with all that testosterone?

Doesn't sound all that bad. Only about a billion other films were made along the same lines, after all. But then, all of these things seem to happen for no reason whatsoever, as if the story was being made to go left willy-nilly of its desire to go right. Add to this the awful dubbing and camera work like that of a B-flick, and you have an empty theatre at the end of 10 minutes of the beginning.

The weird part is, films of this kind generally do okay when it comes to the fighting. Again, the ingredients are all there ??" lots of blood, gory and sudden ways of doing away with people, and lots of rippling cop muscles. But there again, shit gets weird, really really weird. Dig this. In his second encounter (the meeting kind) with the heroine, Arjun "encounters" (the shooting kind) three goons behind his jeep while she stands on the other side. And, guess what? She never knows! Seriously?!? By this point our credulity is stretched to breaking point, but the film doesn't let up!

There is much that tries to pass for humour, and exactly as much that fails. Emotions on the faces of actors, even those of Kota Srinivasa Rao and ilk, are almost absent, and if present, sort of scarily caricaturish, like those of puppets. The two girls, Archana and Hema, are passably pretty, and that is all that is expected of them.

The music is okay, but perhaps the softcore video right at the beginning of the film might make up for the rest of the experience for those thusly inclined.

None of this can excuse the fact that everything about this film is just plain wrong, as is even the slightest possibility of it doing well.
Share. Save. Connect.
Tweet
ARJUN IPS SNAPSHOT

ADVERTISEMENT
This page was tagged for
Arjun IPS telugu movie
Arjun IPS reviews
release date
Arjun, Archana
theatres list
Follow @fullhyderabad
Follow fullhyd.com on
About Hyderabad
The Hyderabad Community
Improve fullhyd.com
More
Our Other Local Guides
Our other sites
© Copyright 1999-2009 LRR Technologies (Hyderabad), Pvt Ltd. All rights reserved. fullhyd, fullhyderabad, Welcome To The Neighbourhood are trademarks of LRR Technologies (Hyderabad) Pvt Ltd. The textual, graphic, audio and audiovisual material in this site is protected by copyright law. You may not copy, distribute, or use this material except as necessary for your personal, non-commercial use. Any trademarks are the properties of their respective owners. More on Hyderabad, India. Jobs in Hyderabad.